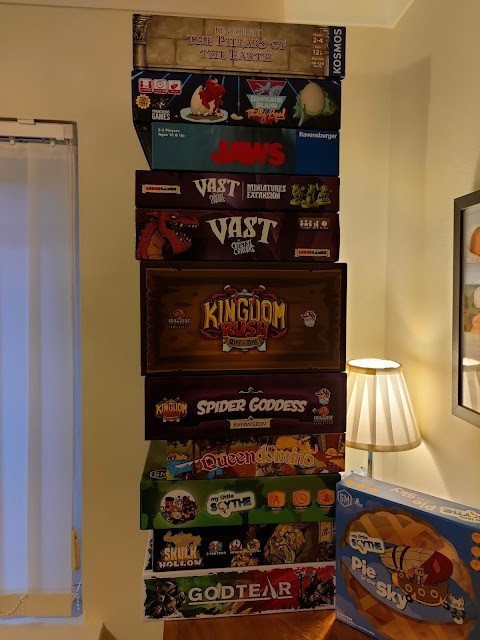 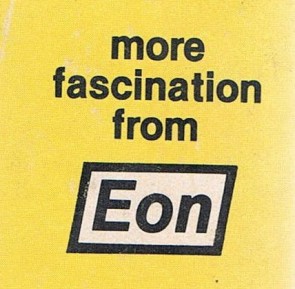 The Eon team members are absolute all stars of game design. Bill Eberle, Jack Kittredge, and Peter Olotka created more than mere board games. They designed highly interactive, innovative, incredible experiences that happened to come in cardboard boxes. And while it didn’t have an Eon emblem on the box, many consider Dune to be their best work.

I wouldn’t know. I haven’t played it.

What I have played is almost every other Eon game. Credit where credit’s due, Fantasy Flight Games has done an excellent job at keeping Eon’s classics in print. So while the rest of the TWBG staff is writing about Dune itself I want to cover some other Eon notables. Their games share a good bit of DNA to the point where playing one can affect how you play the others. Who knows, playing these might just give you the edge over your friends going into Dune. I’m certainly hoping so. Hoax is the simplest game on this list by a solid margin. Everyone has a secret role. Players claim roles that may or may not be theirs in order to get resources, which they spend to guess at other players’ roles in order to eliminate them. The kicker is that every claim you make has to be permitted by your peers. If the table, really, truly doubts your role claim and the majority of them vote to challenge you stand to lose access to that role for the rest of the game. Unless of course you were telling the truth, in which case you flip your role card in triumph because you just won the entire game.

It’s this dynamic that keeps the game on a razor’s edge. A round of Hoax can take as long as 30 minutes or end on the first turn. It can be a war of deductive attrition or be won on a single bold bluff. It’s exactly as explosive as your group is. If you’ve ever enjoyed a game like Coup or any of its imitators but wished it had more teeth, this is your game.

Variable play time, group driven, high interaction. These are pillars of Eon’s design, and Hoax is the easiest (and cheapest) entry point. 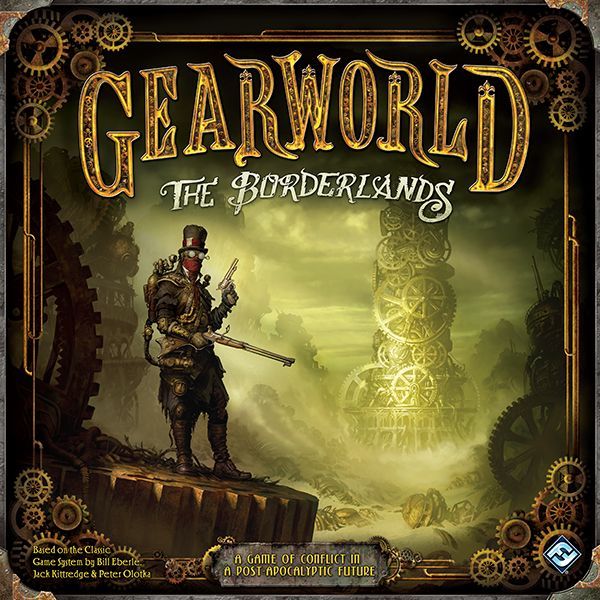 Borderlands has had an interesting life cycle. It initially released themed as a post-apocalyptic game of barbarians rebuilding cities. When FFG picked it up they renamed it Gearworld and sold it as a post-post-apocalyptic steampunk game about building...sky towers? But they still transport things with horses? Look, I only said FFG kept them in print, not that they made sense.

The game looks like Risk with a funky-shaped map at first glance, but this couldn’t be farther from the truth. It’s actually a game of negotiation, production chains, logistics, and brutal deterministic combat. Resources are seeded throughout the board and players struggle to get what they need where they need it while fending off opponents who are a little too touchy. The only randomness is a chance of certain phases not happening in any given round. Combat, logistics, and everything vital to winning the game can be determined with a look at the board and a handshake.

Of all the Eon games I’m covering here this one probably bears the most resemblance to Dune despite coming out a few years later. It was essentially the team’s take on a shorter Diplomacy and you can tell. It’s also the most critically and commercially underrated which makes it ridiculously cheap to acquire. It demands 4 players for maximum fun, but Dune demands 6 with a longer teach so that shouldn’t be an obstacle. Giving this one a go first just makes sense if you’re looking for a game that’s more about the players around the table than the dudes on the map. Arguably THE Eon game. Yes, over Dune. More digital ink has been spilled praising Cosmic Encounter than most of Eon’s non-Dune output combined. If Hoax has Dune’s politicking and Borderlands brings the shifting alliances on a map, Cosmic shares the quality that Dune receives the most praise for: asymmetry. The most asymmetry. Scads of the stuff, to the point where you may very well never play the same game twice.

FFG’s edition of Cosmic Encounter is a triumph. 50 aliens in the base box is an embarrassment of riches to the point where the heaps of expansions seem gluttonous. The rules and win condition are approachable - establish 5 colonies on other people’s planets via encounters- but the route to that win condition and the cardplay give it depth and the aforementioned infinite replayability. The standard Eon negotiation and wonkiness is dialed up to 11 and it’s glorious.

Where Cosmic Encounter and Dune’s asymmetry differs is a matter of degrees. Dune has the same factions each session, but they’re fleshed out to compensate with intricate interactions and lots of tiny interlocked gears as it’s a significantly more complex game. CE is a simple framework that allows scores of different powers to make sense. On the rare occasion the game breaks due to a weird combination of aliens it ends fast enough to not be a bother, and when it’s great it’s truly great. Odds are you’ve played this, but if you haven’t you owe it to yourself to do so. It’s a piece of board gaming history for a reason.

The Eon team’s body of work is significant. Dune may have the mystique of being long out of print and the appeal of the license, but it’s also by far their largest and most difficult in many senses of the word. Their other games are still brilliant pieces of design that warrant play and, if you’re a huge nerd, study. They’re also easier to get to the table. Dune is many people’s favorite game of all time, and probably with good reason. I look forward to trying it. But while you’re grabbing your freshly-shrinked copy and trying to coordinate 5 other like-minded folks for a rules-y game of inconsistent length, maybe pick up one of these other ones to go with it. I have a feeling you’ll enjoy them too.

Shellhead replied the topic: #301414 05 Sep 2019 11:39
Eon also published Quirks back around 1980 or so. I played a few times back then, and never again since the game has been long out of print and I moved away from the friend who owned the game. IIRC, players get cards that visually represent the front, middle, or back end of a creature, along with associated traits that help that creature thrive in certain environments. Players play cards to assemble unique creatures, and get to gradually swap out cards each turn as the environment randomly changes over time. I think that there was some competition within niches, like predator and herbivore, and the winner was whoever had the most successful species by the end of the game.

Vysetron replied the topic: #301419 05 Sep 2019 12:05
Yeah, I didn't touch Quirks or Runes as they seemed pretty far removed from Dune-ness. I also skipped Darkover because I know nothing about it beyond looking it over. Never had a chance to play it. Seems neat?

san il defanso replied the topic: #301472 05 Sep 2019 23:27
I had the FFG iteration of Borderlands for ages, and I never could find a way to get it played. It didn't make the trip with me overseas, hopefully the guys I unloaded it on found a way to get it to the table.

Both Decipher and Wordsmith use the same letter-pieces system from Runes. They look like a lot of fun.
Read More...