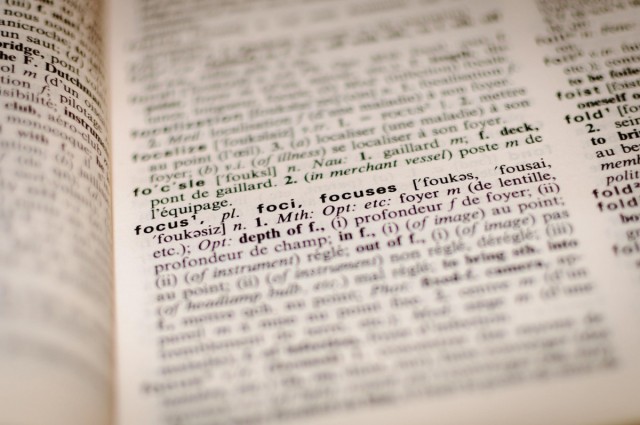 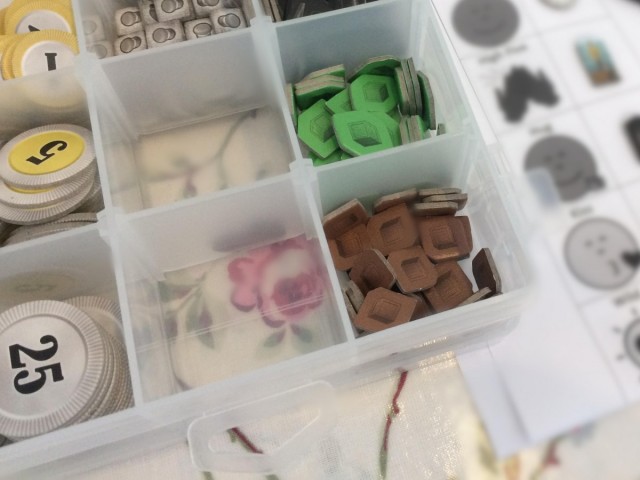 Dragonmeet 2019 - Wot The Giant Brain did 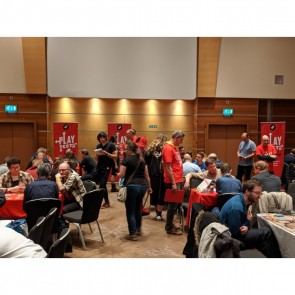 Dragonmeet was one of my very first conventions. A small RPG focused con when I first attended many moons ago, it has now blossomed into covering boardgames, RPGs and the occasional miniature game. It’s always been fun and a great way to see friends from England. The last couple of years has seen me put my press hat firmly on head and see what I can do in seeking out the new and interesting

I hadn’t arranged to see many companies this year but one I did was Loke Battlemats. I don’t think I’ve expressed my love for these folks before so let me address that now. Loke Battlemat produce spiral bound books of dry wipe, square gridded game maps. You may have spotted their work in some of my posts on the DnD game that I ran. They are fantastic products, reasonably priced, easy to transport and look great on the table. Matt from the company was nice enough to give me an interview and also a sneak peek of the cyberpunk and fantasy city books that are coming next year. Both look great and I thoroughly recommend you check out their current range of products if you are looking for some maps for your RPG/ Skirmish games. 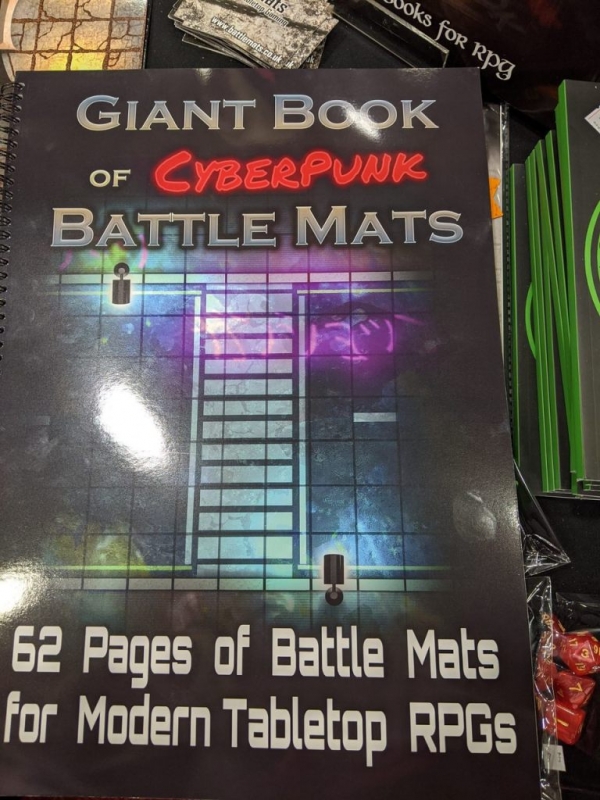 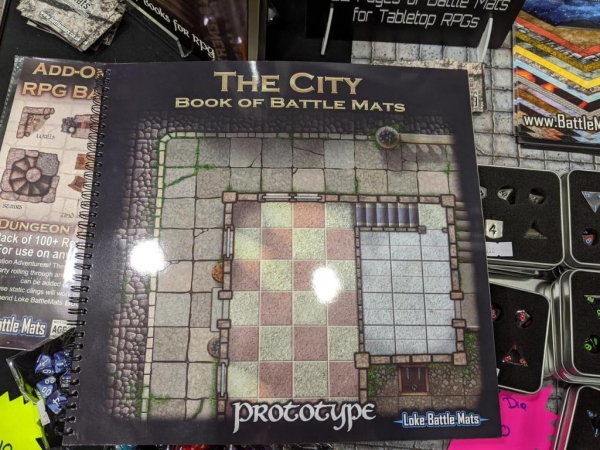 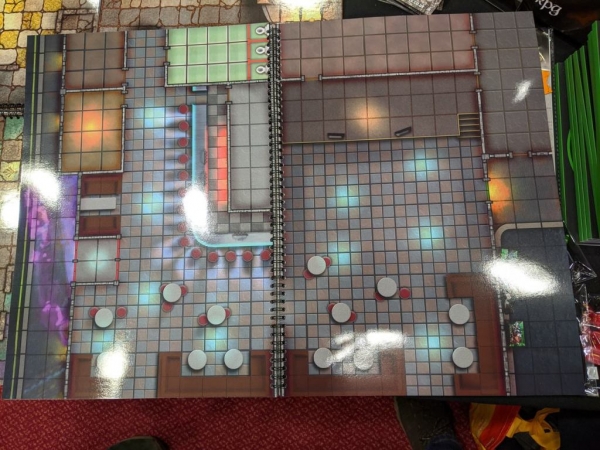 Inside the Cyberpunk book

I had a whip round the other stalls, said hello to Ally from Triple Ace Games and also Mike Barnes from Who Dares Rolls, who I regret not seeing again later. Off I went once more wandering the trade halls, demo stands and the playtest zone. The latter especially seemed to be going great guns from early doors and it is great to see their work pay off so well at the cons they attend.

My first stop off in the demo area was Ruined Sky Games who had put their hand up on twitter when I said I would be attending and who fancied an interview. They were showing off their space mining game, Circulari. Players are deploying robots to shift the hunks of rock round a black hole, mine them for ore and energy and work towards getting points in anyway they can. They had a plus prototype on show and a real sharp demo worked out that gave me a really good impression of the game in a short space of time. Excellent work chaps. 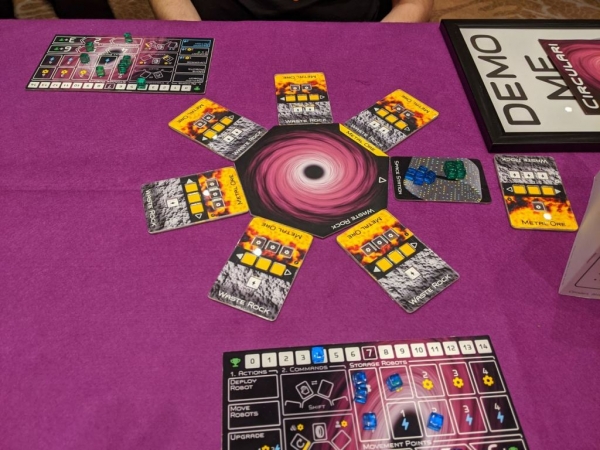 By the time I finished wandering and getting a demo of Circulari it was time for some lunch (I’d turned up a little later than intended). We met up with Baz & Gaz from The Smart Party for a cheeky Nandos (why is it always cheeky?). A bit of an interview with those chaps on the way back about the Seminar they had done on being a better player and Baz’s new book "The King Of Dungeons" and I was off back into the throng.

One man who was on my list was a personal gaming hero of mine Ian Livingstone, co-founder of Game Workshop, co-author of the Fighting Fantasy (FF) books and is pretty much responsible for getting me into gaming and where I find myself now. He does have a lot to answer for. He was excellent to speak to and I picked up his recent book on the history of board games alongside chatting to him about his return to the FF series, his work in digital games and the recent book release Assassins of Allansia.

Heading back into the demo areas I found Hercules Game Studios who were sharing a stand with Crooked Tower. The latter publisher has just released Possessed to backers and was a game I had tried at Dragonmeet 2018. The final product looks lovely though the game didn’t really grab me when I had a demo of it last year. 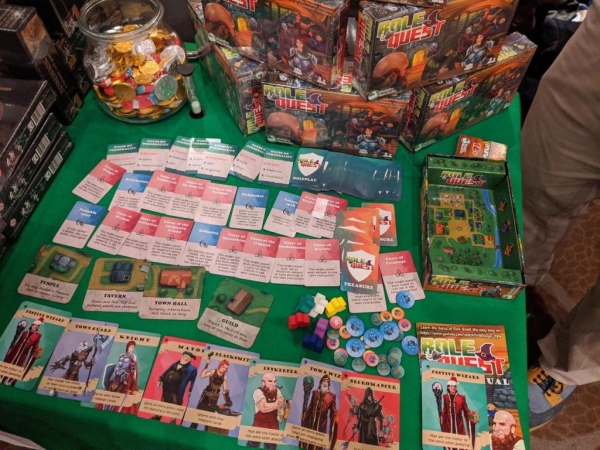 Hercules Game Studios are similarly new to the scene and had just put out their game Role Quest to backers. This is a small box game featuring 1 minute role-playing exchanges as heroes walk around town visiting various buildings. As you chat you are meant to evoke various hidden personality types and the other players get points for guessing what those quirks are. I didn’t grab a demo of this one but I did have a nice chat with one of the chaps behind the game.

Heading back into the Bring & Buy area I saw demos of Magnate: The First City going great guns, I had dropped my preview copy off with James earlier in the day. It was another game that caught my eye: Overstocked from Play for Keeps, another new publisher ramping up to a Kickstarter in 2020. 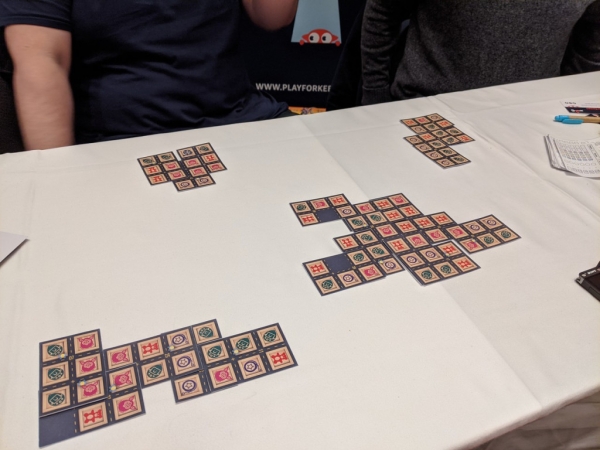 Overstocked is a rather charming tile/card placement game

Tasked with managing a warehouse this game involves you arranging goods to form large contiguous groups. Each of your groups is multiplied by the size of the matching groups in a warehouse in the middle of the table that everyone contributes to. The largest group in the middle does not score anything as it is overstocked (boom tish). I really enjoyed this game. Quick playing with just enough decisions to make and a great theme with a bit of 90s nostalgia thrown in for good measure; you are stacking boxes of furbies, yo-yos, tamagotchi etc.

The chaps from Play for Keeps were amenable to an interview and we chatted about their plans for release, other games they are developing and the history of Overstocked. One to watch for next year.

One final pass through the main trade hall saw me alighting on Osprey Games stall. I’ve had my eye on Undaunted for a while and finally picked up a copy, despite my reservations about the World War II theme. My friend Rich picked up Helter Skelter aka Wildlands with a Judge Dredd theme. We played both of these over the next few days and found them to be excellent games.

My very last stop before the bar was chatting to Grant Howitt from the UK Indie RPG league. He was good enough to show me a preview copy of Electric Bastionland from designer Chris McDowall. This is a really interesting looking RPG with lots of random generation tables which are precisely the kind of thing I love. The whole team are putting out some of the most interesting games in the UK scene just now and I urge you to check them out.

I thoroughly enjoyed my time at Dragonmeet this year and it was good to see more of the RPG scene than I might usually pay attention to. In 2018 it felt like the show had split 50/50 between boardgame and RPGs but 2019 felt like it was getting back to its roots with more like a 30/70 split towards RPGs. There were loads of folks selling DnD adjacent products which is no surprise considering the rise of the game in the last few years.

If you are a boardgamer then Dragonmeet might not be entirely up your street but if you have more eclectic tastes, or are just interested in RPGs, then this is a great con with a lot going on and plenty to see and do.