Are "Dudes on a Map" Games Dying? 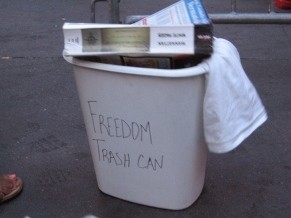 F:AT LOOKS BACK.
This article was original published May 15, 2009 with the title Topical Trash.

Ken B.'s internet conection was blown out by the storms, so let's look back and enjoy this classic in which he coined the term DoaM

"Dudes on a Map." That phrase means something to ATers. The question left is, "is that style of game dying? Is there anything else left to offer?"

"Dudes on a map" is one of the staple AT game types. When I say that phrase, it should instantly bring to mind games like Shogun/Samurai Swords, Axis and Allies, or more recently games like Dust and Age of Conan. Games with an area-level map--often global, sometimes more specific--on which you place your dudes in an area and try to use them to take important areas from someone else.

It's the style of game, that visual tic that will get casual gamers to ask, "Is this game like Risk?" And indeed, Risk is the quintessential "Dudes on a Map" game. Piles of plastic dudes doing battle with other plastic dudes, taking areas from one another in an attempt to wipe each other off the map. It's this similarity in appearance that will get games tagged subconciously with the Ameritrash label...games as diverse as Mare Nostrum and even Imperial get labeled "AT-esque" solely based on our minds link with that 'style' of game.

The question is, though...is that genre of games dying? More importantly, is there anything left for that style of game to offer?

It's hard to argue that "Dudes on a Map" may have peaked in the 80s with the awesome Gamemaster games. Those titles did so much right that sometimes it feels like later designs are treading the same ground. My dudes want your stuff, so we throw our dice and see what dies. And at one time, there was no other game style that would get me wanting to try something immediately than seeing plastic dudes splayed out over the map, ready to do battle.

Really, a question is why so few of them seem capable of innovation. Most of the time if you take a Dudes on a Map game out of the box, I'll have expectations--and those expectations are going to more often than not be met, like a checklist. Specialized dudes, take your territory, play some cards, chuck some dice at each other. And that's often just what you'll get...in fact, that's ALL that you'll get.

That's not to say there aren't flashes of innovation, it just seems much more rare, like the genre is moving in slow motion. Bits and pieces get innovative touches from game to game. Game of Thrones introduced a Diplomacy-esque order system with deterministic combat through cardplay. War of the Ring took the "limitation of command" in the form of action dice, which sometimes just don't cooperate. Nexus Ops didn't innovate exactly, but pared everything down into a pure essence that plays in 90 minutes.

Nexus Ops also solved one of the age-old problems of these games--the tendency to reward turtling and defense. Risk has Australia, and the defender even wins ties. That philosophy seems to have trickled down over the years, and lots of these games suffer from "he who stays out of the fray, wins."

Sometimes innovation hurts perception of a game, though. "Dudes on a Map" has a series of expectations, and when a game deviates then it can generate misunderstanding and frustration. Twilight Imperium 3rd Edition was designed so that you could win without ever firing a shot--and yet this somehow became a criticism of the game.

I wonder if my opinion of the genre isn't skewed by my overexposure to them. Right now I'm looking at my game shelf and I can easily identify 15 "Dudes on a Map" games. I own four different versions of Risk, fer cryin' out loud. I call this the "Ebert Syndrome", where you're exposed to so much product that you start to be too hard to please, too hard to impress--like a game would have to make me a cup of coffee and a sandwich before I said, "Hey, that game's not too bad." I don't want to be that jaded critic, I hate those guys.

But it's definitely possible that's what's going on. Seeing a "Dudes on a Map" game these days almost elicits a yawn from me, like I'm just assuming there's a lazy design in there. It's harder to get excited for them like I once did. Part of that is certainly overexposure, but there's definitely a lack of innovation going on. Like Dust failed to even raise an eyebrow with me, except originally when I thought it was an original property; I soon found out it was Just Another Licensed Dudes on a Map Game.

Is this style of game too limited by its own elements? Its own expectations? Can a *non-licensed* "Dudes on a Map" game even get a foothold in the door these days, needing that extra punch to even be noticed? Am I just a jaded, crusty ol' critic? What do you guys think?

This first of entries for "Topical Trash" is dedicated to Diane Close. This is something I've been meaning to do for awhile, but have been extremely lazy about it. No longer.

(This does NOT mean I'm equating Diane with Trash. She's our resident "Cool Chick." And hell, calling someone Trash--that's a compliment in these parts anyway.)