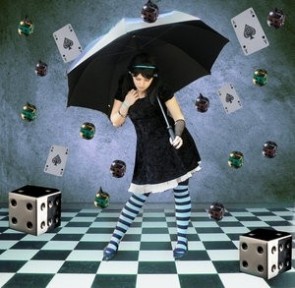 What are the fundamental functional differences between boardgames and card games?  I’m not sure how important this question is from a game player’s point of view but it’s certainly important for game designers (even for video game designers).  The obvious physical format is important, but now that we can convert physical non-electronic games to electronic formats the lines are less clear. More importantly, each type of game emphasizes or encourages different kinds of challenges and gameplay, regardless of the physical format.

It’s also possible to take a game that originated in one format and make something like it in the other format.  I have done this with a dungeon delving game and even made a prototype version of Britannia using cards.  I believe this happens a fair bit in the Eurostyle games.  For example, San Juan is a card game based on Puerto Rico, and so is Race for the Galaxy.  But as we’ll see many Eurostyle boardgames do not use a board in the traditional way, for maneuver and location, instead they use the board to keep track of other information.  So what is the traditional way?

The most important difference between the two kinds of games is that card games are inherently games of hidden information and boardgames are inherently games of maneuver and location.   (When I say location I mean the location of actual pieces, not a representation of some virtual commodity such as the amount of money you have or the amount of victory points.  “Location” implies maneuver or placement.)

There are exceptions.  The traditional card game Bridge is unusual insofar as, after bidding, one player’s cards are revealed (the dummy).  And this tells the Dummy’s partner what cards his opponents have, though not which individual opponent has which cards.  Texas Hold ‘em is another card game where some of the information is revealed to everyone and only two cards per player are hidden from the other players.  But Five Card Draw poker hides all the cards, sometimes even after the game ends.

Hobby card games such as Bang!, Atlantic Storm, Brawling Battleships, and Lost Cities have hands of cards but some cards are placed on the table so that they can affect everyone in the game.

Boardgames
Most really old traditional board games are games location and maneuver-mancala, chess, checkers, Nine Men’s Morris, Parcheesi, backgammon, Go, and Japanese/Chinese forms of chess.  In some of these games there is only placement (and removal) of pieces, for example in Go.  In others the initial placement is predetermined and the game is all about maneuver, as in chess or checkers.  There are few games that include both placement and maneuver.

Notice that few of these old games use dice.  Dice provide uncertainty within a range of possibilities, a kind of hidden information but not the same kind as we get with cards.  Dice were the typical way to provide uncertainty before games could include cards.  Handmade playing cards first entered Europe in the late 14th century. The technology to make uniform decks of cards did not exist until the invention of printing, so the really old traditional games do not use cards.

Card games are probably more popular than boardgames for a variety of reasons.  First they’re less expensive, second they tend to take less time to play, third they can be more colorful than boardgames because of the artwork on each card.  Most important perhaps, the hidden information tends to make it harder for a planner-style player to dominate play, introducing elements of uncertainty and chance that make it possible for a less calculating player, or perhaps I should say one who is less a classical/planner player, to win a minority of the time.  Another way to put this is that casual players have a better chance of winning in hidden information games than in games of perfect information, most traditional boardgames being perfect information games.

Hybrids
It is possible to use cards to create the equivalent of a board, but then we have something that is functionally a boardgame not a card game.  I have done this in two prototypes were my objective was to make a game with only cards as components (to simplify production), yet I wanted to have maneuver and location.  Many games that now use cardboard tiles to create a board on the table would once have used cards for the same purpose.  While we might think of these as boardgames, such as Settlers of Catan and Betrayal at House on the Hill, they could have been produced with cards, and in the latter game the tiles are used to hide information in the same way that cards hide information before they are drawn from a deck.  Tikal and Carcassonne do the same kind of thing.  Settlers uses the board for placement, Betrayal uses it for maneuver, Carcassonne uses the “board” as the unit of placement rather than placing pieces on a board.

In a boardgame location and maneuver tend to dominate play.  Chess, checkers, backgammon, even Parcheesi, are games of maneuver.  Hex and counter wargames are typically games of maneuver, though we also have combat and chance elements in dice rolling.  Monopoly is not a game of maneuver because you have no control over where you go, but there is the element of location.  In Tic-Tac-Toe (Noughts and Crosses) you don’t actually move pieces once you put them on the board but where you put them is vitally important.

Race games (getting to a finish line before anyone else) are generally about maneuver and location, whereas speed contests (something is timed individually and best time wins) are not.

You can introduce an element of hidden information into boardgames, of course.  This is not new. More than a century ago we had a variation of chess called Kriegspiel where each player could only see his own pieces and a referee told a player when an opposing piece took his piece or checked his King.  While the phrase “block games” tends to put one in mind of the wargames published by Columbia Games, the technique goes back at least to the game L’Attaque patented in 1909, more familiar in the copycat game Stratego.  The Columbia games add dice and more complex boards to the equation but the key element is hiding some of the information that normally is exposed everyone in a boardgame.

Flat (cardboard/chipboard) pieces that are placed face down introduce another element of hidden information.

In contrast to typical boardgames, many Eurostyle games include boards that are not used for maneuver or even for location.  The board is used to help keep track of other kinds of information.  Player layouts for tracking amounts of virtual commodities are small boards.  But even in games with larger boards, the board may not represent location or present opportunities for maneuver.  Kingsburg is an example.

Actual warfare is a combination of hidden information and maneuver, among other things.  Given the prominence of maneuver in warfare, it’s not surprising that board wargames are much more common than card wargames.

Auction games aren’t really either type, though they lean toward hidden information more than location and maneuver.  You can argue that resource management comes down to set collection, just as auction games do.

Further afield we have games of deduction (which is largely about hidden information, though Clue/Cluedo includes location and maneuver as well).  It might be nice if we could pigeonhole all games into a very few slots like “hidden information”, “resource management”, “location and maneuver”, and “auctions”.  But I don’t think this is practical, at any rate I see too many exceptions to almost any set of categories at this point.

Collectible card games are largely about hidden information, though some have an element of location (cards face up on the table) just as some traditional card games do.

Tabletop RPGs involve both maneuver and hidden information in abundance.  They are closer to video games than to either board or cardgames.

Competition in board and card games
It's fashionable in the hobby tabletop game industry to produce "Eurostyle" games that reduce direct conflict between players to a minimum.  They are often more like puzzles that have been turned into speed contests, not games, and "multi-player solitaire" is a common description of many tabletop games.  Wargames, on the other hand, emphasize competition and confrontation, of course.

Mark Johnson suggested in a recent "Ludology" podcast that card games are less competitive than boardgames.  Is that so, and why?  I think it is.  Because boardgames are naturally about maneuver and location, they tend to involve more direct interaction than cards, where you can play cards onto the table and do very little to affect other players.  Traditional boardgames tend to involve tearing down the opposition, not building up, you start with some pieces and lose them as the game goes along.  (Even in Go, where you add pieces to the board, you're taking your opponent's pieces as well.  Go is not much like other traditional boardgames, in any case.)   Traditional card games usually involve building up sets or tricks.  You start with nothing but a hand of cards and gradually build up your position.

In more-than-two-sided boardgames the system of maneuver and location often means that you are not able to attack/hinder all the opponents, because some are too far away.  In more-than-two-sided card games you do have a player on your right and on your left, and the rules may allow you to attack only those players, or "anyone".

Video Games
We can ask what the nature of video games is in comparison to card and boardgames.  First, it’s relatively easy to make a computer game where most of the information is hidden from the player or players, a card game characteristic.  When you program a video game you have to deliberately decide to show information to the player, or he’ll know nothing.

That information can be shown on the equivalent of a board, though the board can be rather more complex than a physical board.  Pac-Man is a quintessential game of maneuver, as is Space Invaders.  Civilization uses a board, a square grid through Civilization IV and a hex grid in Civilization V (version V generally exhibits a greater influence from board wargames).

Many “strategy” video games appear to be games of maneuver, for example Starcraft and Civilization. Hidden information is also quite dominant.  But there are so many layers of production and technology involved that these games are more about resource management than either maneuver or hidden information.  When cut down to a simple version as a social network game, Civilization becomes almost entirely a resource management game.

A video platformer is a game of maneuver.  An old-style text adventure game is a game of hidden information.  Yes there is more to both, especially to the old-style adventures, but these are the major delineations.

What video games are particularly good at is combining the two major elements of board and card games together as in shooters and real-time or turn-based strategy games.

Dr. Lew Pulsipher has designed half a dozen commercially published boardgames.  Britannia is described in an "Armchair General" review as "one of the great titles in the world of games."  His book "Game Design: How to Create Video and Tabletop Games, Start to Finish" is forthcoming this spring or summer from McFarland Publishers.  http://www.mcfarlandpub.com/book-2.php?id=978-0-7864-6952-9

Tweet
Discuss this article
Log in to comment
Posts in discussion: The Fundamental Differences between Board and Card Games (and How Video Games Tend to Combine Both Functions)