Risk: The Greatest Ameritrash Game Ever Made 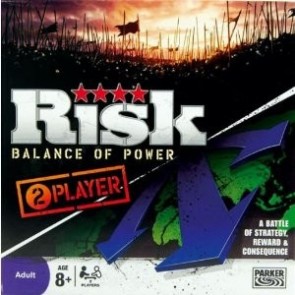 Game Name
Risk
Publisher
Hasbro
There Will Be Games

Risk – yes, the one with all the dice, the world domination, and Australia – is probably the greatest Ameritrash games ever made. Or rather, I think that the (rather) new version Risk: Balance of Power is, but that is patly because the original game is much, much better than its reputation.

This is not an article about which games you should bring with you to a deserted island. Mostly because bringing games to a deserted island is just plain stupid – most deserted islands don't even have tables large enough to field a board game. So you'd have to build one first, and good luck doing that with a board game. However, if you had to pick one you most likely wouldn't go for one of the many versions of Risk. But you really should since it's probably the best ameritrash game ever made.

I'm not a huge Risk fanboy. And even though I love Risk 2210 passionately – probably because it was the first big game I bought after getting back into board games some ten or 12 years ago – I don't play Risk that much. But a couple of days ago I bought and tried Risk: Balance of Power and was blown away. And when I thought about what I liked about that particular Risk version, that's when it dawned on me just how perfect the basics of Risk are. 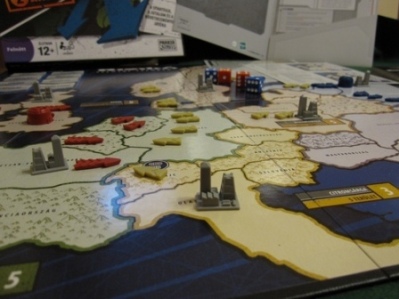 The Importance of Having a Map
First. Balance of Power is a two player version of Risk made by Rob Daviau who is behind all the cool new Risk versions (no, not LotR Risk, which is also in no way cool). Basically the new stuff is that you (like in the revised edition) vie for objectives (you have to accomplish three and hold your capital to win), that some territories have cities which counts for an extra territory when reinforcing, that your slain armies can be used in your next turn to buy one shot abilities, and then the map is totally different. Instead of fighting for world dominance, Balance of Power is all about Europe. And instead of just having different lands, the board also has terrain. Some countries are harder to attack than others because of swamps or mountains which are drawn onto the board. And so are some of the objectives you have to capture such as the Swiss bank and the Harbor in Denmark (which is also for some reason mountainous terrain – nothing could be further from the truth, I can tell you. Though we do have a nasty hillish stretch of road on the way to my kid's kindergarten which can be a bitch when riding there by bike early in the morning.)

The game has a couple of other cool features – like for instance how killing of the neutral troops that populate the board won't give you a card, only taking stuff from your opponent will – but in many ways the new board is the single best thing about the game. The way that some territories hinder your movement (by being harder to take) and the fact that you can see the important objectives mean that you don't just fight a war. You fight a war over something. Instead of just being an abstract conflict, it's suddenly a war about certain areas, important resources, and so on. Also it plays in an actual hour which is a quite impressive for a DoaM game.

The Part Where Aristotle gets a mention
Now, brevity is not something normally attributed to Risk. Classic games of Risk tend to go on, and on, and on. In fact I honestly can't remember having ever finished a classic game of risk. But I do remember having tons of fun. Because a huge part of the game is that it goes on for ever. More on that in a moment, but the problem is that the length hurts the overall feel of story. I've argued elsewhere that one of the brillant things about Risk 2210 is that it only lasts for five turns where five also happens to be the number of acts in a classical tragedy. Because an important part of telling a story is, as Aristotle will tell you, to tell a story of the right size. And often a game of a reasonable length will be easier to see as a whole – as a complete story – than a bloated mess will no matter how much fun you have as you go along.

Vanilla Risk is not of the right size. It's enrmous and, as far as I know, never ending unless someone flips the board. Which somebody will do eventually. But while that is not good for the overall feel of story, it's great for the metastories and/or what I call the small stories. Those never-ending games will generate lots of what the fuck moments where a lone army will manage to hold Australia turn after turn against all odds. And they'll also let you tell each other afterwards how this player backstabbed that player as he always do and so on. This is not just because I, of course, surround myself with awesome people, but because of the game. Because of the catch up mechanisms, the wild swings of the dice, the ganging up on the leader, and so on – things that ensure that the game will keep on rocking.

And the interesting thing is that while the never versions of Risk manage to create story arcs – 2210 with it's five acts, Phantom Menace with Order 66 that radically changes the board – they keep lots of what made classic Risk, well, a classic. Like when I the other day while defending with the neutrals managed to roll the exact same numbers as my wife two times in a row thus ending an important attack. That is what can make Risk both so sweet and so bitter.

It's the combat system, stupid
But all this is not why Risk is the best – no, the greatest – ameritrash game ever made. The combat system is. I know it's overly simple. I know it's more or less a matter of chucking dice. And I know that it doesn't tell you anything like for instance a combat resolution table is supposed to do. But looking closer at it there are three reasons why it's a work of art:

I'm not sure I'll ever play vanilla Risk again. The new versions are simply too good to ever go back. But I'm more and more convinced that the success of Risk 2210 and the Star Wars versions (success as in artistic merit – I don't know how well they sold) is not just because Daviau is a brilliant designer, but because the fundamental game system of Risk is rock solid. Balance of Power is a great game because of all the new stuff that has been added to Risk; because of the board and the missions that let you play out a story, because of how your dead troops will buy you options that you have to apply as fits your strategy, because of the cities that create important areas. But also because of the system that is the core of all the Risk games. A system that lets you make a ton of decisions, but where any single one will rarely cost you the game.