Writing: A Year in the Life 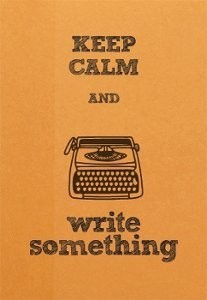 I seem to have fallen into an end-year pattern when it comes to writing: I close the year with a best-of list and open the new one with a rundown of what I’ve been playing and what I hope to play in the coming months. Dull, but comforting, like lexical porridge. This year I’m going to open the writing with something a little different, a little more personal and talk not just about games but about writing.

I think I learned more about games writing this year than any of the other five that I’ve been doing it for. It’s mostly the fault of Bill Abner and Michael Barnes for giving me a slot on NHS. That meant I had the chance to write about videogames, and to do that I felt I had to read what others were writing on the subject, and play them more, which lead into a beautifully vicious circle of reinforcement.

And in ploughing through the dark depths of games journalism, I came to realise that its improved almost immeasurably since I was last a regular on the circuit, seven or eight years ago. There are people out there generating quite stunning pieces with astonishing regularity. Jason Killingsworth on Edge with his sublime voyages through the emotions and artistry of gaming. Patrick Garratt on VG247 with his endlessly inventive approaches to the construction of articles, sentences, phrases. They’re two of my favourites.

A third was Robert Florence with his columns for Eurogamer. But they ended suddenly, sadly and needlessly after he gently criticised the behaviour of some of his contemporaries in accepting corporate freebies. Ridiculously, this soft needling resulted in threats of libel cases and the closure of the column, although rather more positively it prompted an overdue bout of soul-searching in the UK games press.

It’s astonishing that this very year, when Jesse Dean decided to send a questionnaire round the game reviewing community, virtually no-one thought of themselves as a critic. If the function of people who review games is not to criticise them in a meaningful and constructive fashion for the benefit of their readers, then what is it? To provide tediously detailed descriptions of rules and components, punctuated with big glossy photos seems to be the disappointing answer.

Video games journalists took the accusation of corruption seriously for two key reasons: partly because of professional pride and partly because of pressure from their readers. Neither exists in board gaming where almost all writers are amateurs and the hardcore hobby audience seems not only content with the parlous state of reviewing but sometimes even to celebrate it. There’s little hope of widespread change. And in such a niche market, perhaps there’s little need.

But it matters to me. It’s always mattered because I love board games, and because I’ve long been dissatisfied with the standard component and rules breakdowns with a smattering of bland opinion that pass as board game reviews. I love writing, and I love reading well-constructed, expressive, meaningful writing that’s beautiful to follow, imparts valuable information and encourages reflection on the part of the reader.

Until I dove into the wider world of video game writing, I drew most of my inspiration from a combination of the many novels I’ve read and the few pieces of board game writing that I admired. This, it seems now, was a mistake. Novels are not just extended long-form journalism. The best board game writing is still comparatively weak. The best journalism, unlike both those formats, is deeply personal, exquisitely subtle and uses a variety of authorial tricks like clever metaphor to cram extended meaning into concise passages.

Upon realising this, good journalism became addictive. I wanted to inhale it, consume it, reread it, bask in its glories, deconstruct it, understand it, learn its lessons and its secrets and apply them to my own writing. To board game writing. And at some unspecified point during this year there was a change in the way I approached my articles. It was the point where my growing desire to write well oustripped my already effervescent desire to play games. The writing, quite suddenly, became more important than the games.

That might sound bizarre, but it’s proved immensely liberating to me personally. I no longer felt in thrall to the wider board gaming “community” but my own person, stating my own opinions in a way I felt very comfortable with. And I became much happier with what I was writing, and began to believe that there was a gradual improvement in the quality of my pieces after a long plateau following the jump-up I’d gained from ditching restrictive, self-imposed review templates.

You’re the guys that read it, and you may disagree. It’s impossible to be an impartial judge of your own work. Even if my writing has improved, I’ve still got a long way to go to apply all the lessons I’ve learned from quality journalism. It may be that I never will, that perhaps whatever talent I have for forging words into sentences on the white-hot surface of the page can’t ever match the more prosaic, academic appreciation of what good writing should be like. But that doesn’t undermine the existence of that heightened awareness.

And so when I return to reading what passes for the bulk of board game journalism with my newly-opened eyes, I am even more depressed and disappointed than I used to be.
Make no mistake: most of it is objectively terrible. What Michael labelled the “worst review ever” probably wasn’t entirely deserving of that epithet but it was certainly very poor. And yet people beyond the author chose to step up and defend it. I found that incredible, unbelievable. And very sobering.

I found it so shocking in part because I’ve got used to getting my board game writing from one source, and one source only: here. For reasons I don’t entirely understand F:AT seems to have gone beyond, way beyond its original remit and become a mecca for people like me who aren’t satisfied with the feeble baseline set by other sites and blogs, and quality content follows in their wake. I may not be an impartial judge of my own writing, but I am of Michael's, Nate’s, Ken’s and that of the numerous less frequent contributors who honor us with their pieces. And while it might only rarely match the height of professional journalism (that’s fine, we’re all amateurs here), it stands head and shoulders above its contemporaries. Thank you, all of you, from the bottom of my heart for making this site the perceptive, mature place it’s come to be. I don’t want to imagine a board gaming world without it.