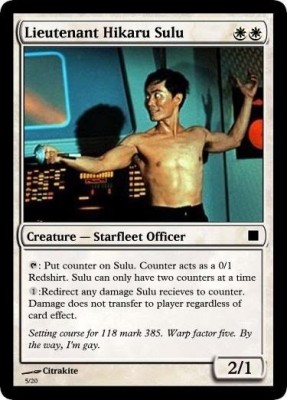 Until this year, I think everyone had played Magic: the Gathering except for me. I moved overseas literally months before it debuted in 1993, and it totally passed me by. I never felt like it was a big gap in my life, but as I got further into the hobby it started to feel like the proverbial elephant in the room, a bizarre oversight considering my obsessive love for Magic’s most obvious ancestor, Cosmic Encounter. My taste in games has grown to embrace games with built-in imbalances and bizarre card interactions.

Of course, a lot of people could give you some very good reasons to NOT get into Magic. The first one that anyone would point out is the financial output. Never forget that it’s a game made of trading cards. You don’t get the good cards without paying for them, unless you luck out and get one in a booster pack. I know many who speak of their time playing Magic like an addict remembering their crack-head days, remembering how much money they whizzed away on booster boxes and second-hand cards. The other big hurdle that’s always stood in my way is the sheer scope of the game, because it’s a hobby unto itself. The number of cards is insane, and the rules are appropriately complex. Now as we’ll get to in a moment, it’s a deceptive complexity. Still, it’s there. Not only that, but there are about ninety hojillion ways to play the game, and starting means you’ll have to be the new guy for a while. That’s never fun.

But after some guidance from more experienced players, I found myself with an opportunity to start what we are calling a “limited constructed” league. That means that we start with six boosters, build a deck on the spot, and play a round robin of best-out-of-three games with each other. Then we keep the cards we got as our pool, meeting once a month and adding one more booster to what we already have. There’s no trading between players, so everyone has the same number of cards, but they’re all different. It keeps both concerns I mentioned above in check, allowing a minimum of financial outlay and a tight pool of cards that shouldn’t be too overwhelming.

So we sat down this last week for our first league night, built our decks, and ran them against each other. It’s very strange to come to a game literally twenty years after everyone else. It’s not exactly the same culture as board gaming, though there can be a lot of overlap. It has its own language that I followed, but didn’t think I could use for fear of sounding like a poseur. Since such a tournament structure is built up, there are far more conventions that are generally observed, though we played pretty loosey-goosey with them. But the most surprising thing was that I actually didn’t feel like I was drowning. Once I got my feet, I had a pretty terrific time.

This isn’t my first experience with the CCG model, not exactly. As I’ve written I’ve had some experience with Fantasy Flight’s highly successful “living card game” model. I’m a big fan of the Star Wars LCG especially. The “living” part of the game means that there are new cards released, but they aren’t in random packs. They really function more as expansions than anything else. Those who play them some serious card games probably like that more, but I confess that for me it’s overwhelming. The cards are released more often than I can play, and building decks is a challenging experience when you just have everything at your fingers. I think I prefer the random model more, at least for how I play. Since I’m such a fan of Cosmic Encounter, I like imbalance built into a game. And in some ways, it feels a little more like what the game was intended to be. It allows your collection to be unlike anyone else’s, and it allows the game to roll with the randomness instead of struggling against it.

There’s a lot of that “new player” feeling for me. While I mostly understand the rules, the nuances of how to play cards well and when to throw down instants (on the other guy’s turn, dingus) is still not second nature to me. And of course, deck-building eludes me at this point. I’m not a detail-oriented guy by nature, so I’m not naturally given to inspecting every card in my deck, especially when there’s a time limit like we had. I’m generally satisfied to go with my first impulse and call it a day, which will be a good way to lose. I’m not much good at evaluating the value and efficiency of a card yet, so that doesn’t make deck-building any easier. But I’ll get better at both with experience and the gentle guidance of my friends, who have been nothing but supportive and helpful with strategy and deck-building tips.

What do I think of the game itself? I really liked it a lot. The complexity from the card interactions is a factor, but Magic is much faster than almost every game it spawned. The nature of the mana system means that there are far fewer cards to digest in any given hand. A hand of seven cards is much easier to deal with when half of them are basic lands. I loved seeing the cards work together in unexpected ways, and I’m already thinking of how I can better tune what I have. After 8-9 games in one evening, there were a few cards to which I had grown a little attached, and that’s the kind of personal investment that makes games good.

Magic has been compared to Cosmic Encounter so many times (even by Richard Garfield, Magic’s creator) that I couldn’t help but use that as my frame of reference. There’s a lot in common, except Magic takes the idea of imbalance to its logical extreme. Not only are we playing with different player powers, we’re playing with totally different groups of cards. That idea was a revolutionary in 1993, and it struck me while I was playing. It’s not quite as loony as Cosmic Encounter, which actively encourages silliness. That’s more my type of game, but in my context right now, this league can end up being one of my gaming highlights every month.

That casual environment was the best part of our group. We just spent the time shooting the breeze between games, discussing strategies and decks, and generally socializing. It fought against the cliche of the anti-social nerd who cares more about winning then the time he spends with other people. I’ve always been blessed with lots of good friends who will play games with me, and Magic provided a way for me to get to know some of them just a little better. I look forward to the months ahead not just as we get to play more, but as it allows us to hang out more often. A game that helped me connect with people? Imagine that.