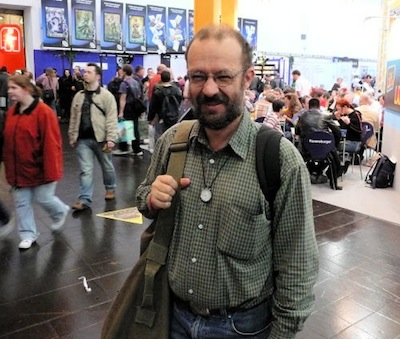 One of my strongest influences in board gaming came from noted French designer Bruno Faidutti. Aside from his many designs over the past 15 years, at one point he maintained one of best board gaming sites on the internet, his Ideal Game Library. This was a valuable resource to me as a new gamer, because it showed me two very important things: that gaming had a rich and eclectic history, and that I did not need to like every popular game. Of course, Bruno is best known for his games, which are numerous and varied. I’ve gone all over the places on his games. Mission Red Planet is an underrated game that synthesizes bluff and area control to great effect. A couple, like Red November and Mystery of the Abbey, are compelling misses for me. At least one or two others, like Letters of Marque, didn’t work for me at all. But his contribution to gaming can be best summed up in what I call his Triple Play, a run of three little games he released between 2000 and 2001. These games, Dragon’s Gold, Castle, and Citadels, are three designs that continually impress me with their simplicity and their terrific interaction. They’re all pretty different from each other mechanically, and my mental grouping of them is mostly arbitrary. But they have always felt of a piece to me, and I think they’re exactly what light games should be.

Dragon’s Gold was actually the last one released of the three. It’s a little negotiation game with an interesting semi-cooperative element. Each player controls a group of adventurers who are sent one by one to defeat dragons together. Each dragon has a treasure that is only partially known before the adventurers defeat them. Those adventurers come from all of the players, so there has to be a little uneasy cooperation to defeat anything. But after victory, the most important part is to divide up the treasure among those who participated. What follows is one of my favorite takes on negotiation. Players aren’t allowed to make promises of future deals. Instead they must simply divide up what’s there. The trick is that failure to divvy it up successfully means no one gets anything at all. All of the different jewels and coins score in different ways, so what a player has collected will drastically affect how they negotiate in future. There’s also a deck of magical objects that throw some more ambiguity into the game. The negotiation especially reminds me of the alliance phase in Cosmic Encounter, though that game places its parameters a little more organically.

Castle is an entirely different animal. In this game there is a little square set of castle walls, and the players are dealt cards that correspond to different characters who can populate the castle. Each character has their own ability and effect on the game. Some will remove other characters. Some will cause them to switch places. They are all associated with one of four locations on the board. There are over fifty different characters, most of whom are unique. As a result each game of Castle can change quickly, especially with more players. It’s a little like a simple CCG with a spacial element. Castle is unfortunately out of print, having been mothballed with Descartes closed shop several years ago. This is also the only one of these games that was co-designed with someone, namely Mare Nostrum designer Serge Laget.

Of course, most gamers are familiar with Citadels. Aside from being the most well-known of these games, it’s also easily Faidutti’s most famous game. There are eight characters who are chosen in a simple draft, and who dictate the turn order for the round. Of course, each one has its own power that can disrupt the game. The players are each trying to build a city made up of district cards. The character selection process requires a lot of double-guessing and misdirection, since a couple of roles actively attack the other players. It’s not really about selecting the role that will help you the most, but about thinking how your opponents will select and acting accordingly. Of course, they’re doing the same thing. Citadels was an interesting case of parallel design with Castle. They both originated from the same

So what do these three games even have in common? Mechanically they all share a love of special card powers and their interaction. Faidutti has declared Cosmic Encounter and Magic to be among his favorite games, and it’s not hard to see that influence here. The magical objects in Dragon’s Gold are basically a flare deck, and the “Invisible Hand” object is a direct quote from what modern Cosmic players will recognize as the Classic Filch flare (the only kind worth using). Castle and Citadels both use a variation on character powers, where each player will go through several of them in a game. You could make a case that this is one of his defining characteristics as a designer. He’s known as someone who loves chaotic crazy games, and nothing creates chaos quite like wacky card interactions.

But the interaction that really binds these games together in my mind is what happens between the players. All three are simple games, both in design and in components. But I’m genuinely impressed how well they embrace the human element. Dragon’s Gold and Citadels both embrace a straightforward metagame that manages to avoid being imposing to new players. Castle relies more on straight cardplay, but it’s cardplay where almost every move affects the other players directly. Some designers apparently include interaction as a grudging necessity, but Faidutti has always been comfortable with it. These designs utilize the players to shape what’s happening in a way that is natural and unassuming, which is often the most impressive way.

It’s a shame that all three games seem to have fallen out of favor with the board gaming community. Dragon’s Gold just got reprinted in 2011, after a long time on the secondary market. Citadels remains an evergreen title, but I sense this is more with casual gamers than dedicated hobbyists. Of course Castle isn’t available at all anymore, and I’m not aware of any plans to reprint it. All three games feel like throwbacks anyway, the kinds of games that just aren’t in favor anymore. Maybe they’re a little too chaotic and lighthearted for current tastes, or maybe games of this weight are now generally designed with more ostentatious productions.

As I said earlier, the distinction with these games is one that is rather personal. Some players might add Fistful of Dragonstones or Draco & Co. to it, though both games are out of print and unplayed by me. But they feel linked to me, like they belong together. More than any other titles, they represent the work of Bruno Faidutti like nothing else he’s done. There might be other games that are better-regarded, but these are the ones that make him one of my favorite designers.

Nate Owens is a weekly columnist for Fortress: Ameritrash. He drinks too much coffee and likes the Star Wars prequels. You can read more of his mental illness at The Rumpus Room.
There Will Be Games