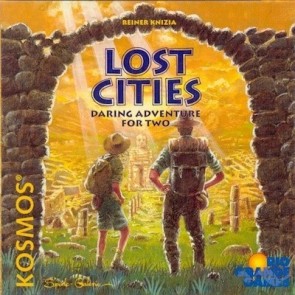 I owe Lost Cities an apology. Lost Cities is the classic two-player card game by Reiner Knizia, a perennial favorite of gamers for more than a decade now. Not me though. In fact I would say I just about hated it. Oh, I had plenty of reasons why, but the biggest one was that I just couldn’t see how the game was anything besides a complete crapshoot. You play cards that represent going on an expedition, with the idea that you need to reach a certain level on that expedition before you actually can score any points. I like risk assessment a lot, but I just didn’t see how Lost Cities allowed me to assess anything. To me it looked like you played stuff and hoped you got the right cards. Sometimes I did, sometimes I didn’t, and every time I felt like I was wasting my time.

Two things caused me to reassess  my opinion. First of all, it’s one of my wife’s favorite games. We don’t often get the chance to play anything together, so if a game has her attention I will try hard to like it. Secondly, I have gone through a general reassessment of the games of Reiner Knizia. It’s been fun to rediscover a designer who is widely regarded as one of the most important and influential ones out there. When there’s one “classic” that I couldn’t seem to connect with, I figured the problem was probably with me. So I broke with my normal tendency and actually looked up some strategy articles on BGG. There I discovered some nuances to the game that I hadn’t considered before, which is a little embarrassing because it’s such a simple game. Anyway, I ended up playing a few games with my wife recently, and it turns out I was selling Lost Cities short. I had a great time, and we actually played a couple games in a row. I don’t think we’ve done that with any game since before our kids were born.

You might be questioning the wisdom of revisiting a game I was sure I hated, and that’s reasonable. But I do find that it’s sometimes good to revisit games after a few years to see if anything’s changed. One reason my opinions on Lost Cities shifted so drastically was that I’m simply in a different place now. When I wrote the game off I was neck-deep in my “give me theme or give me death” phase. Never mind that theme is a good deal more nuanced than I understood at the time, and indeed is more present than I assumed it was in Lost Cities. It looked like a simple, abstract card game to 2010 Nate, and that’s all that mattered. But 2014 Nate is a different guy. He doesn’t mind simple games nearly as much, and he is a lot more comfortable with heavily abstracted themes.

It’s hard for anyone to shift a strong opinion, and that’s true of board gamers as well. Part of that is just practical. It’s convenient to be able to categorize games as being terrible, because it limits the number of games we’ll feel compelled to play. But I think there’s also a sliver of identity that seeps into it. Since our board gaming world revolves so strongly around the internet and online interaction, opinions are sometimes distilled to a point where they become stronger than they would in real life. In its worst form, online discourse can make someone identify themselves based on their likes and dislikes. It’s why whole pages have been written debating the merits of MST3K hosts and Starfleet captains, and it’s also why it feels a little like a crisis of identity when I suddenly discover that I like a game instead of hating it.

Truthfully, I don’t really buy into such tribalism, especially not in board gaming, where the bulk of the value I place on the hobby is in the real world. But I am a little aware of how it might look if someone who reviews games does a total 180 on his opinion. Does a shift in opinion invalidate the earlier opinion? The answer is a resounding “of course not.” It’s strange to me how people will sometimes try to catch a writer in a web of “inconsistency,” even as we all know our tastes and circumstances change constantly. I am glad to report that I have moved on from where I was five years ago, and I hope you have too. This is why I like to sometimes write about games a second time. First impressions have value, but so does the view from the other end.

One thing that does bother me is that someone would be dissuaded from trying a game I ended up liking more than I thought. Not that Lost Cities needs my help to become a big hit or anything, but it’s a good reminder that it’s alright to change your mind on a game. No doubt there will be something else I’m reassessing five years from now.