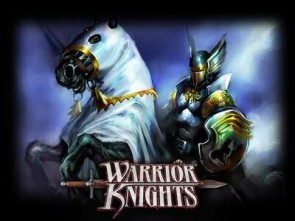 Game Name
Warrior Knights
There Will Be Games

I've always really liked FFG's Warrior Knights.  I get the criticisms, and they're mostly valid, but the issues aren't big issues for me.  Highly recommend getting the expansion and just using it from the get-go though.  The game is rules-heavy enough that adding a few extra things doesn't make it significantly more complex, and the experience is just better.  Once you get comfortable with all the rules and moving parts the closest thing I can relate FFG WK to is A Game of Thrones the book/show in game form.  There's a lot of jockeying for position, religion, offices, tenuous alliances, and of course fighting.  The game doesn't feel like it's trying to be set in a particular place in history, but rather it attempts to be evocative of a period.  It's fun to play the roles of Head of the Church or Chairman of the Assembly or, if you're a poor title-less Baron, to scheme against them.  The game mechanics give you ways to do that, but it does take several plays to fully grasp all the different systems at work and how they mesh together.  The end result is that the first couple plays are sometimes confusing and it can feel like people sometimes luck into opportunity.  The truth is that with experience players can work the systems in their favor and get a real feeling of "I made this happen."  The biggest issue with FFG WK; however, is that there are a few areas where players can game the design.  Once in a while you'll find yourself thinking, "I guess the rules allow that, but it doesn't feel right."  I've played a bunch of FFG WK and it hasn't ever been a significant issue for me, but once in a while I've caught myself trying to come up with house rules to iron out a couple wrinkles.

I had played FFG WK quite a lot before I ever played the GW original.  I was pretty comfortable with the sometimes overwrought design of the FFG incarnation and was really interested in how it might have mutated from the original game.  What I did not expect was for GW WK to be so... clean.  The rules aren't really written all that well, but once you've figured them out the game really hums along in a way that FFG WK never has.  Every single thing in GW WK is more straight-forward and intuitive.  Combat?  Die roll.  Voting?  Pen and paper.  Movement?  Let's talk about movement.  The FFG game requires cards to be played, you usually don't get to move all that much each round, and achieving your desired positioning for a battle or a siege usually takes a few turns.  The GW game just lets you move your Barons without any special requirements.  The result is that GW's game is much more vicious.  There are no safe corners of the board that will give you a couple turns to figure out whether the enemy is coming for you.  When the enemy comes, and it will come, it will be at your gates in short order.  GW WK, to quote Mr. White, "is like a swift, gauntleted punch in the mouth."  He's right.  Hell, the game begins with an Assembly phase where you suddenly have to start by putting players on unequal footing.  You'll make enemies quickly.  One thing that makes our games especially vicious is that, since we already have pens and paper for various game reasons, we allow passing notes above the table starting after the first Assembly.  Everyone knows you sent something to your neighbor, but only you and he know what it was.

Setting and theme is an interesting topic for these two games.  They're ostensibly the same setting, but there's something markedly different between the two.  FFG's version has missions, scholars, a religious system, and other machinations that, like I wrote above, make it feel more evocative of a period than truly set in one.  It seems to be a romanticized version of an era, and it really does remind me a lot of A Game of Thrones.  GW's original, while probably not designed to represent a specific historical situation, has a more honest medieval setting.  GW's Barons are Barons, not the scholarly political warring heroes of the FFG game.  The GW game is more true to a maybe-possible historical period than FFG's "Wouldn't it be cool if..." design.  The end result is weird, because in GW WK I care more about my towns, troops and nobles.  The idea that the GW game world could be a real time and place seems to make my actions more meaningful.  I shouldn't give a shit, honestly; we're talking about a little card that says I have Romanian Mercenaries that need to be paid, but I do.

So the burning question: If you're going to play one, which one should you play?  If you like the FFG school of design then their version with the expansion really does have enough to it to be called a coffin box game in a normal sized box.  If you are indifferent or aren't particularly a fan of the FFG school of design then play the GW version.  I really enjoy both games and can't pick a favorite, but I lean slightly towards the GW game simply because you get to the meat of the game immediately, and the tension holds for the duration of the game.  But sometimes all those FFG systems in their Warrior Knights mesh together just right and you'll be gloating while the other players sit in disbelief.  The truth of it is FFG should have given their game a different name like, "SomethingSomething (inspired by Derek Carver's Warrior Knights)."  They didn't though, and because of that these games will always be compared even though they are different games that are both great for different reasons.

Sagrilarus replied the topic: #204892 24 Jun 2015 16:04
I very much enjoy both games, though the original is more my thing. "Clean" is the proper word to describe it. I'll be honest, I had a devil of a time with the card combat in the new version just because it seemed so convoluted in comparison to the original. Constricting as well.

southernman replied the topic: #204895 24 Jun 2015 16:55
I quite liked the card combat even though I love rolling the dice. I've played the FFG edition a few times but it's a hard game to get out as you need the right crowd and, being best with 5 or 6 players, it always has competition when I do have that crowd from lots of other great games.
I have had the GW version longer than the FFG one but fate has never conspired to have it played.

mikecl replied the topic: #204896 24 Jun 2015 17:51
I have the FFG version of Warrior Knights as well as the Crown and Glory expansion which adds quite a bit of extra stuff: town levies to support armies, garrisons to defend cities and a larger Fate deck,. I bought the game when it was first released and never got the opportunity to play the original. I have to agree though that the FFG version like a lot of FFG designs is definitely on the clunky side and not very intuitive.

It's still good though. Almalik wrote: Do you have a higher-res version of that map? I found the website link but it looks like it's down.

You know, I looked for it yesterday. I had the high res version saved off somewhere, and I thought I mailed it to someone years ago on gmail. But haven't been able to find it yet.

Almalik wrote: Do you have a higher-res version of that map? I found the website link but it looks like it's down.

You know, I looked for it yesterday. I had the high res version saved off somewhere, and I thought I mailed it to someone years ago on gmail. But haven't been able to find it yet.

Closest thing I could find was the original artists page on DeviantArt , but it's probably not big enough to make into a game board unless pixelated images get you moist.


EDIT: The Wayback Machine has it .

Obviously, I'm a big fan and I agree...the towns and armies...well the 'world', I suppose feel more real in the GW edition. I think, for me, it's because the FFG version is so mechanical that focusing on gaming these subsystems to win pulls me out of the narrative. I also _really_ like the medieval, woodcut look of the card backs in the GW game. Plus ,those little shields are way more functional that the plastic minis of knights on horses. That GW game is a fantastic production.

How do you feel about the viciousness of the Fate cards in the GW game? Do you play them as written? Only draw one for the table per round? Prefer some other house-ruled variant?

What's the deal with this Iraq map? Do you use all the other pieces from the original game?

Mr. White wrote: How do you feel about the viciousness of the Fate cards in the GW game? Do you play them as written? Only draw one for the table per round? Prefer some other house-ruled variant?

What's the deal with this Iraq map? Do you use all the other pieces from the original game?

I like the Fate cards. They bring a sense of foreboding to the game, and their viciousness means that you have to stay flexible. I've always really liked vicious and dramatic event type cards; cards like that are among my favorite parts of games like Civilization and Age of Renaissance. I play them as written in WK. I can see why some people feel they're too unbalancing, but I feel they help write a better story for the session.

I haven't played the Iraq map, but there are some basic instructions at the Wayback Machine link above.
Read More...