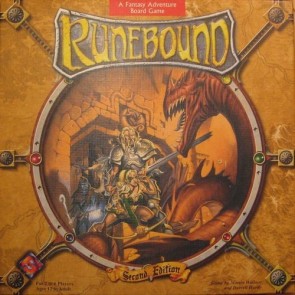 This is a wrapper article, linking all of the parts of the Runebound Shopping guide in one location.

Hopefully these articles will assist you in sorting between Runebound's many expansions to find the ones most suited to your needs.

I will be updating these articles periodically as new expansions are released, so feel free to check back at a later date to see how they fit in.

Other things which may be of interest:

You can find my own personal rules for playing the game solo at:

If you own the Midnight expansion and wish to attempt to automate the Night King’s role so you can play it as a pure co-op you may find the house rules there useful too.

I use the following house rules when playing Runebound:

1) Use the shorter Variant rules found in the back of the rulebook. Makes for a quicker game without really losing anything.

2) I ignore all of the other optional rules, especially the doom track and travel hazards. I don’t like them

3) Semi-Softer knockouts – When knocked out either loose your highest cost item / ally OR all of your gold, whichever has the greater worth.

4) Split market deck - seperate your Allies and Items into 2 seperate market decks, and draw one card from each pile during a market step (as well as at the start of the game.) Only recommended for those who have very large market decks.