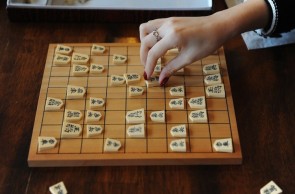 I hate chess. So I’m going to write an article about chess games. I don’t think chess is a bad game, I just don’t process it very well. If my opponent can run the game long enough I will just fail to spot bishop and knight moves and lose pieces. I do however love abstracts, and learning games from other cultures. With that in mind here is a very brief intro to Shogi and Xiangqi, chess for Japan and chess for China.

Apart from the great aesthetics, damn that’s some good print on wood, the best thing about Shogi is the drops.

No one dies in Shogi, they just betray you to the other team when captured. Then in lieu of a move they can be dropped on the board. This makes piece swaps far more interesting as you may swap a lance for a pawn, if you can drop said pawn into a game winning position on the next move.

The downside to this is games run long, as the board does not necessarily empty out. Shogi is less a battle and more a siege. Strategies revolve around complex castling set ups and then the game is race between the two players to break down the opponents castle. There are dozens of castling setups in Shogi. I’ve never got beyond the basic Mino.

What a jolly fellow, Yoshio Kimura inventor of the Kimura Mino castling move. The fact that castles can be named after people tells you a bit about the kind of game this is. Heres the wiki for just Mino type castles https://en.wikipedia.org/wiki/Mino_castle

The pieces in shogi are pretty feeble, you get one rook, one bishop and a truckload of glorified pawns, and things can devolve into trench warfare a bit. On the plus side if you can get your feeble proto pawns across the board to your opponents back three rows they promote to the best version of a proto pawn, a gold general. 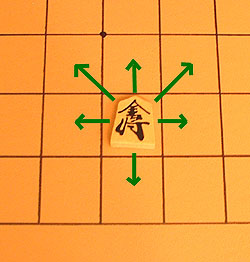 A gold general, with its moves, one space in several directions

Shogi fascinates me, but I still struggle to parse the game. Even more than other chess games it is about sequencing a series of moves, but with shogi, each move may be small, one space, and several pieces may be dropped out of the either. Xianqqi on the other hand I actually enjoy playing.

I’ve gone over to China and been beaten pillar to post at this game. My favourite memory was playing some old guy for 1Yuan (10 pence) in a market place in Xian at close to freezing. it took him about 10 minutes to find my king. 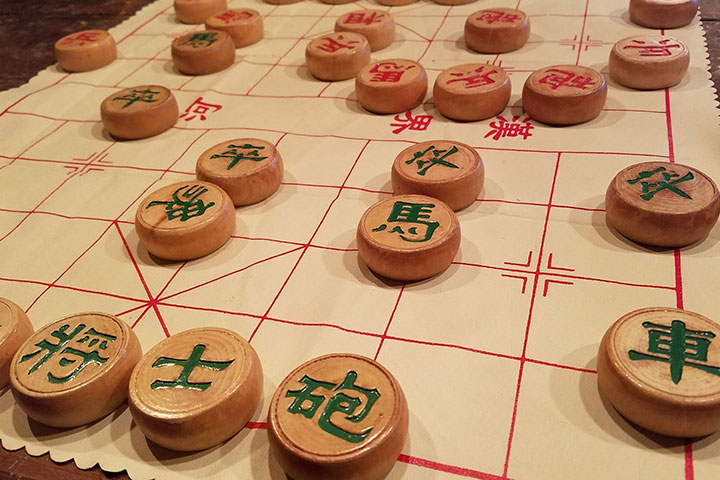 Xiangqi mid play. The king is on the centre line flanked by two guards.

Xianqqi is the leaner meaner chess game. It’s what you would get if Knizia redesigned chess. You only get 5 pawns, so no walls, and you get 2 rooks, and 2 cannons. Cannons are rooks that jump like knights, or flying fish, or even cannons if analogies are not your thing. Further, the king is trapped in a nine by nine grid in the middle and cannot face the opposite King. If Shogi’s kings are wrapped in a cocoon Xiangqi’s are near straight in the firing line. The main of the strategy revolves around controlling the centre line as this is the most efficient way to force a mate.

Did I mention lines? Pieces move down the lines from intersection to intersection, not from square to square. In practice this is a more visual effect the results are the same. There is also a river in the middle of the board that some pure defensive pseudo bishops cannot cross.

Typically I move one cannon to the centre line, and try and eliminate my opponents’ central pawn. The cannon can only attack if it jumps another piece, so it requires coordination. I then try and develop my rooks and knights in a similar manner to western chess but with fewer pawns in the way. 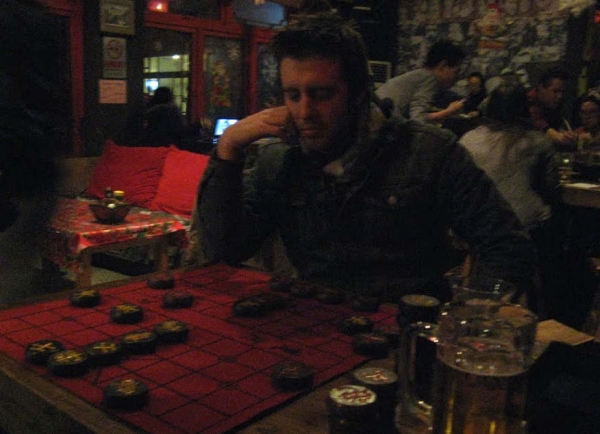 Yours truly, a few beers into an eve. Losing a game of Xiangqi circa 2013 in a youth hostel in Beijing.

Xianqqi games in my experience generally play in about 15-20minutes. The early game is about 3-5 moves and then it is bloodshed. It’s a game that cuts to the chase and I prefer that. It is also much easier to parse once you are familiar with the pieces. Once free the rooks and cannons will rocket around the board, but most of the guns are pointed towards the centre line and the king, its a question of getting the right blockers in the way. Xianqgi is truely a game of the people, all sorts play it and there are plenty of games in public.  The short play time allows people in china to roll out games (the board is often cloth) on the floor at the bus stop. How many games can you do that with?

jason10mm replied the topic: #320898 19 Mar 2021 17:19
These look really interesting, and the web crawler obediently filled my ad space with "Yellow Mountain Shogi" sets from amazon at a variety of price levels.

I love physical abstracts like this. That wonderful THUMP of a Go stone on a good hollow board, meaty marble chess pieces, the clink of tiles of a mahjong set. These games look to have similar tactile qualities.

The psychological factor being culturally specific is a fascinating concept as well. Media certainly has latched on to it, how many strategic masterminds are shown playing chess, or the bluffing contest of wills masquerading as a game of poker or blackjack. There was a sci-fi book series way back called Chung Kuo or something that used a lot of Go metaphors for depicting the oblique Sun Tzu type maneuvering of the characters.

DukeofChutney replied the topic: #320900 19 Mar 2021 17:58
The physicality is a big part of what makes a good abstract. My Xiangqi set, and many others, has big chess men that you grip in your paw and move around. I've a very cheap set of shogi chess men, but if i had regular opponents I'd get a good set. I've submitted articles on Mahjong and Go to follow this, both of which have nice clacky components.