Game Name
Go
Players
2 - 2
There Will Be Games

When Lee Sedol lost to the Alpha Go Google AI software in 2016 I was more impressed with Lee than the AI.  Yes AI had finally mastered Go, but man alive, did Lee beat it in one game of 5. That software has played millions of games against itself and created a heat map referenceable for any board position to determine the mostly likely play to eventually win the game.  Perfect memory. Lee took on an opponent that had played millions more games than him, and won one game. I was ridiculed by my work colleagues for watching the games on my lunch break.

I love Go. For the uninitiated Go is an ancient Chinese game, though now more popular in Japan and Korea, about placing black or white stones on a board. Two players, black and white, are trying to capture territory or the other players pieces by surrounding them with their stones. The rules are very simple, each turn you place a stone. You cannot make a suicide move, you cannot return the board to a pervious state (ko) and if you surround the stones of another player orthongonally they are captured. The game ends when both players pass thinking they cannot improve their board positon. 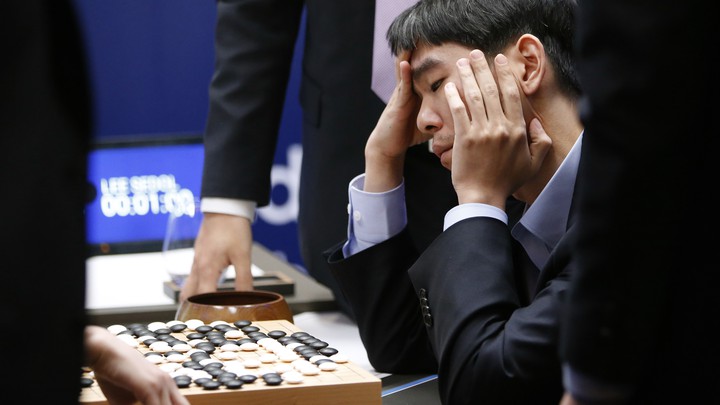 In man vs machine, the machine does not get tired

The big catch for new players is that last statement, the game end. Go is principally about capturing territory, easy enough to understand but harder to visualise. What is captured territory verses what is open space that can be invaded by the other player. This is hard to grasp until you have been beaten a few times. A hard question to answer in words, but if you don’t want a boring explanation of what ‘two eyes are’ I will say if there are about maybe 30 maybe 40 spots available I may consider invading as I could defend my stones and keep them uncaptured even if those 30-40 spots are behind your lines. Essentially territory is secured if your opponent doesn't think they can take it off you as you would just capture all their invading stones.

Nearing if not at the end game. White has a fairly solid win by the look of it, the right hand side is their territory, black has secured naff all.

What makes Go a great game? A game better than chess, or any other abstract? It’s the early mid game framing. In Go you have a 19x19 grid. That equates to 361 possible opening moves. In reality a few dozen are sensible, but that possibility creates a game that cannot easily be calculated. Rather Go is a game of principals; thickness and thinness in defence, building from strength, tempo and lots of other jargon terms I could use.

The best way to understand Go in the early game is like a dot to dot drawing from a childrens colouring book. You are laying down dots to structure what you will eventually draw. The trick is in laying down dots not to far apart to be cut to shreds by your opponent, but not to small that your opponent grabs the rest of the board in territory.

As you build this frame you and your opponent will challenge each other to tactical battles where you will try and wall each other off or take each others stones. Do you go in for a battle? Or ignore it and keep structuring the bigger picture? It's these questions that make the game, and they are damn hard to make.

My favourite book on boardgames is a Go strategy book; Lessons in the Fundamentals of Go by Toshiro Kageyama. Some choice quotes;

"The wish to become stronger - half a stone stronger, one strone stronger .... it is one manifestation of the human spirit and ambition which continue until death"

"In the world of Go also, a long tradition of intellectual combat has distilled the professional into something the amateur can never become... he has learned to view every other person as an opponent to be beaten and crushed" 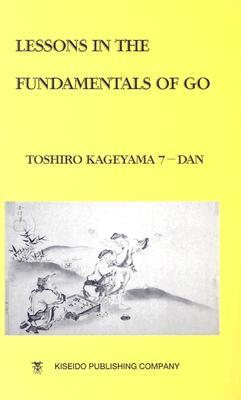 Its fair to say Kageyama takes his Go seriously. I love this book, not just because of the great advice it includes, because he goes all in for ridiculing you the reader for being to lazy to impliment his lessons. In my case this is completely fair.

Its shame Go isn’t more popular. I can find online game if I wish, but for me board games are about spending time with people, so I tend to gravitate towards games my local friendship groups enjoy. Go I’ve taught to several, but only one or two have taken to it. If I liked chess I would have no shortage of opponents, but chess is lame.

Jackwraith replied the topic: #322129 15 Apr 2021 10:23
I've long aspired to become better at Go, but have had neither the ambition nor the regular opponents to make it happen. There was a Go club at one of the nearby universities that used to meet in a (now closed) coffee shop on a weekly basis and I made it there a couple times, but that's as close as I ever came to finding a regular group that was interested. And then I got distracted by other things.

What occurs to me about games like Go and chess and other classic abstracts is that they've been developed to such a science that if you want to really play, you have to play all the time, and I find myself wanting to play a variety of things too often to narrow my window that much. I'm still interested. I've just never been able to get over my various hurdles.

jason10mm replied the topic: #322135 15 Apr 2021 10:37
Go is absolutely brutal. I feel like with chess you can learn the moves and 2 novices can gave fun. But with go the applications are so layered that it really needs a lengthy tutorial period to click.

It also sets up a nice east/west philosophical division IMHO. Sun Tzu's Art of War versus Clausewitz' On War. No front line in go, it requires a much more distributed plan of conquest than chess. Fascinating game and one that has an amazing tactile nature to it as well.

I've always felt that if we contact an alien species, Go is one of the very few games we will have in common. It's simplicity and depth transcends.

If you've haven't read it, Master of Go by Kawabata is the best novel I've ever read about the experience of playing a game.

jason10mm wrote: Go is absolutely brutal. I feel like with chess you can learn the moves and 2 novices can gave fun. But with go the applications are so layered that it really needs a lengthy tutorial period to click.

QFT. I picked up Go on a whim from a bookstore and thought it was really fascinating. I quickly got good enough to make my friends not want to play with me. Then I decided to play online and got steamrolled so badly, by some of the lowest-ranked people on the server, that it was just completely demoralizing. I didn't even understand what I did wrong. I tried one more time, and after the fifth move my opponent just quit the game because I wasn't good enough.

So now I don't play. I miss the idea of it, and it's still a fascinating ruleset -- it feels discovered rather than invented -- but playing it was just miserable.

dysjunct wrote: I tried one more time, and after the fifth move my opponent just quit the game because I wasn't good enough.

See, that's just bizarre to me. I trained at an aikido dojo for a dozen years. For the last few, I was regularly teaching classes in slots where the main instructor couldn't make it. Teaching was always a hugely eye-opening experience for me, because you see things from an entirely new perspective. ("So THAT'S why that works-! [To students] I mean... That's how that works! See? Just like that.") You were playing on the lowest level of the server and someone decided they couldn't take 20 minutes for a game with you and perhaps give you some pointers on placement and territory? I wonder if they were just masochistic enough that they only wanted to play people who were vastly superior so they could get their heads kicked in the way you were? Strange.

But, yeah. I sympathize. I lost all the time at that club I mentioned, too.

DukeofChutney replied the topic: #322181 15 Apr 2021 18:32
I played quite a bit online ten years ago with mixed results. There is a saying in Go it is good to lose your first 100 games fast. I definitely did that.
I gave up on online play mostly because on the few occasions i was winning live games my opponents sometimes just ran down the clock hoping i would quit or lose connection. This really annoyed me so I packed it in and never picked another site.

Jackwraith wrote: What occurs to me about games like Go and chess and other classic abstracts is that they've been developed to such a science that if you want to really play, you have to play all the time...

I think this idea holds me back from diving into Go but I know it shouldn't. I can have some fun and challenge playing Go casually. I don't need to think that it's pointless since I'll never study enough to make at least 1dan or whatever. Playing a little bit of Hex somewhat recently got me over that hump I think, as I'm pretty terrible at it but still had fun against people that were at a similar experience level as myself.