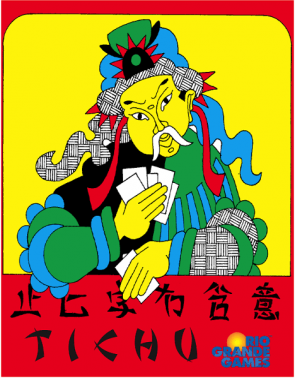 Game Name
Tichu
Players
4 - 4
There Will Be Games

A lot of abstract games are a definitive of a point in my life, like a favourite record that reminds you of when you were 16. I played Go between weighing sediment samples in the lab during my masters degree, Xianqgi when I went to China and against the Chinese students I knew. Tichu was a Friday night fixture with my Spanish friends in a fluorescent lit kitchen, we had cheap beer, a white chipped MDF table and the Tichu tin, and we were completely addicted for a season.

Other games might define a time in a persons life, but abstracts if they are encountered in more than passing have to take this role. There is no story you can just drop in for once every 6 months, there are no systems you can learn to grok and then discard for the new hotness. You either go through the layers of strategic depth or pass on after the first glance.

Tichu is a four player partnership card game, marketed as a Chinese game but designed by a Swiss, Urs Hosteller. The game is perhaps an east meets west as the core is the Chinese card game Zheng Fen. Taking the basic card play, Hostettler has added partnership and bidding play found in many western trick takers.

Zeng Fen is a ladder game, a form of trick taking popular in China and found in President/The Great Delmutti. The entire deck is dealt out to the four players and then the player with the 3 of hearts leads the first trick. Each trick a player leads and they lay down a set the others must better. Perhaps they lay down a pair, or two consultative pairs, or a three of a kind or a run of a given length. Each player in turn then follows laying down the same set of higher card value if they can. This continues until all but one player passes who wins the trick and captures all of the cards laid down. Of this pile of cards the tens are worth 10pts and the fives 5pts. Play continues until players runout of cards with the last player in giving their hand to the first out to add to their score. 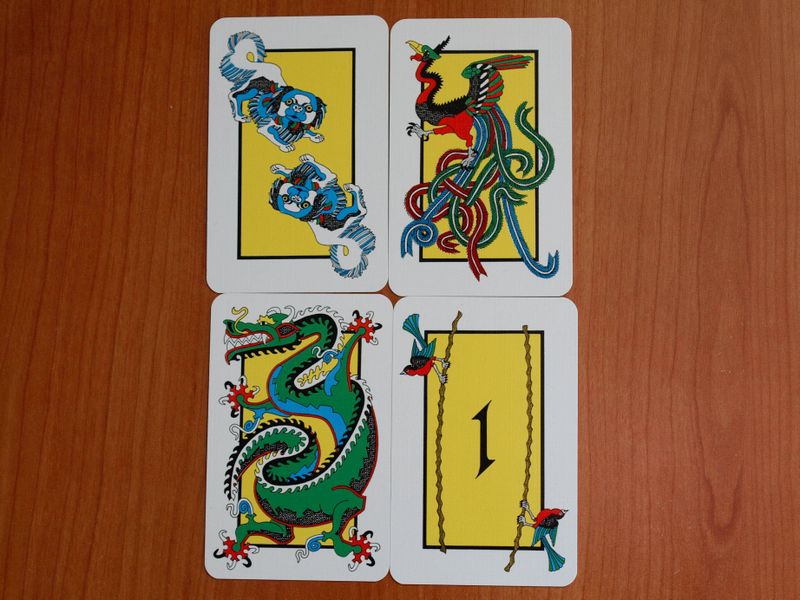 This fundamental card play is little changed in Tichu. Zengfen had bombs (a four of a kind could be used to on any tick to auto win), and Zengfen used the jokers as wild cards. These wild cards are pumped up in Tichu with a phoenix used as the wild, a dragon used as a single highest value card and a dog that can be played to transfer leading a trick to your partner.

Partnership is a staple of four player card games and a woefully underappreciated mechanism in designer games. You win or lose with your partner, but you cannot see their hand and cannot tell them what is in yours. You have to get to know them, to know how they play and how they respond to yours. This experience far surpasses anything coop games offer and is a major reason why these games reward regular repeat play.

You do get to pass your partner one card, and each of your rival’s one card, giving you a little more knowledge of what is in each hand. Decisions like what to give seem small but can have a huge impact on the game. You’ve played with someone for a while, you look at your hand, and somehow you just know they want a massive run and just need an 8eight to compete it, so you pass that and get it right! 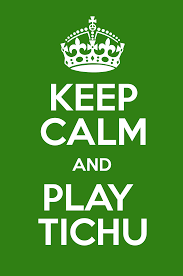 Tichu is a game with levels, at first you learn not to end up sitting with just one weak card remaining, or you can never follow a trick and go out. Second you learn how to appraise your partners hand by what they pass you, and how to spike your opponents’ hands with the trash you hand over. Third you get to know how to run your hand out fast, and when to capture key tricks and when to just try and get out first. Last, you know when to call Tichu.

Unlike some other games covered in this series, I have hopes I will one day Tichu again. That I’ll find a group of three others that want to be addicted to a swingy card game, that want to learn each other tendencies as well as the cards. It’s a game that dug into my brain for nearly a year several years ago, its collected cobwebs but it wants to be brought back out.

What games defined a season of your life? Do you want to go back there, or is it best left in those fond memories?

san il defanso replied the topic: #322736 30 Apr 2021 10:42
Tichu defined a section of my life as well. Around the time our first son was born, me and some friends got into Tichu in a big way. It was a given that on just about any night we could call up a couple people, who would drive over to our place and play with my wife and I. This kept up for about a year or so.

Since then I have played far less, but I still really enjoy the game. Its biggest difficulty is that it's kind of a difficult game to teach. I think the way the different wild cards behave is just a step too far for some people. But when people get over that hump they are almost always hooked. It's just such a great card game.

RobertB replied the topic: #322737 30 Apr 2021 10:47
I got dragged into a game of Tichu by some folks who were missing their fourth player. I warned them in advance, "Gonna warn you, I suck at Tichu." Then I showed them that I wasn't lying. It is a lot of fun, though. The problem is that one of the members of our family foursome doesn't like Tichu.
Read More...