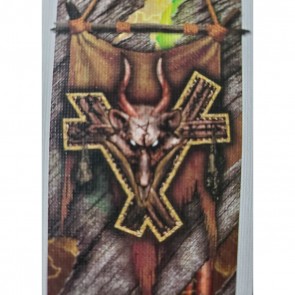 The rats in the walls are now covering the countryside...

My first Warhammer Fantasy army was Lizardmen, as I got into WHFB a couple years behind my entry to 40K. I collected, painted, and endlessly played a few more: Tomb Kings, Chaos Warriors (Slaanesh!), Chaos Daemons, and Ogre Kingdoms, but eventually sold them all until I finally arrived at, appropriately, the opposite number of the Scaly Ones: Skaven. Something about the overwhelming tide of the vicious Ratmen and their bizarre science crossed with magic just sang (chittered?) to me. It's the only Fantasy army I still have and it's enormous. I'm not sure that I'll ever part with it, even though I haven't played the game in over a decade. So when FFG decided to add an expansion to Chaos in the Old World; a game which, truth to tell, didn't really need one, given the depth of its gameplay, I was instantly in as soon as I discovered that they were not only adding a fifth god to the stable, but that it would be the Horned Rat. Suddenly, the verminous horde would be available, skittering across that map on human skin. So, so appropriate... 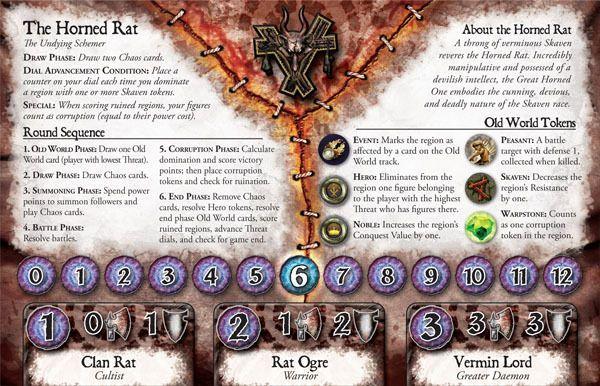 Thankfully, the design of this new faction kept the inspiration that powered the original four and neatly took advantage of an element that was already present in the game in the form of the Skaven tokens. But the design was, appropriately, largely based on figures, of which the Horned Rat has more than anyone else. Right away, that makes them an easy target for Khorne, of course. But their pursuit of Domination also makes them a direct challenge to Slaanesh, who also favors that route, so there's an easy social engineering angle for any Rat players who feel like they're being picked on, especially since Slaanesh is the one god who can usually win a dial race with the Blood God. Since the Rat is targeting Skaven tokens for dial advancement, which already reduce regional Resistance, it also has kind of a leg (claw?) up in performing both paths of victory. However, going last in a game of five can be daunting, as you will often find yourself squeezed out of card slots (which one of your upgrades can get around, but we'll get to that) and subject to responding to others' actions. But just like Slaanesh, your Chaos is equipped for that but in a different manner. Instead of directly impacting their actions, like rats you pick up the crumbs and scurry away with them. You look for the crevices, the regions that no one is bothering with and which you've hopefully been able to move Skaven tokens into. Remember, too, that your Corruption level is the cost of your units, so that having more dudes (the very esssence of Skaven) means that Rat Ogres and the Vermin Lord are worthwhile buys if a Ruination strategy is taking place and you've decided to get in on it. The Horned Rat is one of the more difficult gods to play and doubtlessly targeted to more experienced players (as is appropriate for an expansion faction) but it can frequently steal wins by just hanging around the edges and, like Tzeentch, highly emphasizing card play in order to make your dudes more effective. Strangely, I've also found that the game is often easier for Rat players with the other four gods using their original decks than with the expansion decks, for whatever reason.

With more Cultists than even Tzeentch, they are the root and branch of your play. In that respect, the Clan Rats (Why is it two words when GW has always used it as one (Clanrats)? Dunno.) upgrade would almost seem to be required. But that's usually only when you're being excessively targeted by Khorne or other Warriors. That also makes the Rat Ogres upgrade quite useful, since they're one of three gods that have Warriors with 2 defense, which can often forestall any further attention by Bloodletters and definitely from other Warriors, whom will seek easier targets. The Vermin Lord is an "average" Greater Daemon, but the upgrade can make him seriously useful if a Ruination strategy is in effect since he'll be cheap to move around to get the biggest bonus. But, again, the most important upgrades may be the non-unit ones, as The Council of Thirteen will let you counteract that "going last" problem in at least one region, which can be huge if you regularly find yourself thwarted by opponents who are trying to take advantage of your placement in both turn order and on the board. The restraint is that you can only do so once per round. With that in mind, the upgrade that I've used most often is definitely The Under Empire (again, why two words?), even without a Ruination strategy in play, as it works nicely with both Skaven tokens in play (which are almost never removed) and with a couple of your Chaos cards that already emphasize the rapid movement of the horde. 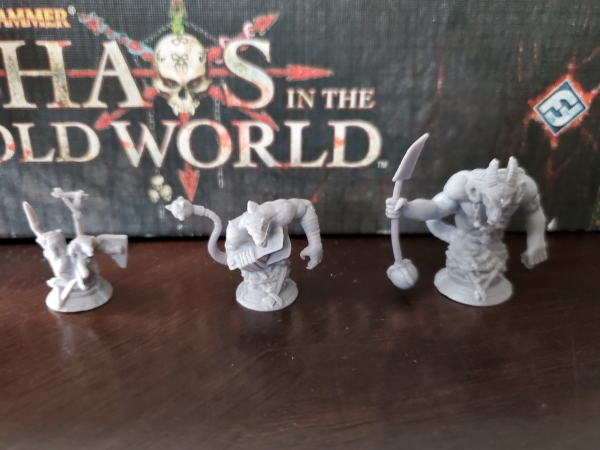 More than any other god, Cultist placement is key for the Horned Rat. Similarly to Slaanesh, they're likely going to score most of their points through Domination. They'll just be doing it in converse fashion (-1 Resistance for the region, instead of +1 Conquest value; quantity over quality.) That makes cards that focus on said Cultists the key to success in a variety of ways, like Verminous Horde, which works for the Rat the way Temporal Stasis does for Tzeentch, as long as you outnumber at least one opponent. Similarly, the famous Strength in Numbers (perhaps the most notable rule for Skaven in WHFB) works the same way in preventing Khorne and others from achieving easy kills on your Clanrats. Playing off the Domination you're hoping to achieve is enhanced by cards like Doomwheel, which only increases your point total at the cost of 1 Power, or Skitterleap, which lets you exploit your numbers advantage in more than one region in a round. Keep an eye on the Corruption level, though, as you don't want to surrender the big Ruination bonus for second place if too many of your rats scurry away. Screaming Bell will go a long way toward achieving your Domination of regions where you don't have as many Clanrats, while Warp Token Cache, similarly, will help you pay for all of your Cultists moving around. With an overall deck cost of 24, the Rat's deck is cheaper than anyone's but Tzeentch, with only two cards (Warp Token Cache and Screaming Bell) costing more than 1 Power. Empty the Warrens fits that cheap theme by allowing you to get more Skaven tokens into play for nothing but a card slot which, again, serves your Domination strategy, as well as dial advancement. But the best card of all may be the simplest, as Grey Seer gets you 3 points of Domination value for 1 Power and, most importantly, gets two more Clanrats on the board to be used in all of the above scenarios. Like all cards, it also doesn't depend on adjacency for placing those Cultists. As always, keep in mind that Warp Token Cache, Strength in Numbers, and Screaming Bell all have magic symbols, which brings the eye of Tzeentch to those regions. 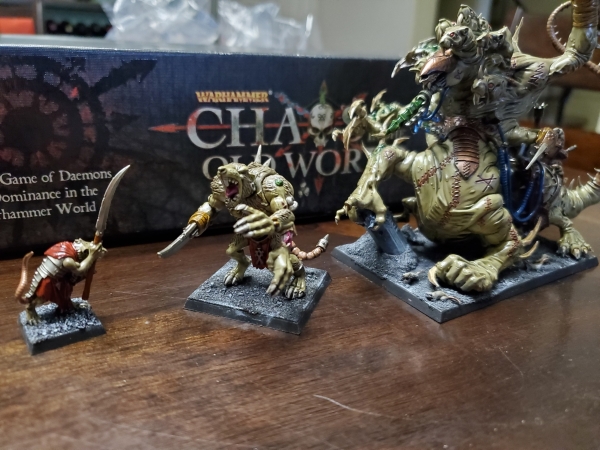 (I don't actually own a Horned Rat model as I never used one with my rats, so that's a Hellpit Abomination.)

Horned Rat play is, first and foremost, how you can manipulate your dudes (on the map) in a manner that will give you a constant presence past the Summoning phase, but doesn't disturb your opponents too much with your ominous gray horde until it's too late for them to do anything about it. That does, like Slaanesh again, often require a bit of social engineering from the rats (Not a phrase most would expect to hear or say...) as you innocuously spend much of your turn placing your little gray dudes in the places where it simply seems like they should go, with those regions that are already marked with the very symbol of the Skaven race. One thing to keep in mind, of course, is that Skaven tokens reduce Resistance for everyone. Making it easier for you to dominate does the same thing for everyone else at the table. If you have a close competitor on the VP track, it's worth considering how easy you might be making it for them to get access to a lot of points in the Populous regions if you feel like you can't compete right now. That's where Empty the Warrens comes in handy to take away that advantage for them and move it to somewhere you might be able to exploit it alone. That's also where both The Council of Thirteen and The Under Empire upgrades work well, since you'll be able to make those sudden switches of position no matter if the card slots are filled and/or if you don't have a Skaven token in a good spot.

I would love to go on and on about the ratmen (Warp Lightning! Plague Furnace! Rat Ogres with Frenzy!) but that would be talking about another classic game and this series has been focused on talking about possibly the best game that Fantasy Flight Games ever produced. These articles haven't been an exhaustive list of potential strategies and approaches because, honestly, I can't produce that. I've played the game dozens of times, but I still feel like there's more to explore in it, over a decade after it was released. The Horned Rat expansion just doubled down on that potential and, while I wouldn't call it essential, I think it heightens the enjoyment to such a degree (New god! Fifth player! New ways to play the old gods!) that, for those looking for a copy, I'd almost always suggest finding one for sale or trade that includes the expansion, not least because it includes my beloved vile rodents. For those of you who've played, I hope this was an interesting look back into one of Eric Lang's first masterpieces (One of these days, I'll write something extensive about Blood Rage and Rising Sun. Ankh review now live!) and an excuse to maybe bring that slightly battered box off the shelf the next time your group gathers for a little fun torturing the poor denizens of the Old World. 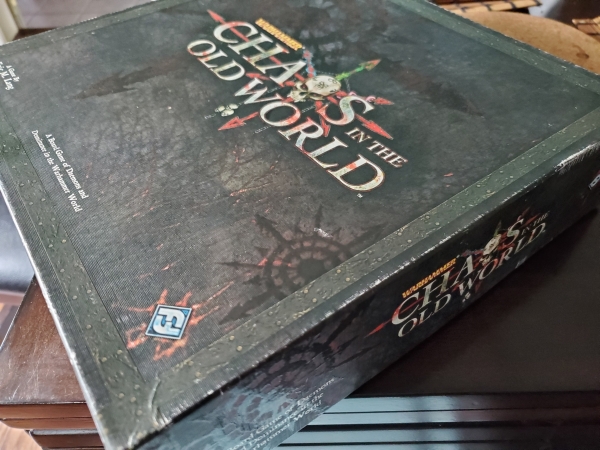 Discuss this article
Log in to comment
Posts in discussion: Chaos in the Old World: The Vermin King (part VI)

Jackwraith replied the topic: #329107 29 Dec 2021 10:34
Certainly possible. Like I said, it's a game that didn't really need an expansion, especially since most people with knowledge of the lore only consider the original four to be the "major" Chaos gods, unless you remember 2nd Ed. 40K and start including things like Malice. But I think they did well with the expansion in terms of both expanding the possibilities for the four base gods, especially in terms of those two that were thought to be mono-dimensional (Khorne and Nurgle), as well as introducing the Horned Rat to create varying compositions for four players. On top of that, adding the tougher Old World cards gave a new challenge to veterans, as well. It's really a great model for what expansions should/can be.
Read More...