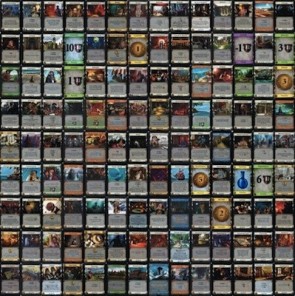 It’s rare that a game makes an amazing impression from the very beginning, so when it happens, you remember it. I’ve only had a few games reveal how impressive they are right away. The Settlers of Catan was one. Power Grid was another that immediately appealed to me. And in the fall of 2008, Dominion did it again. A lot of other gamers were discovering the biggest recent event in boardgaming at the same time. It was easy to be caught up in the hoopla, and if you ask me a lot of that hoopla was justified. Dominion is a rare game that essentially invented its own genre. It borrowed liberally from collectible card games, but the final result was really unlike anything I had seen before in board gaming. After that first game, we immediately set up and played again. And so began my 2-year affair with Dominion.

And boy, was I ever into it. It dominated that holiday season for my wife and I. We would often set up and play three or four games in an hour. It got introduced to just about everyone we knew, and it had a very high success rate. The intoxicating blend of variety and quick playtime made for a game that made it to over 100 plays in just a couple of months. That rate will burn through any game, and as the weeks wore on I began to become worried about the game’s longevity. But then came Dominion Intrigue, released a mere six months after the original. It was one of the rare games I preordered from a local store. And so began the stream of expansions, a new one every half a year. Intrigue was followed by Seaside, which I received as a Christmas present that year. I preordered the smaller expansion, Alchemy, along with many other fans. And I think by that time, I was beginning to run out of gas.

Between Seaside and Alchemy, my wife and I welcomed our first child, and gaming time immediately took a nose-dive. Even when my wife and I had an evening to ourselves, my wife did not derive much relaxation from playing a game, so we did not play games together as often. But when we did play, we still played a lot of Dominion. Alchemy didn’t quite impress the way the first three releases did, but it kept us playing for a while. But our rate slowed by necessity. As the next expansion, Prosperity, was delayed for several months, I eagerly anticipated what many were calling the best Dominion expansion ever. It seemed like the perfect time to jump back into the game that had given me so much.

I didn’t end up getting it until my next birthday. By this time, my Dominion collection had grown far beyond that of other games. Since I had no interest in keeping everything in seperate boxes, I had resorted to a large white card box, usually used to collect baseball cards. In there, I was able to fit all of the cards and components, along with makeshift dividers and the stack of rulebooks. It even had room for future expansions with sleeved cards. But a curious thing happened as I sat down sleeving the next 400 cards from Prosperity. It occurred to me that I hadn’t really gotten to play Alchemy as much as I wanted to. And now that I thought about it, I hadn’t really played Dominion for a couple of months. Everyone else seemed to be enjoying it still, but my main Dominion opponent was now more interested in collapsing on the couch after our boy was in bed. And after a few weeks playing Prosperity, I made the decision that I could probably stand to not pick up the next expansion (already announced as Cornicopia) as soon as it came out.

I wonder how many Dominion fans felt the same way. With a new batch of cards to explore every six months, it was beginning to feel like all of the theoretical variety was totally academic. Sure there are several million different sets of cards, but I didn’t play most of them, and there were already hundreds of thousands when I only had two sets. It struck me that future purchases were just going to be thrown in with the pile, so to speak. Another challenge was that I needed at least some new cards to keep myself engaged, but the new releases didn’t really have an entry point for people who weren’t already neck-deep. And I never really liked it much as a game-night game anyway. I pretty much just played it with my wife.

The effect of this decision was a little like a couple who decides to “go on a break.” You think the space will be good for you, and you will come back into the relationship in a month or so, ready once again to face the challenges of coupledom. Of course, what really happens is that you realize that while you were neck-deep in that relationship, the rest of the world was passing you by. And you see that maybe you’re better off without that other person. When I took a moment to step away from Dominion, all of my little annoyances with the game simmered to the surface. Its determined abstractness, its unrelenting blandness, and its endless variation on the same basic card types never bothered me when I was playing three times in a row. But with a little bit of space, I felt like I never wanted to mess with it again.

I don’t really mean this as a criticism of Dominion. I’ve always been aware of its faults, and even mentioned them in an otherwise positive review. It’s brought a lot of enjoyment to a lot of gamers, and I would never begrudge them that enjoyment. I’m more fascinated how a game that I loved so much could so quickly lose my interest. At this point, with a little distance, I think that Dominion might end up being a victim of its own success. Releasing a new expansion every six months seemed like a good idea at the time, but after a point it becomes more than any reasonable person needs. So old fans might bail eventually, and new fans have a hard time finding an entry point. But without the constant glut of expansions, it’s easy to lose interest in a game that is still basically the same as it was when it started out in 2008. More importantly, I changed. My tastes mostly moved past efficiency games, which is really what Dominion is. And with the arrival of a child and a general desire to play new stuff, the game just got crowded out.

If you look in my game room right now, you’ll see it. It’s that big white box, beneath Mage Knight and Cyclades. Why do I keep it if I am  finished with it? I’m not totally sure. My wife still likes it, and we dust it off every now and then. I still have friends who like the odd game here and there. But I think mostly it’s nostalgia. I’ve invested a lot of time and money in my old friend Dominion, and we had a lot of good times together. It almost feels somehow unfaithful to get rid of it. As silly as it sounds, getting rid of it brings just a little twinge of guilt to my heart. So it sits, mostly ignored. It’s like photos of a friend whom you stopped seeing. You will see them in passing, and they are a part of you, but you can never go back to the way things were.

Above image created by "tiggers" on Boardgamegeek.com.