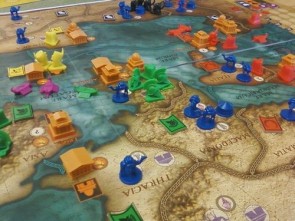 Late at night we tumble in from the pub, blood up with beer, hungry for destruction and junk food. Cheeks pink with cold, someone lights a fire and we hurl wood and paper into its bright maw, watching it curl and turn to ash. It's not enough destruction. We want to destroy nations beneath our booted heels.

Mare Nostrum gets pulled out from the tottering stack of tattered boxes in the corner. There is the sweet, viscous whisper of some sweet liqueur into glasses, promising a sweeter future. In the glow of the flames, we unfold the board and scramble for components. It's the new edition, Empires, with a box of poker chips for resources. I am Carthage and I sit, belligerent in my corner, slipping and clicking the satisfying plastic discs over one another.

Their weight in my hands and the beer in my blood makes me feel powerful. I eye up the board and decide: I want Sicily. The beer grins and whispers that it will be mine.

Of course, you don't mention this to the Roman player on my left. He's a paltry 20 years old, our host's son, and easy sucker bait. I do my best Cheshire Cat impression and tell him we're good, that he has no worries on our border.

On my right, the eyes of the Egyptian player narrow. He's an old hand at this, a man who's been a friend for longer than the Roman player has been alive. We've fought countless battles together, sometimes on the same side, more often as enemies. He knows the score. There would be no point offering him platitudes about friendly trade, so I don't.

The fire is warm. My palms begin to sweat.

The war begins, as all wars do, with peace. We trade amicably, sliding those delicious discs across the board to one another, seeking sets with which to buy the engines of each other's destruction. The Greek player is our host, a bewhiskered mathematician and a mean player of pretty much everything. He slides into an early lead. He's on the opposite side of the board and no concern of mine. But he's rather more alarming for my Roman and Egyptian neighbours.

The latter wants a pact to give him some space to fend off the Greeks, and he knows he won't get it. Instead, he wants to build a Trireme in the waters in front of my territories. This is space I need myself to build up and launch my attack on Rome. There is no value in deception here: I tell him no, that I am about to build there myself.

He stands and begins an impassioned speech. Gesturing with his glass emphasis, he reminds me of how many times we have stood together, he and I, against the skill and perfidy of our host. He recounts how once, in the cold depths of space, he sent his finest ships and admirals to my aid and we caught and crushed the paltry foe between us. How we have delved dungeons, built wonders, pleaded for the patronage of Renaissance nobles side by side. Now, he says, is no time to abandon such a grand auld alliance.

Everyone watches, transfixed. Even through the fug of heat and alcohol we all know. This is the moment history turns. This is the beginning of the end for someone. All eyes turn to me.

The tension pops and we rush toward resolution, trading and building. I'm first. I reach for the trireme piece. "Don't," says Egypt, but I look him in the eye and place it with stern emphasis. This is my water. Get your fucking boats off my liquid lawn. He sighs and does the same and we reach for the dice. The Greek player begins to giggle. And why not? It's his fate in the balance here, too, and it will go badly for him if Egypt wins.

It's down to a single roll, one tumble of fate to decide the balance of power. It's over too quickly, a sweaty fumble in the palm and I've lost. My ships sunk. I'm furious: such an important point can't have been decided with such speed. But there's no recourse, no card or hero I can use to avert my fate. I call down the wrath of every ancient God, all twelve of the plagues onto Egypt who sits with a smug I-told-you expression on his face. The Greek player is now laughing openly.

So for the rest of the game, I throw what few resources I have against the Egyptian wall. It's futile: not only is he a Trireme up on me but Rome knows my attention is elsewhere. He keeps Sicily and starts to carve into my territories. And every time I push pieces into Egypt the Greek player starts laughing again. It's infuriating like he's mocking my bad fortune.

He wins, easily, as it was obvious he would once I started a land war in North Africa. And on the final turn, he dissolves into hysterics, tears beginning to run down his cheeks and into his beard. With mounting annoyance, we all demand to know what's so funny. He goes to the box, pulls out the rules - which we've all read - and points to rule 4.1.1. It's even in bold. "The Active player chooses whether or not to initiate a sea battle. Sea battles are not mandatory".

Ships, in other words, can co-exist. We'd started a war, like so many misguided rulers down the centuries, over a technicality.

It's a miracle no-one flips the board. In fuming silence, we all get our coats and leave, heading home alone in the small hours of the cold night. Tomorrow we will no longer be rulers. Tomorrow, we will be conquering paperwork or DIY or recalcitrant children instead of nations. Tomorrow - indeed for some days - phones, emails and social media will be silent with nursed grudges. But next week, without a word of prompting, we will be gathered again for conquest anew.