From the Depths: Spiraling Down into The Hellgame 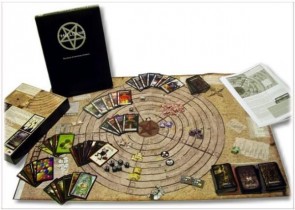 There Will Be Games
A little-known release from a one-time publisher, The Hellgame is the other side of German game design: visceral and thematic, but still mechanically interesting.

One thing to keep in mind about The Hellgame is that it's occasionally going to be hell for someone. Reiner Knizia once said that his ideal for game design was to create situations where all the choices are good ones and the challenge was to choose between them. In The Hellgame, you're often stuck dealing with the bad choices that have been thrust upon you, not just by your opponents, but by the game itself. But that's what being condemned to Hell is traditionally all about, right? 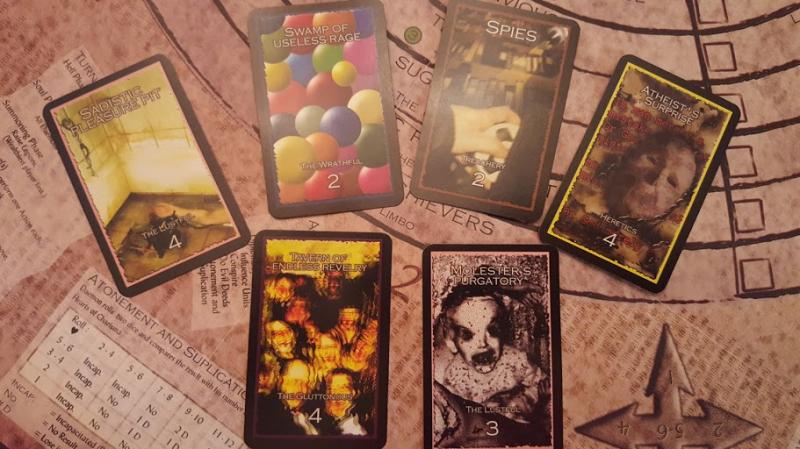 The game is a DoaM, the object of which is to be the first triumvirate of demons to control one of the nine rings of Hell. This is a game that was released before the improvements in production of recent years had made it cheaper and easier to put good miniatures on the table. Thus, the dudes on your map are cardboard chits, like those from the Avalon Hill days of yore. And the map itself is heavy paper. The upside to that is that almost everything is beautifully drawn or depicted and replete with imagery that embodies all different aspects and perceptions of what Hell might be; from a gore-covered room of weapons to a ball pit in the playground section of the nearest McDonald's. That imagery represents the driving force behind the game which embodies the now outdated concept of Ameritrash: theme.

Your trio of demons takes actions in Hell by recruiting legions and lieutenants to lead them and fighting the other triumvirates for control of the five Sectio that make up one of the rings on the map. You can, of course, try for more than one ring because that just hearkens back to the theme of arrogance, which suffuses most Christian perceptions of hell in the first place. Everything in this game is oriented towards theme, from the varied fonts on the Demon cards to the occasionally crushing events that emerge from the Hell deck. Given that it's possible for a winning position to be disrupted by the game in the form of the Hell deck (two cards draw at the beginning of each round with a random major and minor effect) or the wandering Lilith and Hellhounds, there are many that would argue that such a game is the antithesis of a proper tactical experience and certainly a far cry from the Euro design approach that attempts to reduce randomness. But, similarly to cult classics like Dungeonquest, The Hellgame actually encourages players to embrace that randomness as a way of attempting to mitigate its impact. 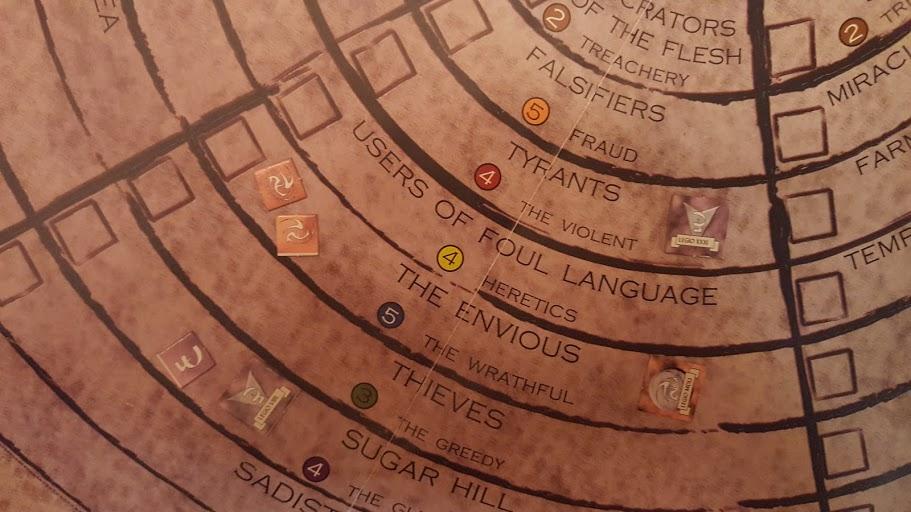 For example, each player wields a triumvirate of Demons. As one might expect, the Demons follow a strict hierarchy, in that more powerful Demons (one with higher scores in combat, magic, and charisma) are not only stronger, but also come before their weaker brethren in turn order. Thus, by default, most assume that whomever ends up with the most powerful triumvirate will win the game. But that's often not the case, since acting first is often detrimental and players can (and will) pay out Souls (the main currency, gained from controlling Sectio) or use cards to move down in the turn order track so as not to be caught out by those going after them. Similarly, Demons doing evil deeds on Earth in order to generate Favours (another more valuable currency, used to gain control of Sectio in the first place; it's not all about combat) can't be affected by most of the events of the Hell deck. But they also can't take actions in Hell, removing 1/3 of a player's ability to have real impact in the Action phase. So one either embraces the potential chaos or tries to navigate a safer but more limited path through it. That in itself is an example of attempting to turn the odds in one's favor, which is an aspect of game design down through the ages (think: poker.)

While the combat system leaves more than a bit to be desired (hitting on 6s, modified by your Demons and various Lieutenants directly engaging), especially for a DoaM, I think it basically anticipated a direction taken by designers like Eric Lang for games like Chaos in the Old World and Blood Rage, in which some DoaM games aren't actually focused on combat, as much as they are card play and executing a wider strategy. Unlike the theme-heavy miniatures games that were the often-derided "random" alternatives to German design trends of the time, The Hellgame approaches combat as often incidental to the goals that lead to victory. In that respect, even with the multiple currencies and variable powers and occasional challenge of figuring out an area control strategy in a set of concentric rings, The Hellgame is a wargame that is highlighted by its overall mechanics, rather than the details of how units kill each other. 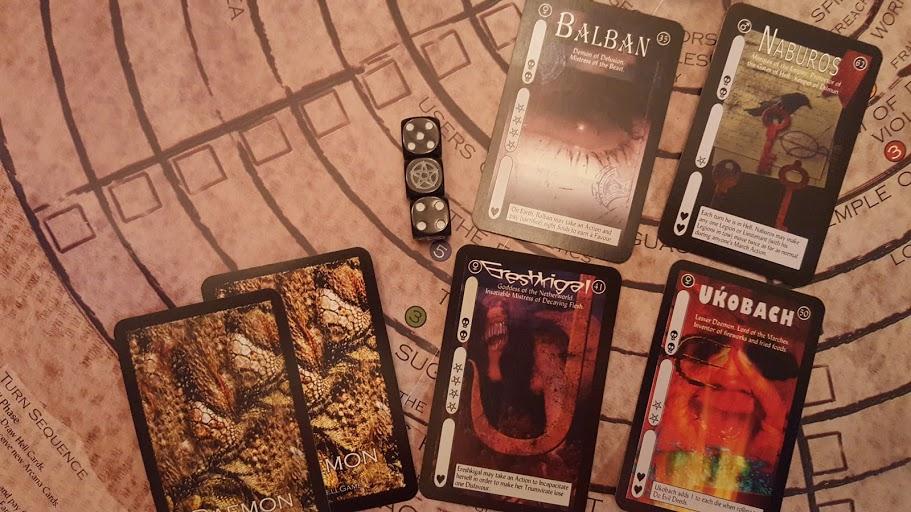 Furthermore, the game still embraced some of the prevalent trends of the time in card play, given that the Arcana cards (the base and most numerous of cards in play) can be used for multiple functions; either the specific and unique spell listed on each card or a more basic function like Walk the Earth (generally, the only way demons can get there to gain Favours.) As with everything else, the Arcana cards do not lack for theme. Who can resist cards like Rotten Sweetness (Gain a Heart of Charisma OR Quinary Pass) or The Armenian Relic Box (Roll against Stars (magic) to Incapacitate a Demon on Earth (If the target rolls a 6 to recover, he keeps this card for sweet revenge) OR Pass) or Hunk (Action or Combat: the Caster may send this meaty Incubus to Incapacitate any female Demon that cannot save itself by rolling against Hearts OR Walk the Earth) or The Thin Dead Line (Combat: For the rest of this combat, the caster may void any hits on his units by paying one Soul per hit before rolling for saves OR Recruit Lieutenant)? The Sectio cards that indicate control of areas on the map are no different (Sea of Lard, Parliament of Intolerance, Lower Dungeon of the Racially Superior, etc.) There's obviously a heavy does of humor that is injected into the grimdark setting and I think that also signals the designers' desire to keep things on a slightly more modern approach than the Gothic surroundings would otherwise entail.

The Hellgame is an interesting excursion into a period that displayed hints of the kind of design development that would overtake much of the gaming world in the next few years, while still retaining the designers' clear intent: to make something thematically shocking, yet highly interesting for those willing to engage with it. If you can find a copy, it's well worth the risk of angering Lucifer...

Discuss this article
Log in to comment
Posts in discussion: From the Depths: Spiraling Down into The Hellgame

jpat replied the topic: #284607 24 Oct 2018 10:50
I assume this is effectively unobtainium at this point, and a quick glance at BGG reinforces that conclusion, but it looks intriguing.

Jackwraith replied the topic: #284613 24 Oct 2018 11:18
I think so. It was relatively rare 12-13 years ago when I snagged a copy and it's only gotten worse. I got mine from a guy in Florida. Looking at BGG, it's EU/UK or nothing if you're offering legal tender. There's a couple dozen up for trade, but that's always a crapshoot.

Shellhead replied the topic: #284616 24 Oct 2018 11:59
I was interested in Hellgame a decade ago, but the prices at BGG were always a little too high. And the reviews indicated that it was a long, complicated, fiddly game. I thought about my local gamers, and eventually realized that I would maybe get one play out of Hellgame before it became a shelf toad.

Jackwraith replied the topic: #284725 25 Oct 2018 20:39
At one point, I got a series of plays in. Over a couple years, we probably played a dozen times or more. But my group changed quite a bit and now it's the kind of game that would almost never come off the shelf. I've kept it, mostly because I always really liked it (even the horrible random events) and I don't think I'll ever part with it.
Read More...