From the Depths: Revolt on Antares 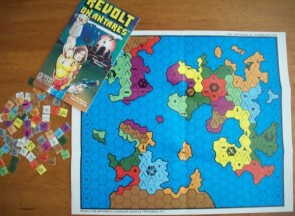 Game Name
Revolt on Antares
Publisher
TSR
There Will Be Games

Looking back at one of TSR's minigames from the early 1980s

In From the Depths, we're going to examine games that are basically lost to current discussion, not just because of the Cult of the New™, but also because they were released a long time ago and/or may not have ever been popular and/or may be a style of game that's either not popular now or never really caught on. I'm hoping to do this as a sporadic series as I pull things from the depths of my game shelves becaues they haven't been played in forever or because I think they might deserve a little notice or might be interesting for those who've never heard of them.

Back in the 80s when, outside of Avalon Hill's devoted followers, the title "board game" typically meant Monopoly or some offering by Parker Brothers, TSR was the dominant force in another form of gaming: role-playing. However, as their presence in the market continued to grow, they decided to expand their offerings and venture into a middle ground between AH and standard boardgames with a brief series of minigames. Released in 1981 and 1982, they kept largely to the sci-fi/fantasy milieu (with the exceptions of Icebergs and Remember the Alamo!) and were typically two-player games that had one method of play. You were one side or the other and you played to achieve one goal or the other. One of the exceptions to those conditions was Revolt on Antares, which not only had two different scenarios for 1v1 play, but also had a multiplayer scenario for up to 4 players.

Similar to most wargames of the time, Revolt is a standard hex-and-counter game, with a map of the alien word of Imhirros (Antares is the star of the system and probably sounded better than "Revolt on Imhirros") split into territories ruled by houses that are either allied to the Terran Empire or rebelling against it (first 2-player scenario); allied to the Terrans or to their Silakkan adversaries, an alien race of suitably bug-eyed and tentacled xenomorphs bent on destroying the human incursion into their space (2nd 2-player scenario); or simply competing to be the greatest noble house on the planet (the multiplayer scenario.) The basic units among the houses all carry similar stats (all units have two numbers: combat power and movement), while the Terran and Silakkan forces are either more powerful versions or new units entirely (Terran airjets.) 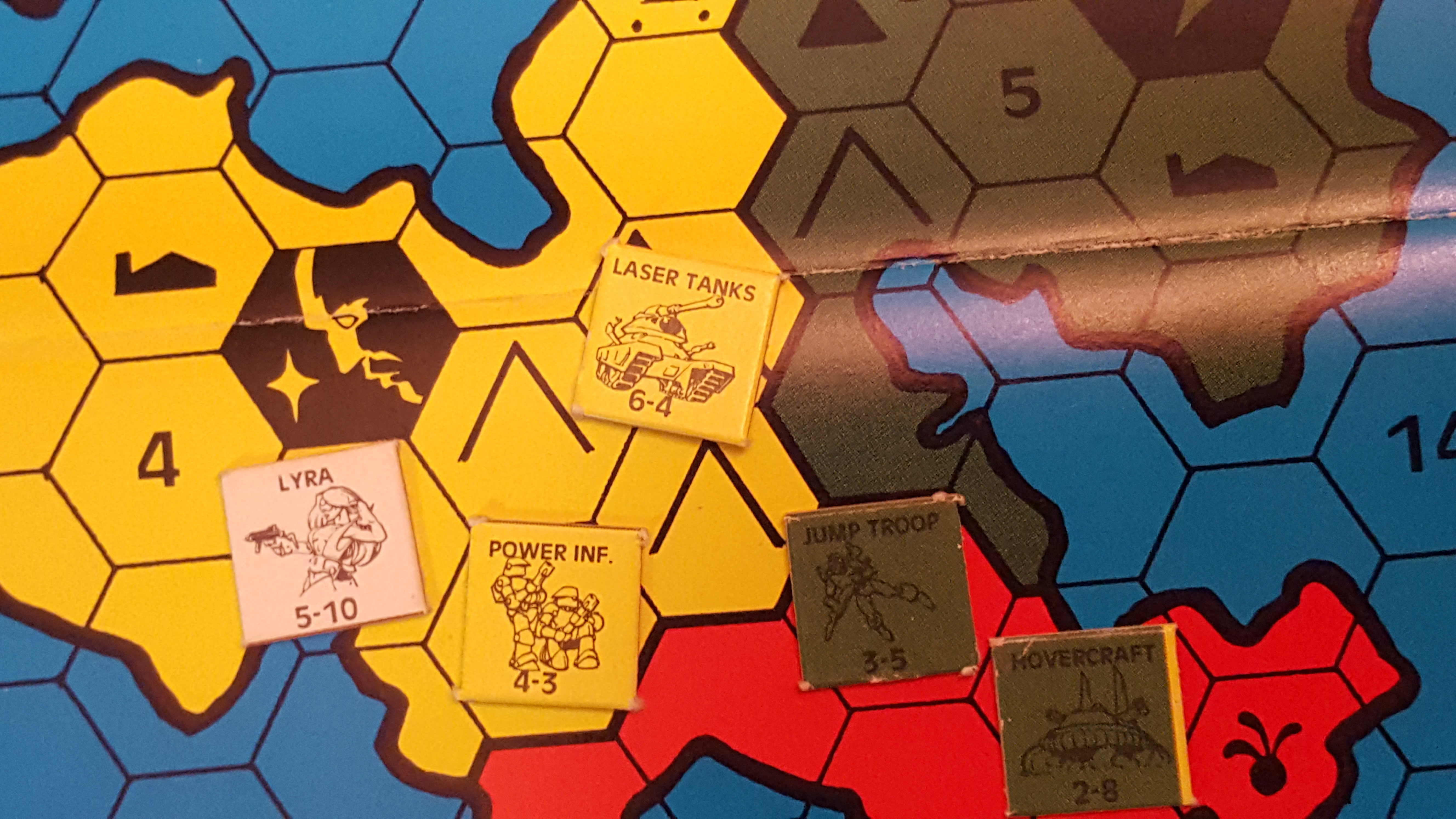 Variety in game play comes from a number of factors: In true Cosmic Encounter fashion, the leader of each noble house has a different psychic power, ranging from the purely combative of Simon Fitzgerald (+1 in combat to all units in his stack) to the oblique of Anton Sessedi (recruits Heroes on a 1-2, instead of just a 1.) Also, the seven alien Artifacts are distributed randomly among the houses each game and intergalactic Heroes are randomly recruited by each side/faction, as well. So it's possible for each game to tell a story, which I've always considered to be the essential element of theme-driven/"Ameritrash"-style games. Who can forget the time when Barracuda Kinrabe and his rebels recruited Dr. Death to lead his forces on the eastern continent, while his ally, "Mad" Catherine Braganza and the intergalactic assassin, Corvus Andromeda (the iconic figure on the rulebook cover), used the awesome power of the Sonic Imploder to win a crucial fight against the Imperials in the west? That's a game that you could be talking about a few months later and Revolt was one of the few among the minigame series that carried that kind of storytelling weight, which is part of why I thought it was the best of them.

But there were a couple innovative concepts and some mild drawbacks in the actual gameplay, as well. Among the drawbacks is combat, which is brutally simple: Attacker and defender add up their combat strengths and then roll a d6. Highest score wins and the loser removes units with strength equal to the difference. If you can't equal it, you exceed it to pay the cost of defeat. But house leaders and heroes involved also fight a separate leader combat, which is just a die roll. It's possible to win the regular combat but lose leader combat and vice-versa. However, leaders have a 1 in 3 chance of being killed or being wounded to come back to the game later or simply escaping which, again, provides for some relief from the simplicity and more storytelling depth in the average game.

In the forward thinking department, all the games are turn-limited. This is a minigame intended to be relatively quick. Even with a game as tactically dense as this one, you have to move quickly because you only have 10 turns to throw off the Imperial yoke/crush the rebellion or 8 turns to be the master of Imhirros. Rather than setting up a stalemate in a game that's supposed to last 45 minutes or so, the turn limit and the bloodiness of the combat keep the game flowing. Also, as the map is supposed to represent a globe, units moving off one side of the map appear on the other, with the hexes conveniently numbered so that's it's easy to match them. This is unlike most other games of this size or even larger ones, which dictate that units can either not move off the map or are lost if they do so. Mobility is emphasized in this game, too. One of the key advantages of the Terran player is the presence of their airjets, which have both the highest movement rate in the game (10) and are also one of two types of unit that can pass over enemy units and can also attack them while moving. Having the low combat but high movement hovercraft to transport units across water can be key, while one of my favorite house leaders, Black Dougal Mackenzie, has the power to teleport one Mackenzie house unit (including himself) anywhere on the map on his turn. It's clear that the concepts of mobile warfare were central to the design of the game and that also provides some depth to the combat, since winning will often be a question of which units are able to reach the combat, rather than simply being the strongest. 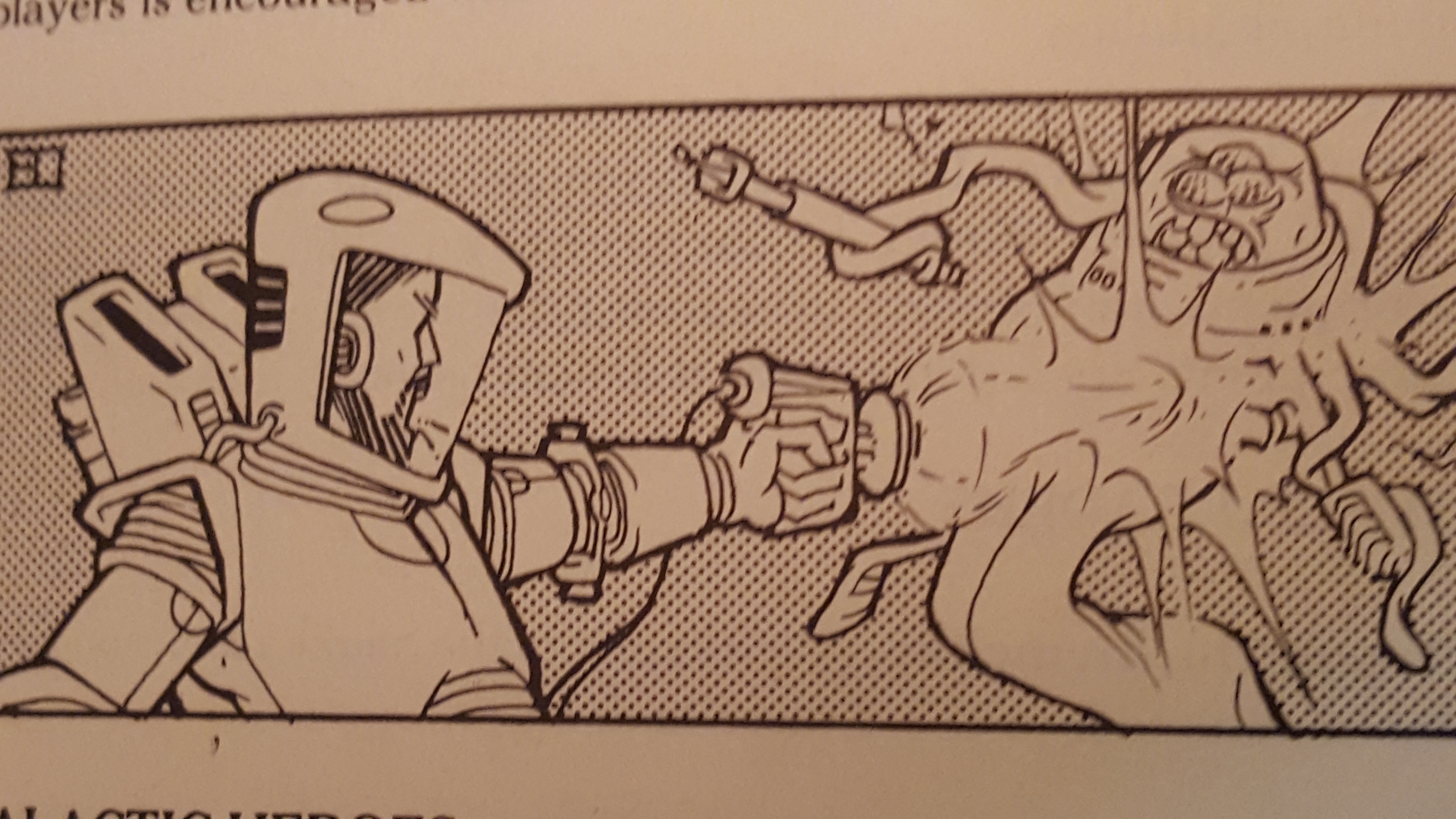 On the cultural side, it's also not difficult to draw historical impressions from the fact that the natives of the planet Imhirros, who named it, are allied to the colonial rulers, the Terrans, by default... until the other non-humans get involved in the second scenario and they become the allies of the Silakkans by default. They don't even show up in the third scenario's contest between the houses. It's pretty easy to imagine Mirrhos and his people thinking to themselves: "Let these people who stole our land destroy each other and then we'll step in and reclaim what's ours." For those of you into artistic nostalgia, the art for the game was supplied by Jeff Dee and Bill Willingham of Villains and Vigilantes fame, as well as Erol Otus, most famous among the early TSR regulars for his contributions to dungeon modules and the original rulebooks for Dungeons and Dragons, like the Monster Manual.

It's not hard to draw a straight line from forgotten minigames like Revolt right up through to modern 4X classics like Twilight Imperium, with its distinct powers for the various races and random tech from an ancient power being used to fight a modern war. In contrast, it's easy to see that line traced back to Avalon Hill classics like Dune. I think the best thing about Revolt on Antares is that you can fight a world-spanning sci-fi war in less than an hour and still have a good story to tell when it's over. If you can find a copy out in the wilds of Ebay, it's worth the cost and effort. Or you can come convince me to take mine off the shelf, where it's been sitting for some time.

Jackwraith replied the topic: #282943 10 Oct 2018 12:39
Thanks! Still having technical difficulties with a couple pictures, which is part of why I brought up the art by Dee, Willingham, and Otus. Will get that corrected.

Drewcula, next up will be The Hellgame, then I might veer back to a minigame or two (was thinking about Metagaming's Holy War, since it's the earliest game I can think of trying to represent 3-D space in 2-D format (paper.))

I think the IP was an amalgamation of several different common sci-fi approaches.

boothwah wrote: I owned this game! 11 year old me loved it. Not as much as Dungeon, but what beats Dungeon? Wow, what a blast from the past.

u don't send me flowers anymore

engineer Al replied the topic: #282966 10 Oct 2018 21:29
Wow! I remember this game. Haven't even thought about it in years, but at the time it was wonderfully unusual and fun. Thanks for bringing back the memories!

Jackwraith wrote: Thanks! Still having technical difficulties with a couple pictures, which is part of why I brought up the art by Dee, Willingham, and Otus. Will get that corrected.

Drewcula, next up will be The Hellgame, then I might veer back to a minigame or two (was thinking about Metagaming's Holy War, since it's the earliest game I can think of trying to represent 3-D space in 2-D format (paper.))

I think the IP was an amalgamation of several different common sci-fi approaches.

Starforce from 1974 had a really cool 3d map with simultaneous movement plotting, along with a really out there sci fi premise and take on space combat

Jackwraith replied the topic: #283000 11 Oct 2018 23:53
OK. Finally got the pics sorted, FWIW, including one that shows off the skills of the legendary Erol Otus, whom I was convinced, as a kid, couldn't possibly be a real person with that name.

The King in Yellow replied the topic: #283669 20 Oct 2018 21:40
I remember when I realized that I could load the Force Cannon artifact onto a hovercraft, and have it swooping around crushing shit. That was a game-changer among my preteen group.
This may have been TSR's best minigame. Vampyre and They've Invaded Pleasantville were definitely close seconds that scratched a different kind of itch. I still have fond memories of my best friend whooping my ass as the aliens in Pleasantville, gradually taking over my townsfolk and proclaiming in a monotone voice, "YOU ARE NOW ONE OF US."

Jackwraith replied the topic: #283670 20 Oct 2018 22:16
Yes! I have pretty fond memories of Pleasantville for the same reason. When the film, Pleasantville, came out, I went around telling everyone about this "cool game from the 80s." They had no clue.
Read More...