From the Depths: Supremacy 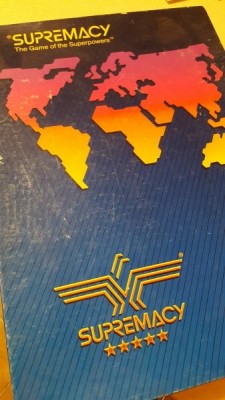 What was the next generation in globe-spanning, six hour wargames, Supremacy is rarely remembered.

Wargames that take whole days to play had always been the province of Avalon Hill in modern boardgaming and the vast majority of those were oriented around wars of the past, from classics like 1776 to epics like Third Reich. The vast majority of them were also two-player games and based on AH's typical hex-and-counter system. So when Supremacy emerged in 1984, it was something like a great leap forward, not only to a game that eschewed hexes and cardboard counters (all of Supremacy's pieces are rather brightly-colored plastic) but also one that was firmly grounded in the present. Supremacy is a game about modern warfare, employing both what was present-day technology in the form of nuclear weapons, but also technology that was still somewhat out of reach, represented by laser-armed defense satellites or L-stars. In some ways, the game was prescient, not only about the ways in which technology would be utilized, but in the way that the Cold War would eventually come to an end. For that matter, the overall design of the game could almost be seen as prescient to today's Kickstarter-driven publishing culture.

Make no mistake: Supremacy is a wargame. It is very much driven by wargame rules and imperatives. The surest path to victory is conquering your opponent, denying them resources, and stretching your empire and its attendant armies to every corner of the map. However, while very much based on direct combat, whether conventional (armies and navies) or strategic (nukes and L-stars.), Supremacy was also very modern in another respect, in that the market and manipulation of the overall economy in the game is not only crucial to proper conduct of any warfare, but also a main path to victory.

And that aspect is key to Supremacy's design. Despite the fact that it is a wargame, the objective doesn't necessarily involve war. It's about domination of (supremacy over) the globe, whether that be through outright combat, manipulation of the market, or technology. All of the combat takes place on a theater-wide format. If you're attacking the US, you're not just approaching California. You're attacking the entire western third of the nation. If you're diving into Europe, you're not just hitting Spain. You're hitting "Iberia". Each superpower is 4-6 territories. This is how abstracted the geography is, because that's how abstracted the combat is. The soul of the game generally isn't tactical considerations based on terrain or units, but rather strategic considerations based on moves that impact the whole world and the whole game. As I noted about its real-world predictive aspects, I won far more games of Supremacy by ruining other players with market manipulations (and the occasional judiciously-targeted invasion/tactical strike) than I did with all-out warfare; just like the Cold War, in the end. Supremacy could also be completed with no winners because of players using too many nuclear weapons and bringing about the fabled nuclear winter. Thankfully, that wasn't within the scope of its predictive powers... 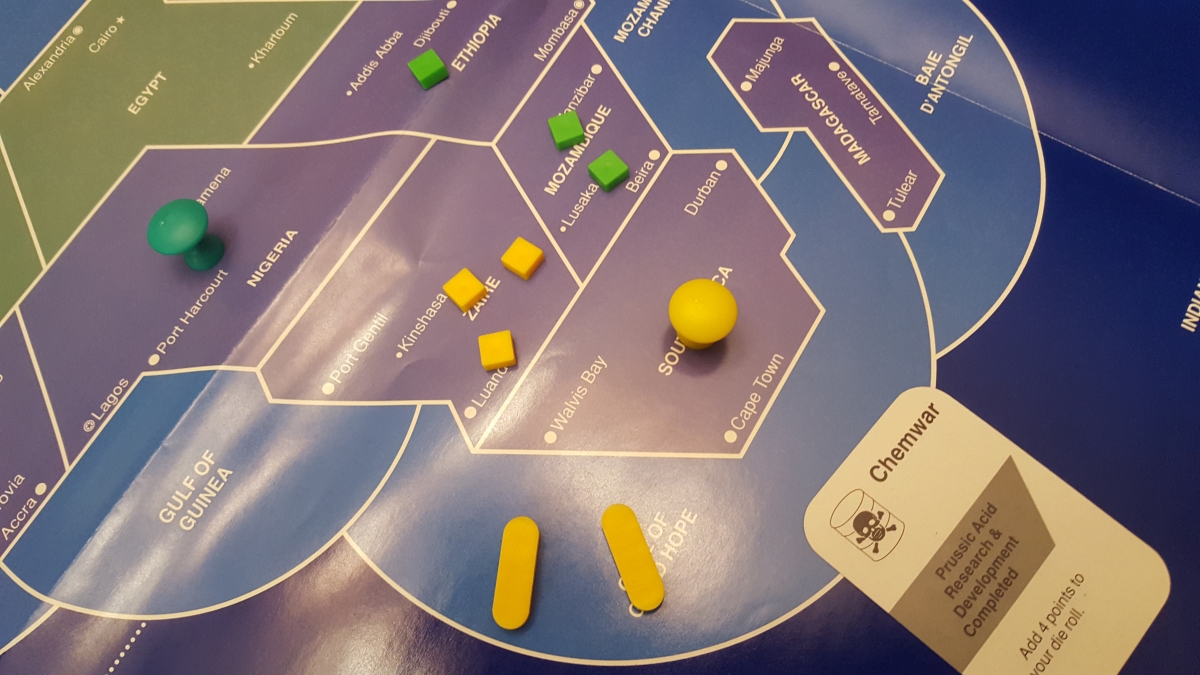 One thing that was, however, was the modern age of boardgame expansions. Back in the day, unless you were playing Advanced Squad Leader or another of Avalon Hill's "system" games, a board game was a board game. You bought it as a complete package and played it as is. Supremacy and Talisman were the two games I remember emerging on the shelf simultaneously with their multiple expansions. Supremacy was a fine game by itself, but it was clearly designed with space for more. Want to assassinate your opponents' leaders and sabotage their grain companies or pull out chemical, biological, and even environmental weapons? There's an expansion for that. Want to transform your L-stars into killer satellites to sweep the atmosphere of opponents' defenses or develop neutron bombs to wipe out their armies but leave resources for the plundering? There's an expansion for that. Want to engage in worldwide sub-launched missile warfare? There's an expansion for that. These are all in addition to the now-typical additions of more players, neutral forces that have to be overcome, and so on. Of all of them (14), the one that struck me as being almost essential to get the most from the game was the Fortuna deck, which introduced random events to the otherwise often tit-for-tat exchange between players across the board. Fortuna could send the market spiraling in unexpected directions, which directly impacted not only the players' bottom lines, but whether they could embark upon a path of conquest.

Long before the current time of detailed miniatures and stylized artwork, Supremacy was clearly a product of the electronic, neon, business-like 80s. While the day-glo colors of both board and components provide some visual interest, most components are represented by basic discs, cubes, and oblongs. It also comes with paper money, in a nod back to the Parker Brothers days of yore. The one exception is the mushroom clouds used to indicate the locations of nuclear strikes; black in the base game, in player colors if they're neutron bombs (and, thus, cleanable; hi tech!) Something tells me that bright orange or pink mushroom clouds were not exactly what would've conveyed the idea of becoming Death, Destroyer of Worlds, but there you go. 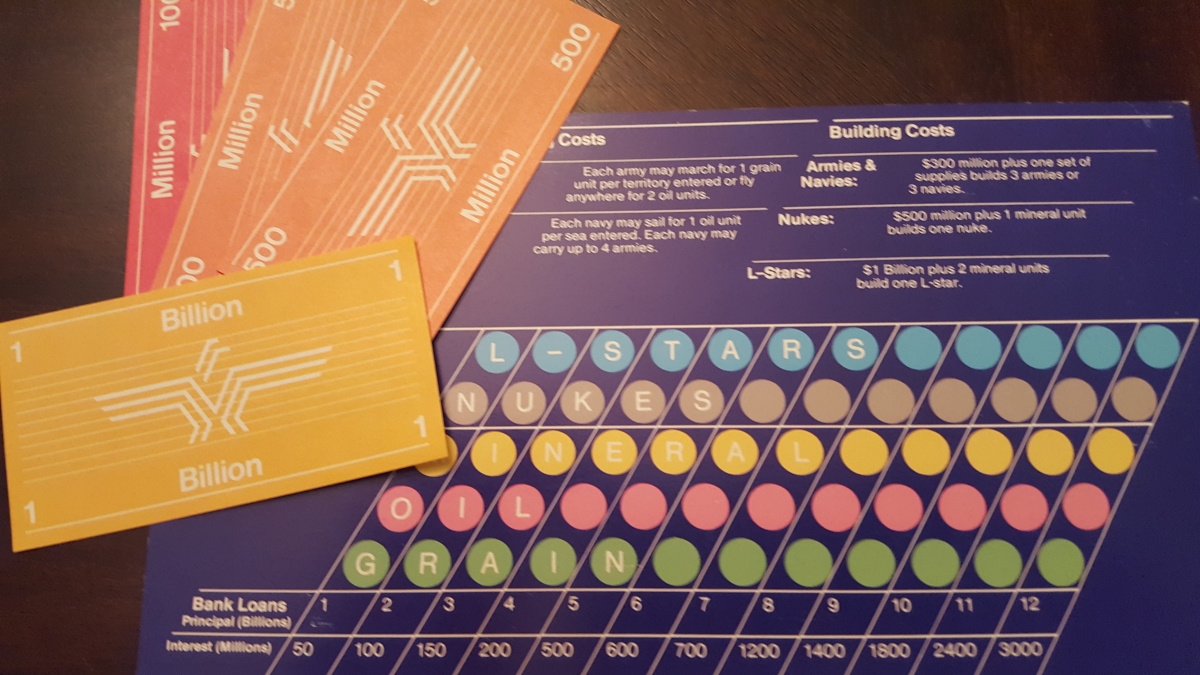 One interesting question is whether Supremacy is a game that shows its age, not only because it's 35 years behind the times in terms of design and mechanics, but also because it straddles the halfway point between an historical simulation, like any game about World War II, and what was clearly a forward glance at how warfare would continue to develop and persist. The overall design was clearly a "big picture" approach the whole way, in that despite introducing a lot of abstraction to a world conquest game, adding in enough expansions could produce a significant, occasionally overwhelming, level of detail. Rather than simply throwing piles of dudes and dice at each other, like Risk, Supremacy could allow for fairly intricate plans and their associated maneuvers. But having said all of that, Supremacy never reached the level of "classic"; assuming people have heard of it at all. Given the level of expense associated with playing the "complete" game, it wouldn't be surprising if cost was a factor that held it back. 14 expansions cost 4x what the original game did. The frequent ease of achieving that nuclear winter stalemate may also have contributed to a lot of "samey" games, leading regular players to question whether another round was worth it. Nevertheless, if you're interested in a design that hearkens back to an early 80s viewpoint on world politics, Supremacy (and the Fortuna deck) might be worth your time. Or come over and play mine, which hasn't seen the light of day since the Berlin Wall fell. 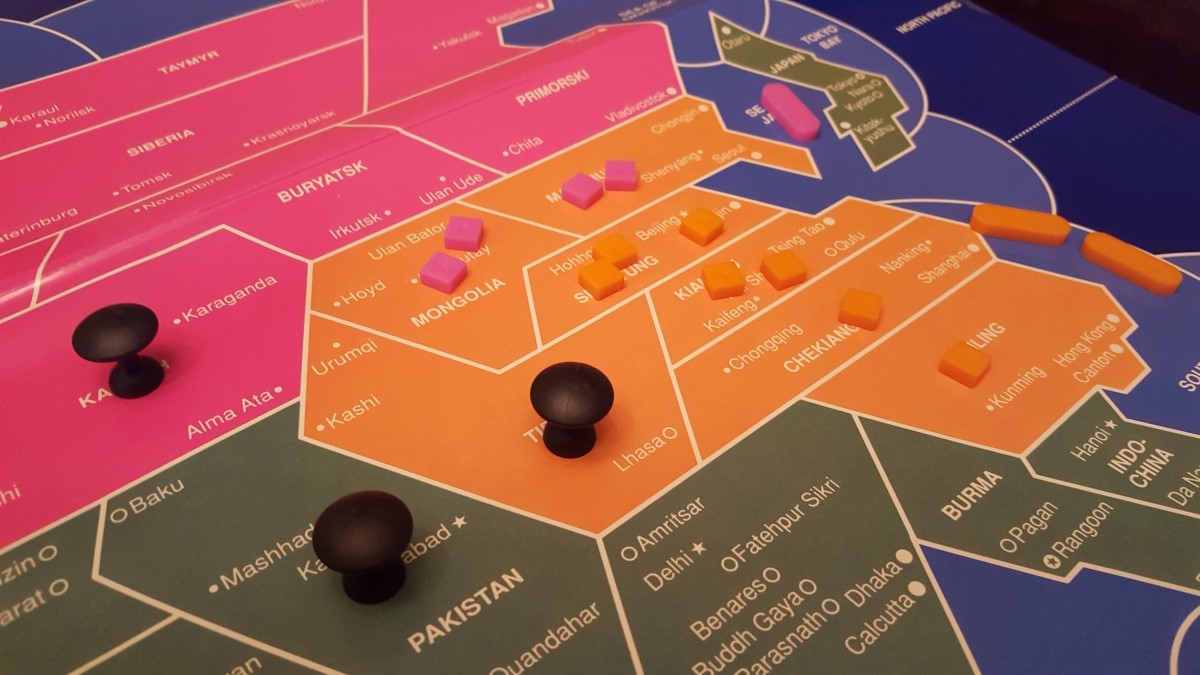 DWTripp replied the topic: #290021 15 Jan 2019 06:06
Now you've done it. Awakened the dormant Supremacy Virus. That means making the 30 mile trek to the storage unit, sorting through several score of boxes, pulling out my dusty copy, finding 4 or 5 other gamers with a day to waste, re-reading the rules, explaining the rules, pouring the whiskey, and fondling the black mushroom clouds menacingly throughout the game.

Good write up for an excellent USSR era game.

Jackwraith replied the topic: #290029 15 Jan 2019 08:30
Thanks! Yeah, that was always the challenge. Who else do I know that would like to spend an entire day immersed in modern geopolitics? We used to play Warlords and Warlords 2 simultaneously with Supremacy, so that people had something to do during downtime (i.e. two other players skirmishing across all of West Africa or something like that.)

Jackwraith replied the topic: #290042 15 Jan 2019 12:24
I think it has its cachet. It's very clearly an 80s production, when a lot of things at the time attempted that really clean design in an attempt to look modern/futuristic/computerized. There's not a lot of detail that clouds the imagery, which is fine for clarity. It just always feels to me as if I'm playing on a prototype of something that will later have terrain and other detail added. I actually took the pics on the giant map expansion, which has a bit more detail and a higher number of territories than the regular board, but still uses the same motif.

I have been chasing the game for a number of years, but the price point is much too high. I'm also not certain the gameplay will live up to the nostalgia.

jason10mm replied the topic: #290071 15 Jan 2019 21:28
This was a constant presence in high school (I had the privilege of going to a boarding school) in the early 90's. I recently scored a copy for nostalgic purposes but the expansions were way out of my budget.

But really, given the simplistic designs, this seems like an easy self made game if you have some wood shop skills or access to a 3D printer. I'm kinda surprised it hasn't been kickstarted but I suppose the rights are a mess.

I've come across this before, though I don't know anything, really, about the revision (and it's out of stock at this point).

I also have some fond memories of Supremacy classic, which I believe I came across (and bought from) a hobby place about 60 miles away that my friends and I would sometimes make a trek to. I remember the market being wonky, but it could be that we weren't doing it right either; there wasn't much template for this game in our experience.

Alas, as fun as I remember it being, it is definitely the kind of game no one really plays these days

RobertB replied the topic: #291566 05 Feb 2019 16:59
In a confluence of this, KonMari, and game prices, I just saw a copy of Supremacy + all expansions for sale for $500. And this wasn't found new in shrink; this stuff has been played. Like someone said in those threads (take a bow if you'd like), you'd have to hope the other players would be included in the game.
Read More...