Braving the Tomb of Annihilation 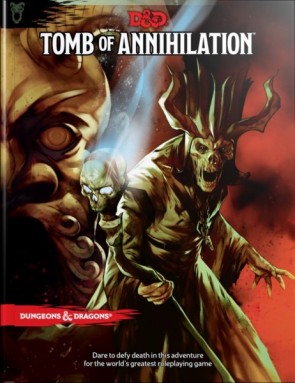 Game Name
Tomb of Annihilation
Publisher
Wizards of the Coast
There Will Be Games
A D&D adventure for people who like slogging through jungles and wearing mosquito repellent. It's better than it sounds. When getting into Dungeons & Dragons, nothing is more intimidating for a new player that the prospect of being the dungeon master. To be sure, it's a lot of work and places a lot of demands on the player in question. There are maps to create, items to look up, encounters to build, and worlds to build. If you're a father of two with a full-time job, the obvious answer is to go with a published adventure. At least that was my logic when I made the choice to run Tomb of Annihilation with my group. Originally released in the fall of 2016, Tomb of Annihilation has already gotten its due as a very good module. But reading a book and actually running it are two different matters. So as a kind-of new DM, my experiences with this module have been positive enough that I wanted to highlight some of the great design work Wizards of the Coast did on this adventure.

Superficially the setup for Tomb of Annihilation sounds a lot like Tomb of Horrors, the punishing adventure from the first edition of AD&D, written by none other than Gary Gygax. Acererak the Lich has created a mega-dungeon designed to kill adventurers real good. That's basically all there is to Tomb of Horrors, but Tomb of Annihilation places that action on the region of Chult. Chult the jungle region of the Forgotten Realms, and the largely unexplored continent borrow liberally from African cultures. It's nice to have a setting that is a lot less WASPy than the other D&D adventures, and the Chultan setting is a huge part of what appealed to me. The combination of jungles with undead creatures allows for some fun bestiary choices. Most of the animals native to Chult are found nowhere else, and the monsters found in both places have a nicely Chultan flair. I especially like the Goblins who attack by stacking on top of each other and attacking as a unit.

The other major plot element is that of a Death Curse, an evil affliction on the entire world that originates in Chult. This curse causes characters who have been brought back to life to begin to waste away and eventually die permanently. That also that resurrection spells don't work in this adventure, which should in theory put a lot of pressure on the players. It's kind of a callback to the deadlier past editions of D&D, but in practice it's a little clumsy. The truth is that player death is not super common in 5e, and so if you want to keep the urgency of the Death Curse front and center it will take some plot moves by the DM to give it some teeth. In my games I've found that relying on the module to provide that urgency on its own was not ultimately the way to go.

Well, that's perhaps not very fair. One big element of the game as written is the hexcrawl. The players are presented early on with an enormous map of Chult, and it is up to them to explore it and find the lost city that houses the titular tomb. This requires a lot of resource managment that will not be to every group's taste. I know that I am way too lazy as a DM to fuss with rolling for weather and random encounters for every hex, and some (most?) players will probably not be interested with making sure they have enough insect repellent to get through the entire jungle. If you were to follow this to the letter, the jungle would be quite deadly indeed. There are lots of undead creatures and weird tropical diseases to contract. For my part, I eventually started telling the travels in montage, simply because it allowed us to experience more of the module without transitioning between big areas.

And you'll want to experience as much of it as you can, because there are a lot of really entertaining locations in Chult. I wouldn't want to spoil the fun for potential players, but suffice to say that the resolutions to many of these locations allows for lots of solutions besides simply killing your way out. You might be tasked with impersonating a fertility goddess, or scaling a spire of stone that extends hundreds of feet into the sky. These more unconventional locations are sprinkled in with others that could be slotted into just about any adventure. While I wasn't able to take my players through everything on the map, the stuff I missed will work nicely in other adventures with minimal fuss. There's also plenty of room for the more creative DMs to populate the map with their own stuff. And all of this culminates in the final tomb, a dungeon-crawl that has some diabolical traps and some truly unconventional solutions. Of course its also loaded with undead creatures and hideous monsters, so there's something for everyone.

I'm not really in a position to compare Tomb of Annihilation to the other published modules released so far, because I've done my best to keep myself unspoiled on those should I end up playing at some point. The lone exception is Lost Mind of Phandelver, from the Starter Set, and that is a much better choice for both new DMs and new players. But for whatever it's worth our experience with this adventure has been extremely positive. It's not hard for the DM to make every session feel really distinct and varied. There can be a long journey through the jungle one day, an attack against the Flaming Fist the next, or a tangle with a giant zombie t-rex the next. Not only that, but the setting is fleshed out to such an extent that it's not too hard to go down a rabbit trail and find some weird adventures for the characters to experience. The back half of the adventure comes into focus with the ruined city and the final dungeon, but it still manages to provide lots of variety.

Dungeon-mastering will always be rather intimidating, but Tomb of Annihilation is the kind of adventure that gets me excited to make it to every session. The setting, encounter design, and variety of locations make for a solid adventure that, and it's been a great fit for my group. The jungles of Chult are treacherous, deadly, and a lot of fun as well.
There Will Be Games

san il defanso replied the topic: #290777 28 Jan 2019 01:43
Poor word choice, the point is that there's a broadly northern European vibe to most Forgotten Realms settings. My impression of the times they've broken through that mold it's been a little cliche. I believe they've had Asian and Middle-Eastern flavored settings, but my impression was that they were a bit questionable in their sensitivity.

Basically, I think the Chult setting does a good job at feeling new and exotic without being tasteless or offensive. As a 30-something white guy, my ability to comment on that is pretty limited, but that's what I think anyway.

By Thor’s hammer, I think it’s an okay descriptor. He’s three quarters of the way there... White - Anglo - Saxon.

Thanks for the write-up!

san il defanso replied the topic: #290786 28 Jan 2019 09:42
The book is divided into five parts, and that's pretty on point. They aren't all equally sized though. The second part, which is the jungles of Chult, is probably the longest stretch. It's not tedious, but the DM does have to guide it a little toward a conclusion. After the characters have found the lost city, it's a matter of discovering its secrets and eventually finding the dungeon. The last three parts are all in there, but it makes sense with the flow of the adventures and the advancement of the characters.

I'm not quite done with my group, we're probably about six sessions away. The final mega-dungeon might end up being longer,

It might also be good to say that I'm a quick leveler. I don't track XP and just basically give a new level roughly every other session. Other groups might have a slower pace if they like to level slower. The book itself says it's from levels 1-11, however long that'll take you.