From the Depths: Britannia 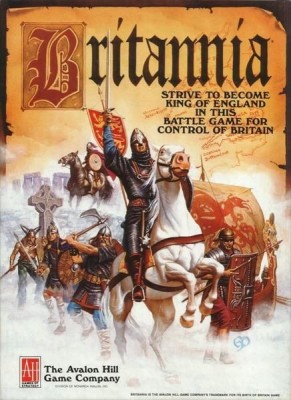 A slow-moving wargame that's often as much history lesson as game experience.

I've been trying to get away from what seem to be outdated terms in our modern board gaming sphere. Those are things like "Euros" and "Ameritrash"; the latter of which was one of the founding ideologies of this website. As game design has become more interwoven, the idea that something must be identified as solely one type or the other has generally fallen away. Is Blood Rage a wargame or a worker placement game?, for example. One of those old terms is "grognard", often used to both identify a particular type of hex-and-counter wargame and fans of that type of game. If you liked playing Avalon Hill's output, you were a fan of grognards and a grognard yourself. But what if you liked other types of games? Could you be a grognard and play Settlers? Or Talisman?

An Avalon Hill game that I still have sitting on the shelf, despite it not seeing much airtime, is one of those that could be considered an early "crossover" of various types of games but, as an AH product and a hex-and-counter system, is typically lined up with the rest of their output as a grognard. That game is Britannia, a depiction of the history of the largest of the British Isles from the Roman invasion in the 1st century CE to the Norman invasion of 1066. Each player takes a collection of peoples that moved in and out of the island over the millennium and tries to gain points by simulating the historical experiences of all of them, with each turn representing roughly 80 years. You score points by getting your respective peoples in position to duplicate their historical path or perhaps more. I was always fond of trying to get the Picts to stay alive into the Middle Ages. (Plus, playing blue, I got the exciting Norman hammer blow in the last turn. With ponies.) 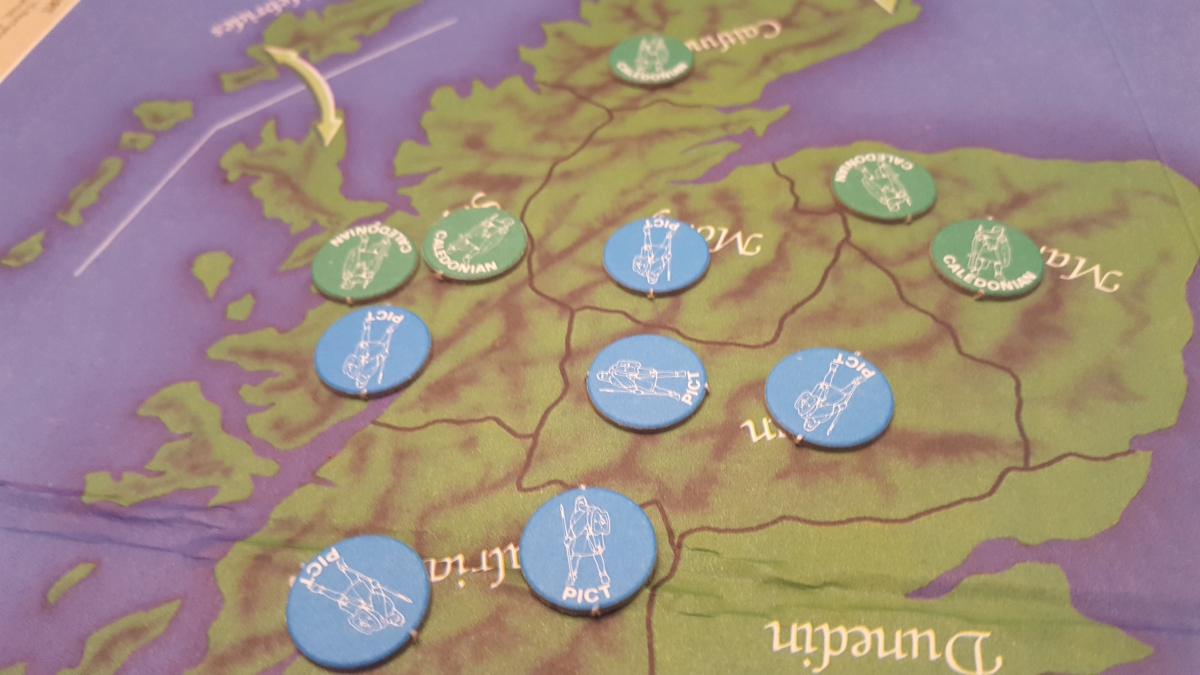 Strange as it may seem, I've used Britannia as kind of an intro to serious board gaming with a couple people over the years. Like much of Avalon Hill's catalog, it's a fairly slow-paced game and there aren't really any instances of surprise or events that might give people a poor experience because they couldn't absorb both new rules and a sudden change in fortune. It also uses basic ideas that a lot of classic games, like Chess and Go, provide; like thinking a couple turns ahead to anticipate not only what you'll be doing, but also what your opponents will do. Since much of the game is pre-programmed (new peoples enter on turn X, etc.), new players will have a better grasp about how to set themselves up for these changes in circumstances. These are concepts that later games, such as Small World, also used to good effect, since knowing that your pieces already in play will be fading out or departing gives one a good idea for how to form a strategy that assists your new pieces when they arrive alongside the enemy.

Also, in a departure for Avalon Hill (AH), there are few minutiae-ridden rules that have to be considered about this or that unit in this or that circumstance. Other than Roman forts and the cavalry employed by a couple factions, all units are the same, without numbers or unit insignia that have to be memorized or understood at a glance. The Belgae are just like the Saxons; just separated by a few hundred years and with the latter being far more numerous. The ease of absorption also allows it to function as one of the best history lessons that AH ever produced. How many people know that the Angles and the Saxons were Germanic tribes who emigrated to England from the continent? Likewise, how many people know that the Scots actually came from Ireland? Or know who the Picts were (other than the target of one of Conan the Barbarian's favorite oaths: "Well, I'll be a Pict!")? You can see some of the later turns of the game playing out in front of you on the History Channel, as the Northmen raids become all-out invasions and then settlements (the Danelaw.) 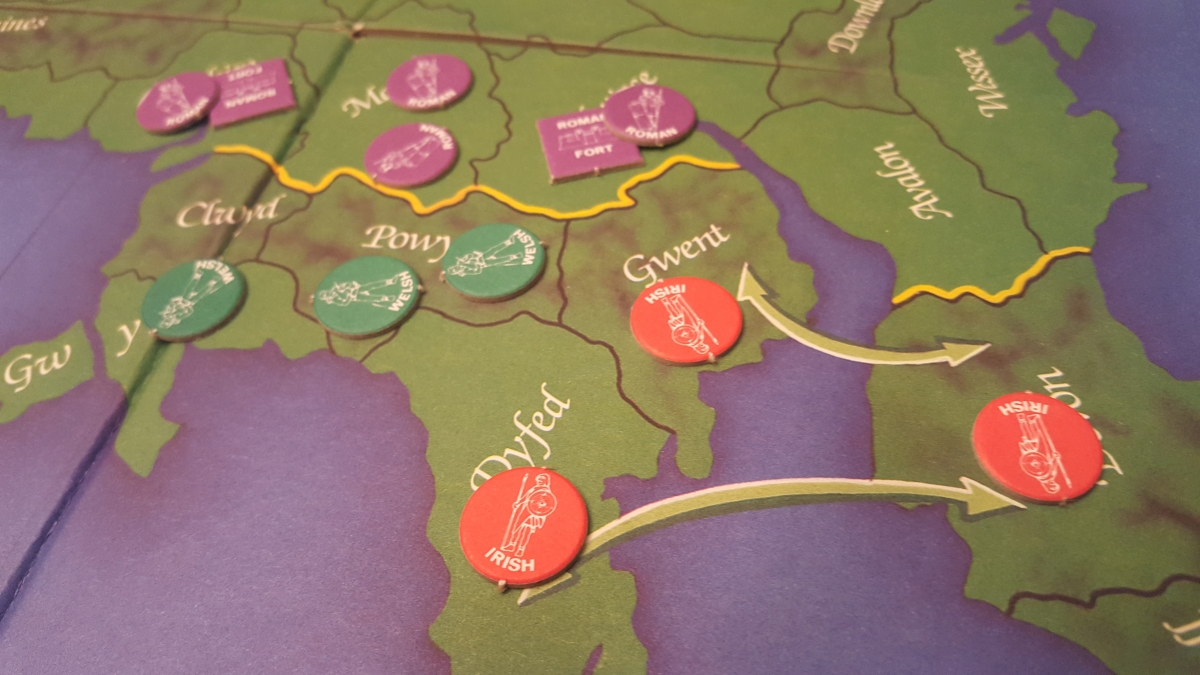 I think the ease of play and the relatively straightforward nature of the rules and setting were what led Fantasy Flight Games (FFG) to do a re-release a few years back. I've never played that version, despite rumored rules updates that smoothed out some sticky areas, because mine still works fine with the plain, old cardboard counters and less modern artwork. It's not a game that I would toss in front of anyone and suggest that they sit down for a few hours, because it's still a heavier game than some of its comparisons; like Small World. But if you have friends that are interested in history or genealogy or just finding out who the Jutes and Brigantes are, Britannia is a solid choice.

Sagrilarus replied the topic: #293715 12 Mar 2019 14:52
Britannia is a great choice for a long session, and almost guaranteed to spawn some serious discussion during the play, historic, strategic, and otherwise. This is a game you schedule to have a dinner break in the middle of. Kids, this title is from the time when games were manly things. You'd step away to split firewood, do an oil change or sire children on other peoples' turns.

I'll mention that Britannia is the best known of a whole family of games with a similar running gear. I used to own Maharajah, which lets you dive into Indian history instead of British, if you're looking for a change of pace. (The British make a late appearance of course.)

Jackwraith replied the topic: #293717 12 Mar 2019 15:17
Oh, wow. I totally forgot about Maharajah. I loved that game because, again, it taught me things about Indian history that I was clueless about. Now I should trade for a copy...

Jackwraith replied the topic: #293725 12 Mar 2019 22:43
Hm. That's a thought, but I think it would be a major redesign of the game. In all honesty, it's not that complex. It just takes some thinking and there are a lot of pieces involved at any given moment. Trying to stretch it out over several sessions might turn a slow-paced game into tedium. It might be feasible if there were a way to represent smaller action within the 80-year turns, like we used to do with our combo BFG/Epic/40K games, where we'd basically drill down from one scale to the next. But that, again, would mean adding a ton of detail.

Count Orlok wrote: I played the FFG release once many years ago and remember enjoying it. It was long, however.

lewpuls@gmail.com replied the topic: #293746 13 Mar 2019 10:45
The FFG version is considerably better, in most players' opinion. I used that second edition as an opportunity to fix some misunderstandings that crept into the first, and to add such things as Roman roads, Boudicca's rebellion, and Saxon burhs.

A reissue of the FFG edition using plastic figures will be out within a year from PSC Games (UK). It will include in the same box a two player Duel Britannia, using a different board and lasting 65-75 minutes. This will both help people learn the system of the big game, and provide an alternative to those who prefer much shorter games. The game is in late playtesting.

I've also developed a much shorter four player game with a new board, "Conquer Britannia", which has been played in as little as 84 minutes.

Within the year there should also be an electronic version of the FFG game available from a French company.

Providing we all live long enough, of course!