Letters from Sag -- Kingsburg at the May Getaway 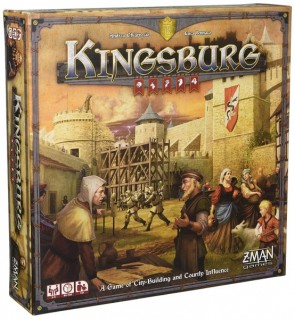 Greeting ladies and gents, this is the first report from the 2019 May Getaway to Dewey Beach.  Each year 15 buddies and I rent a beach house in the off-season and spend three days and four nights playing games, focusing on the big games.  For today’s installment I’ll review the first of three games I got in on day one, with a brief review of how it played out in our particular session.

Three games in an entire day you say?  Yes, my game count isn’t remarkably high, but there’s good reason for that.  The May Getaway is about enjoyment, not sprinting, and time was spent digging into bigger, more deluxe games that we can’t generally knock out in our evening sessions.  And given the positively glorious weather time was spent sitting on the porch of the beach house, enjoying the very short Spring that the Mid-Atlantic offers.  But enough of that.  Let’s get down to our first title.

Kingsburg is a fine euro with more than its share of luck involved, a throwback to when games were German-born and built to be played in a family setting.  Though there’s certainly opportunities to exert influence on your fate the luck of more than a few die rolls is going to play its part, and you need to approach the game with an appropriate amount of jest.  But – I have unshakable proof that strategy and cunning are key to success in it.  More on that in a moment.

Kingsburg is a game where you roll three dice and then assign them either together as a group of three, separately as singletons, or as one group of two and one on its own to numbered spaces on the board.  There are options for every number from one through eighteen, and each provides more reward as the numbers climb.  Most spaces provide material to build things with, and as you build more you get new options for where you can place your dice and options to increase your score or otherwise excel at the game.  The entire package is wrapped in a generic medieval theme, and the art and workmanship carry it well.  This isn’t a brain-burner, more of a game that gets you talking and snacking and generally discussing the gripping issues of the day.  The game is engaging and entertaining, but it doesn’t overwhelm the group dynamic and it’s social in its nature.  I recommend it.

Kingsburg was unavailable for purchase for years, and the copy I played on today was homemade.  Indeed it was a scanned and printed copy of the first edition, with more than a bit of liberties taken with the overall look and feel of the package.  The edge of the board was sealed with black duct tape (tastefully done of course) and the blocks representing stone had a dot in the center of each, an artifact of a prior life in another game.  My buddy Wayne is colorblind so it’s not uncommon for him to take a sharpie to various game components to help him discern the pieces more easily.  But in spite of its origins the homebrew version played every bit as well as any other, and Wayne had wanted the game during the time it was unavailable.  He wasn’t going to pay $120 for it, so he printed and taped and painted, and put his own package together for a fraction of that.  It had zero impact on our enjoyment of the title, a game I very much like to visit with every six months or so.

Which is odd, because I am truly awful at this game.  I mentioned above that I had proof that there’s legit strategies to Kingsburg’s play and it’s simply this – I don’t know what those strategies are, and clearly my buddies do.  I generally come in DFL and am happy if my score token is within earshot of the eventual winner.  That didn’t happen today and hasn’t happened much of ever, so clearly a bad patch of luck is not my problem.  I have yet to finish first with 10 plays under my belt.  There are ways to win this game in spite of the dreaded die rolls, a refreshing title that combines luck and skill into a great overall package.  There’s an expansion, but it detracts.  The base game is a fine addition to your play rotation, one in the historic German Tradition.

Discuss this article
Log in to comment
Posts in discussion: Letters from Sag -- Kingsburg at the May Getaway

RobertB replied the topic: #296632 06 May 2019 15:55
Played it a few times when it came out. It was big in the Euro crowd. For me, it was too long for what I got out of it. These days I play Stone Age if I want to play a relatively complicated (note: relatively) Euro dice game.

I'm glad to hear that there are other people who can only get in three game sin a day. I Spent all day at a meet-up a couple of weekends back, and only managed to play two games, because I spent most of the day socializing with friends. And I didn't even have a nice porch to sit on. Same thing happens to me at WBC. I know people who will play more games in a day than I will play in a full week.

Shellhead replied the topic: #296639 06 May 2019 16:21
I've heard that Kingsburg is a good game, but I generally loathe euros, and this one looks like a brown cross between a spreadsheet and a yearbook. Hard pass.

DarthJoJo replied the topic: #296643 06 May 2019 16:57
I’ve enjoyed the two games of (the much more colorful Fantasy Flight first edition) Kingsburg I played but own the Lovecraft Kingsburg Festival reimplementation. On paper I like some of the changes like a branching upgrade system that offers greater flexibility and madness that creates some risk for anyone who consistently high rolls.

Unfortunately the production is a disaster. The artwork is much moodier and evocative than the straight kaiju interpretations that Fantasy Flight prefers but is dark to the point of incomprehensible. The board parts are also so disproportionately large for tiles that need to hold at most three dice that I could barely fit everything and players on a regular folding table.

Haven’t played it enough yet to decide which I prefer, but I’m glad to hear you could return to it.

As for KIngsburg, it is a game I like more than I should. It is strangely calming and enjoyable. We recently acquired the Lovecraft version which is pretty cool despite the somewhat baffling production choices. Unfortunately, it NEVER hits the table.

Sagrilarus replied the topic: #296747 07 May 2019 22:50
I agree, Kingsburg is a game that has a relaxing tempo to it. You can carry on a normal conversation as you play. Grab a couple of brew-dogs and don't worry about playing too quickly.

Starcraft followed shortly after, where my brain had to focus on doing things in reverse order. That's a game that presses to be the center of attention.

As far as I'm concerned these mini-cons with 10 or 20 people are the heart and soul of the boardgaming scene, and if more players went to one they'd realize it. The big cons are nice because you get to meet with the same group of friends every year, but they're more expensive, and frankly I'd wager the core group you meet there could fit in one of these vacation houses we rent. With this 10-20 group you can pretty much play whatever you want, and there's always someone looking to get something onto the table.

Wednesday night through Sunday morning cost me $125, including food, drink and lodging. Really a killer deal, especially if you're on a budget.
Read More...