Letters from Sag -- Starcraft at the May Getaway

Game Name
StarCraft: The Board Game
Publisher
Fantasy Flight Games
Designer
There Will Be Games

Starcraft is based on the setting of the videogame with the same name, and hearkens back to when Fantasy Flight made larger-than-life games.  Starcraft is dudes on a map dialed up to ten; a knife fight between six guys in a closet.  The board is designed to be cramped, and with a full boat of players makes for very quick contention over very limited resources.  As with Kingsburg before it, we played Starcraft straight up, no expansion in the mix.  Unlike Kingsburg, the expansion has a reputation for being a must-have, largely because it clears up some ambiguity in the rules of the original.  But the expansion was not available and, well, this is why we drive to Delaware once a year.  Our Starcraft experience was six hours in the making: set up, complete rules review, first-turn struggle, solid action, dinner break (eaten at the game table as we discussed the play so far and concluded that, yeah, maybe even us devout non-sleevers should probably sleeve the cards in this one, because not so much as one additional copy of the game will ever be printed again.  The game ended shortly after the beef stroganoff did, a shared win for me and my buddy Kevin.  The Marines prevailed!  Hoo-rah! 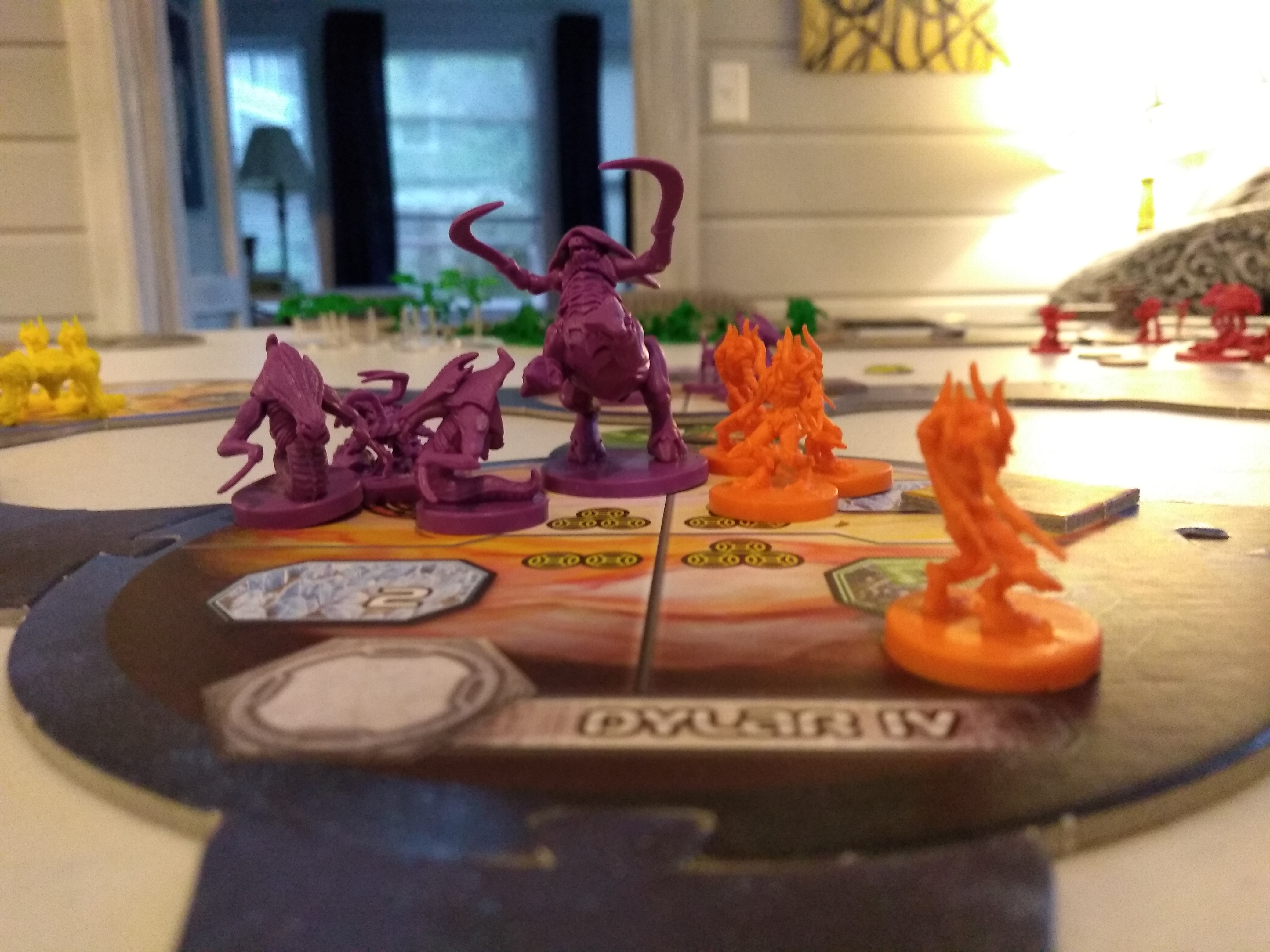 So before you sit down to this title, you gotta ask yourself if six hours is something you’re interested in.  My last play of this title was 2013 (also at the May Getaway), so it’s not like I can claim to be a devoted fan of it.  But damn, it’s a good play; the kind that leaves a lasting memory.  In spite of the interim years, I still could dig much of the rules out of my brain’s cold storage, so clearly it left an impression back then.  Today’s play will as well, as my home planet was ground zero, the location three armies deemed must-have for victory, and I was neck-deep in the middle of the action.  Combat is a relatively quick affair carried out with cards instead of dice (not my favorite), but with a twist.  As you grow in power over time, you add new capabilities to your deck of combat cards; the first time deck-building appeared in hobby games.  Credit where credit is due, because Starcraft uses a main-feature mechanic in a supporting role and it works very nicely with the bigger parts around it.  This is a more well-rounded game from a mechanical perspective and it feels bigger for it.  The way you deploy and order your troops forces you to not only manage execution orders within a turn but also across multiple turns, as you need to lay the groundwork in order to move, and that groundwork tips off your opponents.  You need to lay red herrings on the board or risk revealing your entire game plan with plenty of time for them to adjust.  So there’s a lot of things to keep track of, some of which don’t need to be kept track of!  At times, you find yourself wishing your pieces luck, hoping you got all the prep work done correctly for them.

Though battered and beaten (combat is going to happen every turn in this game), I managed to hold favored ground and drag down two armies that would have surely gone after my partner.  He nabbed the win from behind them while they exhausted themselves banging heads with me. 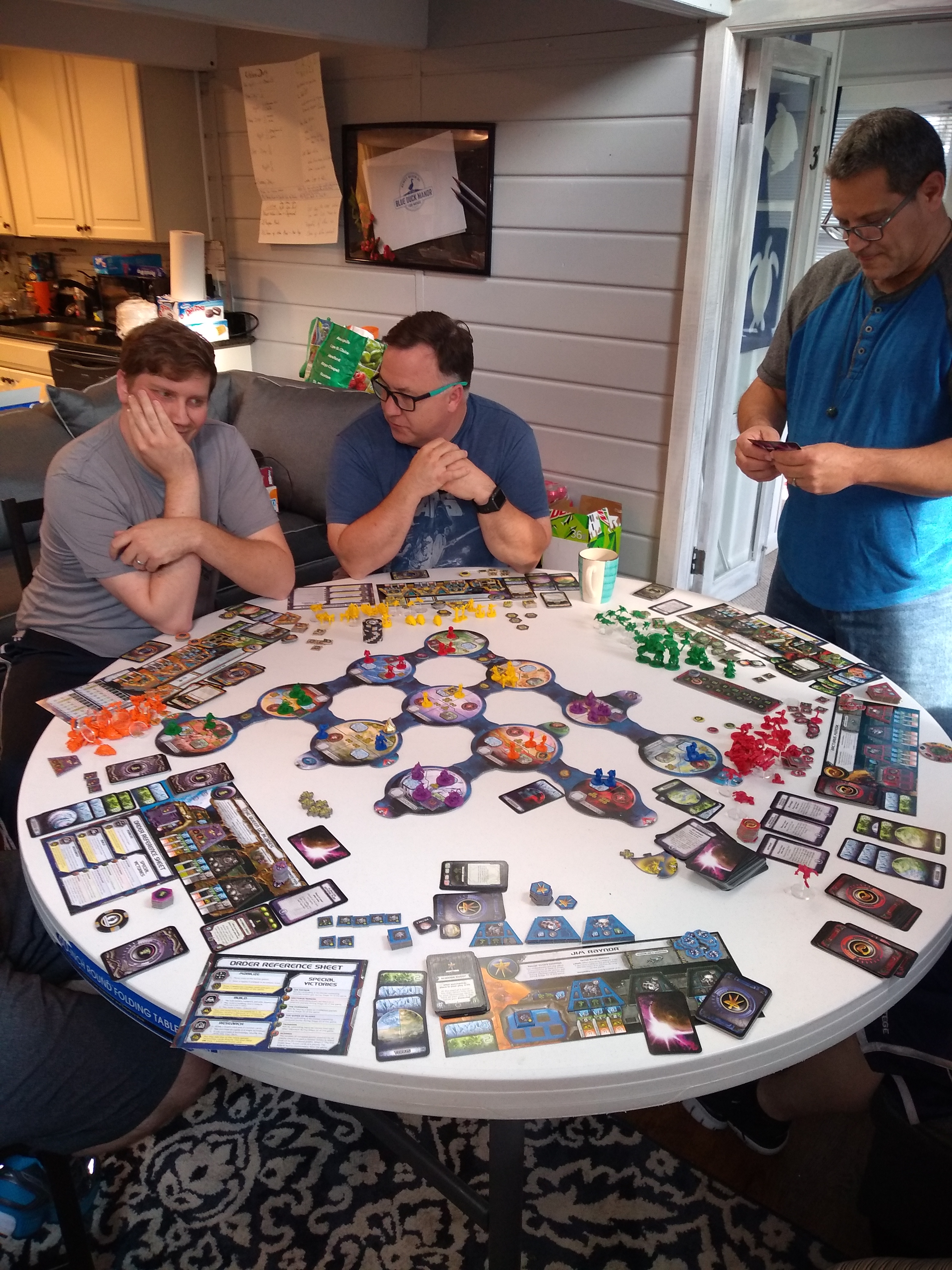 If you stumble across this critter, and if you have an entire afternoon that you’re willing to devote to just one game (gasp!), you should go for it.  It will kill your gameplay count but it comes with some serious bragging rights.  I recommend the full William Tecumseh Sherman treatment for Starcraft – five-o’clock shadow, whiskey and a cigar.  War is hell, but on occasion it is also very entertaining.

Discuss this article
Log in to comment
Posts in discussion: Letters from Sag -- Starcraft at the May Getaway

Vysetron replied the topic: #297157 16 May 2019 10:38
Thanks for putting this together. I would love to give this game a shot or at least have a reskinned version see the light of day.

EDIT: I forgot that Forbidden Stars was a reimplementation! Not sure how similar they are, and now that's largely gone too. Maybe the design is cursed.

I dig a lot of the stuff from this era of FFG's catalog. Big, ambitious games like this just don't seem to be of interest to publishers these days. I can think of plenty of reasons as to why, but that's not really relevant to Starcraft.

Gary Sax replied the topic: #297168 16 May 2019 11:32
I have this and the expansion and have played it once but refuse to let it go. Prime toad, not a cold war like TI, great central action mechanism. As mentioned above, this is a great era for FFG games imho despite a lot of criticism about game length and size at the time.

Msample wrote: I got no problem with long games if it’s a good game.

We had a very good time playing it.

Vysetron wrote: Thanks for putting this together. I would love to give this game a shot or at least have a reskinned version see the light of day.

EDIT: I forgot that Forbidden Stars was a reimplementation! Not sure how similar they are, and now that's largely gone too. Maybe the design is cursed.

I dig a lot of the stuff from this era of FFG's catalog. Big, ambitious games like this just don't seem to be of interest to publishers these days. I can think of plenty of reasons as to why, but that's not really relevant to Starcraft.

I'm squarely in the Forbidden Stars isn't quite as good as StarCraft camp. It's still pretty darn good though, and I feel like it is significantly easier to teach.
Read More...