Battue - Storm of the Horse Lords. An Ameritrash Jr. Review 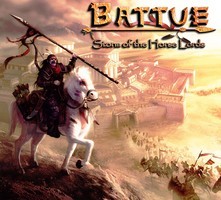 Prophets of the Horse Lords foretell the coming of a leader who will unite the hordes into one great, unconquerable nation! They say when one of their Khans sacks the City of Brass Pillars and sits on the Golden Throne, then all the Horse Lords will band together to unleash a human storm! As the Golden Horse they will triumph over their enemies and rule Terris!

Battue - Storm of the Horse Lords just moved into my top 5 games to suggest when someone asks me to recommend a game for their nephew's 11th birthday. Like Nexus Ops, it's a RISK-like game that plays in about an hour. It is easy enough for tweens to play on their own, while still having enough going on to hold an AT uncle's interest.

Each player is the leader of horde of Horse Lords who seeks to fulfill the prophesy by conquering Tarsos, the City of Brass Pillars. You start the game with a horde of six Horse Lords, and nine reinforcements. Each Horse Lord has a movement of one tile, and a strength of one. Stacking limit is eight. I point this out to illustrate that you are dealing with small numbers here. Maximum of 15 units on the board. Never have to count higher than 8. Uniform units, so you don't have to keep track of different stats. No terrain modifiers. Really couldn't be simpler.

The game board is made up of tiles of various sizes and shapes, each representing a building in the city. Each building has a defense strength, a reward for being captured in the form of a number of "Loot Cards" and a victory point value. Loot Cards typically add reinforcements to your horde, modify combat, or give you out right victory points. The city is constructed by randomly placing the tiles face down on the board.

So you take your horde of six Horse Lords, pick a side of the city and move them all onto an outer tile. Flip the tile and fight. Combat resolution is simple. The defense number of the building plus the roll of 1D6 vs the number of attacking Horse Lords plus attack modifiers from loot cards plus 1D6. Highest total wins. Ties go to the defender. If you win, you get to put one of your Flags on the tile, indicating that you control it, then draw the number of loot cards indicated on the tile. If you lose, you remove one of your Horse Lords, then you have the choice of retreating off the tile to a tile you control, or fighting again. Its fast. It's easy. It's immediate. It's intuitive. There are no charts, no crazy formulas. An eight year old can do the math in her head, and I don't get bored because I'm wasting half the game looking stuff up on a chart or counting and adding stuff up repeatedly.

That is pretty much the game. You advance your horde one building at a time, splitting them up into smaller hordes to attack multiple building on your turn if you wish. After a few turns you will probably start attacking buildings controlled by other players. When attacking a building controlled by another player combat is the same as described above, except the controlling player can play defensive Loot Cards, and any defending Horse Lords on the tile add their strength to the defensive total.

The only other rules are that you can play loot cards marked "Start of Turn" at the start of your turn, and Loot Cards marked "End of Turn" at the end of your turn. The cards are clearly marked with both words and icons, so that bit is a no brainer. Some of the buildings have a special event symbol on them. When you flip those tiles you have to draw an event card and resolve it. Events can be good or bad. Before you move, you can roll for reinforcements. Hordes that have been reinforced can't move or attack that turn.

The Loot Cards have consistent, clear language and icons, so you don't need a rules lawyer to parse them. The rules them self are clear, and the phases of the turn are clearly ordered and described.

This is a game that you can hand to a bright 10 year old and say "Go play."

This is a suitable introduction to conquest and area control games for 8-12 year olds. It is almost entirely tactical. Since the cognitive ability to think strategically doesn't kick in until the typical child is around the age of 12, it doesn't give adults or older children a significant advantage over the younger kids.

Turns are fast, and down time is minimal, so kids don't get cranky and bored when it isn't their turn.

The 30-60 minute play time means kids don't get cranky and bored from sitting still too long, and the game doesn't over stay it's welcome with adults. The one hour play time also fits nicely into that after dinner before bedtime family gaming time slot.

The exploration aspect is fun. The anticipation of flipping the tiles to discover what you get is appealing to kids as well as to adults like me.

The game is beautiful to look at. The Horse Lords and flags are chunky and easy handle. The city tiles are thick and glossy. The artwork on the cards is colorful.

The fact that you can never have more than 15 horse lords on the board, and that all horse lords have the same movement and strength makes this game quite manageable. The limited choices and lack of chrome or economic aspect or just about anything else also makes Battue a good starting point for teaching the basic mechanics of area control and conquest.

No book keeping. Victory points aren't tallies up until the end.

Beat the hell out of having to play Ticket to Ride again.

Player elimination. As adults who love AT, we accept, and even embrace player elimination. Little kids, not so much. Make a check of the maturity level of the kid before playing. If they are the type who will cry when eliminated you might want to change the game end criteria to be "Game ends when the 5 buildings are controlled, or one player gets eliminated."

Fairly generic feel to the game. You somewhat get the feel of warriors on horse back moving through a town, fighting from building to building, due to players starting location and the movement mechanics. However, other than that, the totally stripped down, chromeless aspect of Battue makes it feel pretty generic.

Lather, Rinse Repeat player turns are a bit bland, and could feel tedious to an adult gamer if the game went on past the hour mark.

Since you are conquering building tiles, it feels like you are fighting buildings. It reminds me of that scene from BIG, where they are showing Tom Hanks the robot that transforms into a building and he says something like, "It's a building, what fun is that." This makes the game feel rather bloodless. This could be a plus if you are playing with squeamish kids, but makes the game less exciting for kids who want to kill stuff.

With no book keeping, you never have a good sense of who is in the lead, or where you stand, unless you want to try and track it in your head, or have the patience to count up the constantly shifting victory points each turn. This can be a plus when playing with kids who get cranky and discouraged with every minor set back. However, it also means you lose the drama of the win hanging in the balance on that last die roll.

I would not recommend this game to adult gamers to play with other adults. It is too generic and simple to offer much challenge or excitement. However, that simplicity makes it quite manageable for bright 8-12 year olds to play together, without an adult. And there is enough going on for an adult to enjoy playing Battue with a tween. Finally, it allows adult ATers to cling to the hope that once their kid masters the mechanics of Battue, he or she will want to move on to more complex games, and eventually will become a worthy opponent with whom to play War of the Rings.