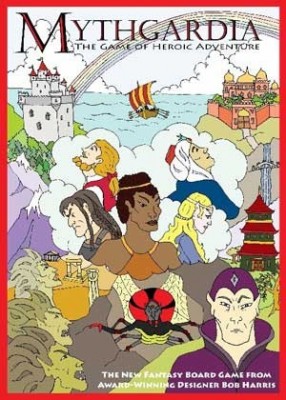 Game Name
Mythgardia
Designer
Robert Harris
There Will Be Games

My copy of Mythgardia arrived today. If you are a fan of Talisman, Return of the Heroes and Tales of the Arabian Nights, and can embrace the randomness of this quest that takes you through the mythology of 5 cultures, you will love Mythgardia. I know that we will be reaching repeatedly for this little gem of an adventure that takes an hour or less to play.

First off the artwork, which had many of you wincing, is actually quite charming. Yes, the map could use some help, but it is clear and functional, which is more than I can say for some game boards. The whimsical images of mermaids, sea monsters, and the ships of several cultures floating in the seas, along with drawings such as a medieval castle in the realm of Albion and a Greek temple in Palladia are enough to give you a sense of place, and a clue as to the adventures you will encounter in each realm. In the far east of Khajistan, you are likely to have to demonstrate your martial arts ability to earn the hospitality of a monestary, while in Nubia you will hopefully have a spear to help you make your way across a river full of crocodiles.

The card art is uneven. At best it has the bold, graphic style of a child's story book. From across the table you can tell who has the rope or the sword in play. At worst it is awkward, some of the human figures in particular. Over all I mostly like it and none of the worst art really bothers me as it tends to be on adventure cards which are quickly discarded.

This is essentially a pick up and deliver game. You roll and move to race to a secret location randomly assigned to you, which allows you to find out to which randomly assigned location a magic crystal has been hidden. Then you race to that location to claim the crystal. Then you race to one of three special locations on the board to deliver the crystal. The first person to deliver three crystals wins.

For movement you roll two dice and use the higher of the two as your maximum movement. You can move less than this if you wish to land on a specific location. Along the way you draw a Legend card at nearly every space you land on.

Legend cards are mostly challenges that require you to make skill checks. Roll low and something unfortunate occurs. Roll high and you are rewarded. Since this is a race game, the worst outcome is losing a turn, while the best outcome is earning an extra move. Having Companions and Items in play may add to your die roll, but they might not. Each Legend mentions specific items and companions. You get to add one to your skill check for each one that you have in play. If you don't have any of them, too bad. More importantly, you have luck points that you can spend to add to your die roll. So you do have some control over the outcome.

Additionally, you have Fate cards, stamina (life points), and money. Being reduced to zero lives will result in missing three turns, which is very, very bad. Fate cards allow you the typical range of benefits, and opponent screwage. Money allows you to hire boats to move quickly across the sea, heal lives, get extra movement, and buy more Fate cards.

Unlike other adventure games, you don't earn items, companions and allies by killing stuff, shopping or stopping at the tavern to hire party members. The entire Item deck is dealt out at the beginning of the game and you immediately put all your items into play. All Companions and Allies are also dealt out and form your hand of cards. To bring these into play you have to stop at their home location. Companions can modify skill checks. Allies allow you to purchase a fate card, lives or an extra move if you land on their home location.

Despite its cheesy back story of wizards and magic crystals, it's an adventure game that is not stuck in the over used cliché fantasy world of Elf, Wizard, Warrior, Dwarf.

Deciding when to spend your limited pool of luck points and how many to spend gives it that little gambling thrill.

There is player interaction through screw-you cards, and the ability to hunt down and challenge other players to steal their crystal or their stuff.

The Spawn will love it.

What will send many people screaming from the room:

Extreme randomness, particularly with regard to pulling locations. I completely shut out the Man due to the fact that I pulled quest locations that were very close to where I was, and the crystals popped up right next door. Not to mention he pulled "Lose all your Companions" while I pulled "Get a big pile of money."

For a more in-depth look at Mythgardia, read Michael Barnes' Review: Ugly Duckling Mythgardia turns out to be a Swan.