Last Night on Earth Brings out the Gamer Gene 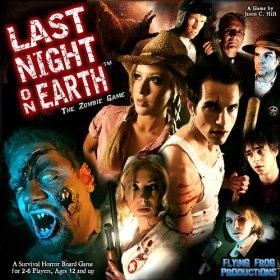 So it’s been a while since two things have happened: One, that I’ve been able to play a lot of one game and two, that it’s been a game I felt passionate about. So these two things finally came together giving me the confidence to splash out some of my thoughts on what I find to be an amazing game for introducing to folks who haven’t tried many games.

I subscribe to the view that “gateway games” don’t exist, but gateway gamers do. I pretty much feel that a lot of folks either have a gaming gene in them or they don't. This isn’t to say that everyone’s always 100% aware of it or likes the same types of games, but as long as someone’s willing and has fun – that’s all you need. So I’d like to praise Last Night on Earth highly for helping bring out and develop the gaming genes in my family members.

Who have I introduced LNoE to?

brother (already gamer) and then to my

my wife (competitive already and gamer though my hobby)

and sister in law (non gamer).

Next it came out to several gaming friends and so far everyone’s loved it.

Then traditional (cards, etc) gaming friends and a young cousin.

You think that’d be enough to convince me, but the next step that really inspired me to write at any length was: my parents.

So the age range I’ve seen is from a 14 year old female to a 60+ year old male and all shades in between with varying levels of gaming experience. Awesome sauce.

So what follows are the biggest reasons I’ve found LNoE to be a great game to bring out the gateway gamers in those I’ve introduced it to:

1. Accessible Theme OR “This makes me want to watch a zombie movie!”

First of all, the idea of the undead coming back to munch on the townsfolk while they scramble to work together against this common threat is pretty primal. Repel the invaders!

On top of that, the recent popularity of zombie media is seen in:

Film - Shaun of the Dead (enough to get my sister in law in), Night of the Living Dead (classic), the more recent remake of Dawn of the Dead, and Resident Evil series

So creeping and crawling into the general public’s eye for a while, zombies are pretty mainstream and for that I am thankful. This gives a solid sense of what’s going on or possible in the game to people who would normally be overwhelmed by so many rules (like my mom):

“Because you rolled a 1. You pretty much just ran out of ammo.”

So someone’s unfamiliar with anything other than the standard fare of games. Well luckily they’re on a team so they’re not alone in anything they do. Usually everyone talks about what the game plan is and what everyone should do that turn. Plus players can see examples of others doing what you can do. These all combine to allow players to focus on what their in game character would do in this situation and not on “remembering every single rule” to feel like they can make a competent move.

“Well, Dad – you don’t have a weapon at all and since you’re trying to kill zombies to win, you’d probably better find a safe place to search for something.”

“You kidding me? I’m heading to the gun store, just like I would if this ever happened in real life”

3. Semi Co-op = Confidence with an edge

But since it’s not like Pandemic where everyone’s working against a game, you have a human face to direct your actions. I find that this helps boost their confidence because they can point to a person they are trying to beat and point to the teammates they have who will help them. Verbalizing the ‘us versus them’ feeling raises confidence as you get cheers from your teammates on a great roll and taunting from a zombie player as he closes in. Do your Pandemic cubes do that?

Win or lose, the heroes always have company.

What I mean here is this: you don’t *need* 4 people to play 4 heroes. With one hero player 4 heroes can be played. This means when my mom gets a phone call, someone else can take her turn (she didn't mind). More importantly, it means that as long as the player is willing to join in and have fun, they don't actually have to know most of the rules or even decide what their hero does. Now I’m not talking about a player who tries intentionally to make illegal moves or is distracted and not caring about the game. But how common is it that a parent wants to enjoy the awesome family time and shared experiences that come with board gaming? My mom wasn't raised playing games, but knows her sons love it and so is willing to put aside a lot of the doubts she has to spend time with us and enjoy our company. LNoE rocks for making this a lot easier for us and for her.

Maybe I should’ve mentioned this at the start, but I’ve only ever played the Die, Zombies Die scenario. And until this last game (with my parents), we’d never even used the advanced cards! So this game has much, much more to offer us and thanks to the points I’ve made above, I know we’ll be up to putting the game through it’s paces and get the most out of the multiple scenarios (including ones on the web!). And all that to enjoy before I get Growing Hunger…