Buffy: "We fight monsters, this is what we do." 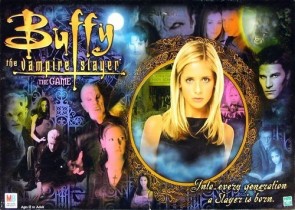 My brother just about swallows his tongue. He sputters, "You wouldn't like it."

Feh! For shame! He says this to a woman who was just about the best Mina Harker I've ever played with. So I have a date to teach the Buffy game to my sister-in-law this summer. The way I get my sister-in-law to play with me is . . . well . . . frankly, I lie like a rug.

Last summer I set up Fury of Dracula. Sis walks in.

I just hand her the Mina mini and say, "Your playing Mina."

She looks bewildered for a moment, but before she can say that she can't play because she is on the way to the Outlet Mall, I tell her, "It's really easy. It's a cooperative game. You play on a team like in Wits and Wagers. Your on the same team as the second best Caylus player in the world. Just do what he tells you until you catch on. The object of the game is to figure out where Dracula is hiding, kind of like you do in Clue. You just move one space per turn and then pick cards, like in Pictionary, except the game is about Dracula. You get to be Mina, the hot chick that Dracula bites."

Sis shrugs and says okay. A couple of turns into the game, she is on her feet telling all the boys to shut up because she has a good card to play, which she did. Half way through the game she wants to know why she has to fetch cards and never gets to fight anything.

I told her that Buffy the Vampire Slayer the Game is like Fury Dracula, but not the hunting part, just the fighting part. It takes place in a city after you have already located the Vampire. You just roll to move. Get next to the Vampire and kick him in the head. Easy. Also the two best hunters are the women, Buffy and Willow, so the boys have to be the ones who run around the board and fetch cards for you. That's when she said she wanted to play.

I won't lie to you all though. Buffy the Vampire Slayer the Game is a compact dungeon crawl that plays in 45 - 90 minutes. It has a fresh, modern feel. There's no geeky elves and orcs, or ugly space marines. The heroes are modern humans, the strongest of which is an attractive, fully clothed young woman with normal sized boobies. This might sound stupid to the guys, but I swear, whenever I try to get female friends to play Runebound with me, they take one look at the female character cards and I get a lecture on exploitation and distorted body image and anorexia and the whole world is going to hell in hand basket because they let 8 year olds wear halter tops to school, and OMG Bratz dolls. And I'm like crap, it's a game. You can use a meeple if it makes you feel better. But it's too late, and we end up playing something with a robber, or obelisks or trains instead.

Where was I? Oh yeah, Buffy-dungeon crawl. The problem that I have with dungeon crawls is that they start out exciting, but about half way through they bog down and become dull and repetitive. Then there is the final excitement at the very end. Buffy has two mechanisms that keeps the game moving and changing. First, at the the beginning of the game four artifact cards are placed at the four corners of the board. One of these will make the forces of Evil obscenely powerful if the Evil player can get it and deliver it to the right character. The other three are also pretty spiffy. The beginning of the game, is therefore, more of a race than a simple slugfest. Get your characters to the artifacts, without getting them killed. By the way, getting killed is something that really happens in this game. Healing is very difficult. And when a character is dead, they are pretty much dead for the rest of the game.

The other interesting bit of the game is the phase chart. Some of the faces of the movement dice have a moon on them. If this symbol is rolled, a token is advanced on a circular path that depicts the various phases of the moon, as well as one sun symbol. If the token is on a New Moon, the Evil player has advantage. If the token is on the sun, vampires can not be outdoors. Any vampires that are caught outside when the sunrises take damage and have to run for cover. Finally, during the full moon, the character's that are werewolves transform and become super powerful and super fast. How strong you are, who's up and who's down can change at any moment.

The result of these two mechanisms, as well as the balances and imbalances between the two sides, results in a game that is more cat and mouse than the average dungeon crawl. It is about maneuvering and timing, rather than running out, guns blazing to meet the opponent head on. It's more like, wait for the right moment. Race in. Bitch slap the enemy and then run like hell. There are always tough choices, and all of them have risks. You constantly feel that you are are on the edge of losing, but that victory is almost within your grasp. Also it is just fun kick vampires in the head, or take a bite out of someone.

Finally, if you enjoy Buffy the Vampire Slayer the TV show, this game captures it's flavor and spirit. It's one of those games that when it is over, you remember the story you created by playing.

This is a copy of an article originally published on the old F:AT blog. Read original comments.