A Brisk Hello To Risk: Halo 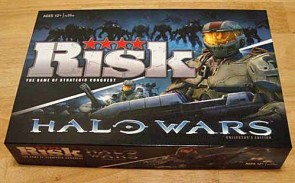 In 2008 the classic Risk board game was released with a revised rule set, which among other changes made the game more goal-oriented and significantly shorter to play. Risk Halo Wars is clearly based on that same revised rule set while adding in its own flavor. That’s right; this is not a simple word-for-word reprint of the revised rules as some have speculated it would be.

Before I go further I want to point out that I never played much Halo due to never owning an XBOX so I’m not overly familiar with that setting. That’s really not an issue here though as the board is very reminiscent of a scrambled world map. It even has exactly the same number of territories as a regular game of Risk. The semi-translucent pieces can also appeal to non-Halo fans as long as you’re into sci-fi themes. I mean we’ve all seen futuristic soldiers, tanks, bases, aliens, etc before and its not as if the back-story matters here. When it comes down to it this is still Risk; a game of territorial conquest not a story-telling game. 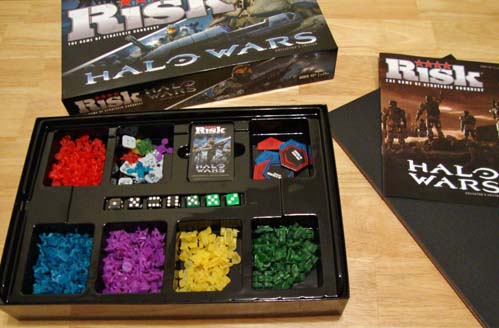 As mentioned above the game of Risk has changed the past few years. While you can do a variant game where the goal is to ultimately control the world, in the basic game you win by being the first to achieve a certain number of objectives. Things like controlling an entire continent or taking over an opponent’s capital. Speaking of capitals, at the beginning of the game you place 15 neutral cities onto the board that make whatever territory they’re in more valuable when troop reinforcements are determined. Each player also places a capital that they must be in control of in order to claim victory in addition to giving another bonus for troop reinforcements. Beyond that you have the standard single unit troops and multi-unit troops, the latter represented by tanks. You also get cards that have one or two skulls on them, which can be traded in for extra troops depending on how many skulls you have in total. Mostly the game plays out like classic Risk with the standard draft troops, attack your neighbors, and then move troops around gameplay. Combat is of course dice-based so anyone averse to a little luck in their games should stop reading now and go pick up a copy of How To Play Chess from their local bookstore. In addition to the standard dice, both attacker and defender can get a bonus die to roll. This is one of several rewards you can attain from completing objectives. And you will want it as combat is front and center of new Risk. There is no turtling in Australia or in this case Mu and you don’t even have to still control a territory after you’ve completed the objective you needed it for. In other words, there’s less defensive posturing and more offensive threatening. Exactly how such a game should be. 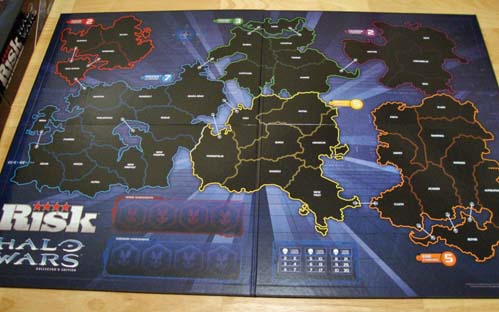 Of course I teased in my first paragraph that this version is different from the basic revised Risk and have yet to follow up on that. So for all of you revised owners I’ll point out the notable differences. The obvious one is the inclusion of a Hero for each player. You place the Hero in one of your territories and it moves with your troops. If you choose to have the Hero participate in attack or defense it gives you a +1 to your highest die roll. However, should you fail any roll the Hero is removed from the board until the end of the turn when its placed back into one of your territories. I think this is nice as like cities and capitals it gives a bit more to think about strategy-wise since you only have a single Hero to use. The less obvious inclusion until you check the rulebook is what I would consider a fourth way to play the game in addition to basic/beginner, command/standard, and world conquest. When playing the game with 4 or 5 players it becomes a team game. This is not a variant, but part of the actual rules. Two players are Covenant and two are USNC and a fifth player would be Flood. Teammates win or lose the game together. They can never attack each other, but they can move through each others territories as long as they don’t end their movement there. They can also transfer command of a territory once per turn. If a territory has a single unit in it they can return that unit to its owner, assuming they agree, and place one of their own there. This helps when trying to claim bonuses based on ownership of an area. Also in team play the number of objectives needed to win is increased from three to four. Unfortunately I haven’t had a chance to play as a team yet since my game nights tend to be three-player, but I do look forward to trying it out. 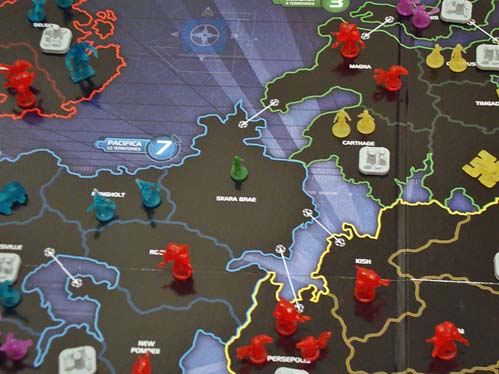 The box cover says this is a Collector’s Edition. I tend to assume nowadays that such things are just marketing talk, but I will give props to USAopoly for producing a better quality game than I expected. In a way it’s like they reproduced the quality that Hasbro used to release before they got cheap about it. The box and board are both thick, the plastic is sturdy and attractive, and the color rulebook is nicely laid out. If I had to gripe about something it’d be the card stock being thinner than I would have liked, but I don’t believe it’ll be a real problem. The cards are also used for randomly placing cities at the start of the game and use the same color-coding as the continents. I appreciated this as it made it a lot faster to find places during setup that otherwise would have had me searching the board because of the uncommon names. How would I know where New Pompeii is? 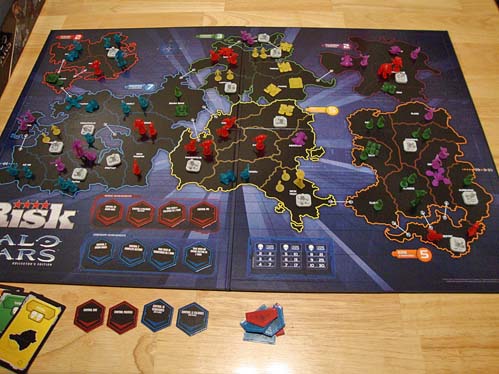 I received my review copy of this game gratis, but if I’d seen it in person before it showed up in the mail I definitely would have purchased it. The only other Risk I currently own is Black Ops and that’s probably hitting eBay soon. Maybe I can fleece one of those suckers who paid hundreds of dollars for that low-grade game which has just been trumped in every way.