I Left My Space Hulk in San Francisco (I Didn't Really) 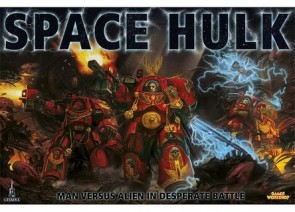 Since I started reviewing board games, there have been only a handful of really momentous events in the world of nerd. One was HeroScape, which wasn't as momentous as it was a big deal to me, because I got really into that game and enjoyed the hell out of it for a long time. Another was Risk: Black Ops, which had the unpredictably cool effect of creating a valuable collectible item out of a game that you could get at Target for twenty bucks.

And then there was Space Hulk.

For those gamers who have been living in caves since the late eighties and subsisting on a diet of slow-moving crickets and government cheese, Space Hulk was one of the great big hits from the early days of serious hobby gaming. The original game was published twenty years ago, and was so much fun that it became one of the most difficult collectible games to obtain without selling a kidney (note to anyone considering kidney sales: the kidney you sell does not necessarily have to be your own).

And then it went away, and you couldn't get it any more. You could hope to find some old version laying around, but good luck with that, because I have wanted one for more than ten years, and still haven't been able to pick it up. Sure, there are copies on eBay, as long as you want to part with a car payment, but there's no game on the planet fun enough for me to drop four hundred dollars (that's not entirely true - I could probably be persuaded to pay that much for a game if it came with a considerable amount of sex. Space Hulk sort of comes with the opposite of that, however, and is therefore not worth that much to me).

And then Gaming Santa Claus decided Christmas should come in September, and just like that, Games Workshop has republished Space Hulk, and in the process, created a mess of hype so deep you'll need a full-body condom to wade through it. So then everyone is asking, 'so, is it worth it?'

This one is easy - hell YES it's worth it. It's worth every freaking penny of the solid C-note I had to drop to have it delivered to my house. It's so much fun, I have lost sleep - not playing it, even, just lying in bed and thinking about how much fun I have been having playing the game.

Let's start with the rules and stuff and get to the jaw-dropping pieces a little later.

Once more, this next part is for those hermits who have only recently come out of their mountain lairs and signed up for internet access. Everyone else pretty much knows how Space HUlk works. You've got a small team of total bad-ass killers - the Terminator Space Marines - and they're loaded for bear. They investigate a giant floating space wreck and find that it is overrun by the nastiest little aliens since, well, Aliens - the genestealers. These beasties can't shoot guns, but they're faster than greased lightning and twice as deadly. What happens next is one of the most exciting bouts of gory violence you'll ever act out on a game board.

The boards are all modular. They sort of puzzle together to make these cramped, claustrophobic corridors that are ideal for a horde of slashing monsters to run through a team of space marines like a razor through a sheet of wet toilet paper. Different missions require different boards, and the space marines seem like they ought to be behind the eight-ball every time.

But they have something the monsters lack - guns. And most importantly, they have a game mechanic that is so excellent that it has virtually redefined tactical squad-based gaming. They have overwatch. They can sit at the end of a long corridor, train their weapon down the tunnel, and open up a can of hot steel whoop-ass so deadly that the clawing freaks get mown down like tall grass. They'll run, the marines will shoot, and the bugs will die.

Well, most of the bugs will die. But there's a seemingly endless supply of the little blue psychopaths, and they can afford to throw their lives away by the bucketload just to overheat the marine guns, wait for the inevitable jam, and then overpower through sheer force.

The balance is fantastic. Sometimes, the marines shouldn't have a prayer - but they can heat up the ol' flame gun and cook a room full of genestealers like a giant bug zapper. They can open up with the autocannon and chew the bad guys into little greasy blood spatters. And should the genestealers get close enough to sample their aftershave, several of the marines are armed with power swords, chainfists and lightning hammers powerful enough to slap the stupid right off those ugly mugs. The real joy of the game is seeing a team of outnumbered marines fight their way through a roiling storm of monsters, losing cohorts as they go, and then pull out a last-minute win at the buzzer.

So the game is fun. I mean, really, really fun. It would be more fun than nearly anything I've played in a long time, even if I were playing it with paper mats and cardboard chits. But I'm not playing with paper mats, and these sure as hell aren't cardboard standup figures. These are the sweetest plastic miniatures I can ever remember seeing in my life. Forget Rackham. These puppies have set the new solid-gold bar.

Every Terminator is in a different pose. They have chains swinging, guns blazing, and swords swinging. And the genestealers are just as varied (though there are two of each model) - they're climbing walls, bursting from the floor, or just scuttling. They're standing on the skulls of the dead, clambering over ruined pipes, or leaping from girders. It'll make you cry, but you know, in a good way. Not like End-of-Ol'-Yeller cry, more like Sox-Take-the-Pennant cry (assuming, of course, that you're a Sox fan).

And the board isn't just pretty. Yeah, the art is fantastic. It really looks like the inside of a battle-torn space station that barely has enough power to maintain a seal. But to turn this up to eleven, they embossed the tiles. It's impossible to describe how much fun it is just to set up the game and look at it on the table.

I can't hype this game enough. I could talk about it for hours on end (and if you ask my co-workers, I've done that too much already), and still not convey how much fun it is to play Space Hulk. I can't imagine ever trading or selling my shiny new copy, especially once I get the figures painted. But here's where Games Workshop shows why we hate them so much - it's been out less than a month, and it's already sold out almost everywhere. Why would GW not make enough for everyone? Because they suck, is why.

So, OK, you can't get a copy unless you go to eBay. But I've seen copies on eBay only a little over what they should be worth, so there's every chance you could pick one up from a scalper. If you do, you won't be sorry. There's a reason I've wanted this for over a decade, and it's the same reason that I'm not disappointed now - Space Hulk is awesome.

Pros:
So beautiful
Edge-of-your-seat tactical battles
Atmosphere so thick you could pour it on your pancakes (which would then taste really gross)
Remarkably balanced despite the huge disparities in team strengths

Cons:
You'll lose sleep over this game
You can't even buy it any more - and it's been out less than a month