Review: Chaos in the Old World 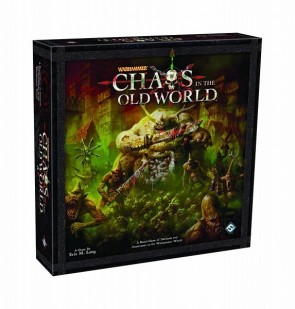 Set in the Warhammer fantasy world, Chaos in the Old World is a game in which players play different "chaos" powers (Khorne, Nurgle, Tzeentch, Slaanesh) competing to dominate, corrupt and ruin the "Old World".

Each power has its own set of plastic figures and its own deck of special cards. Depending on the number of players the game plays in 7 or 8 rounds. Each round has phases during which powers compete for dominance in 9 regions on a map by placing figures and playing cards in these regions. Opposing figures attack each other, and the cards hurt opponents and help the one who played them. Players win victory points by dominating and ruining regions this way. One way for the game to end is for a power to reach at least 50 victory points.

The powers are asymmetrical: they have different strengths and weaknesses, and they require different strategies for victory. Each power has its own dial on the board, and that dial advances according to criteria unique to each power. Each dial advance gives its power victory points or special abilities (upgrades). If a dial reaches its final mark the game ends and that power wins. This is a second way for the game to end.

These two paths to victory create the conditions for very dynamic gameplay and a wide range of strategies. The game builds from beginning to end, so players need to be both reactive and proactive in their planning. Exploiting immediate opportunities is no less important than planning for the endgame. Since the four powers are very different, each has a distinct presence in the game and requires its own style of play and strategy. A strategy that works for one power can ruin another.

I like how the competition between the chaos powers is complicated by conditions in the "Old World". At the same time as the powers are competing against each other, shifting background features of the Old World – the presence of nobles, heroes, peasants, special events – influence the terms of the competition. This adds as much to the theme as it does to the gameplay and to the game variability. The Old World is a silent player who sometimes can be quite active on the board.

I really like how powers can jump around the board with a fair amount of flexibility. There are, to be sure, restrictions on movement. Powers can move only to adjacent regions. Other powers can play cards that make it costly or pointless to enter a region. Khorne directly benefits from fighting powers in the same region. Heroes from the Old World discourage entry into a region by killing off figures belonging to the most threatening chaos power. But despite these and other barriers, the flexibility of jumping around in Chaos in the Old World remains high. It is impossible for a power to isolate itself in a corner for very long. The best thing about this flexibility of movement is that it allows players to scurry all over the map chasing benefits from dominating or ruining regions. Racing for objectives, fleeing from Khorne (or, if you are playing Khorne, catching opponents), trying to hoard regions to oneself – all this maximizes the interaction and intensifies the competition in the game.

As much as I like this flexibility of movement, however, it is also the source of the one thing that I miss in this game. What is missing is much of the tension that is unique to territory conquest games. Movement in Chaos in the Old World has more in common with tile-laying conflict games like Tigris & Euphrates and Neuroshima Hex than it does with wargames I have played. What is missing is the stress of manoeuvre. I hate that stress, but I love it a tad more. Games that have it provide constant weight that bears down on me, but this makes successful manoeuvres (if I can ever pull them off) feel so sweet. The stress of manoeuvre raises the stakes in a game because it forces players to sustain longer periods of tension. In games of Chaos in the Old World the tension comes in shorter waves (mostly during the summoning phase, but also when dice are rolled in battle).

In Chaos in the Old World, the rules are simple, downtime is low, there is much direct conflict and interaction among players, there is a tremendous amount of thematic flavour, and the artwork and components are extremely well done. Players should expect to stumble a few times as they explore the wide range of possibilities in the game. People who can’t handle direct conflict, who don’t like it when others mess with their plans, or who are expecting to find an immediately transparent strategy after reading the rules or playing one or two games, should play something else. But those who enjoy games with high amounts of interaction among asymmetrical powers, fewer constraints in gameplay, and the pressure to harmonize long term strategy with immediate opportunism will probably really enjoy this game.