Cavum - Because Only Plebes Say 'Cave' 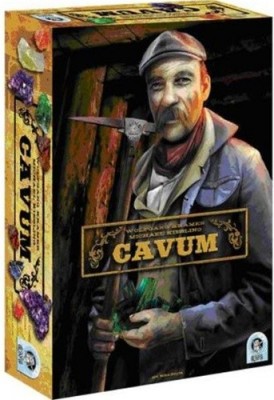 Game Name
Cavum
There Will Be Games

Talk about bucking the system - I'm over here at a site about American-style games, and I'm getting all ready to review a game so European, it has a snooty accent and smokes filterless cigarettes. But it's fun, so what the hell.

Every now and then, I write about a game that I just got in the mail, and I didn't even know it existed until it shows up at my house, and then I go to BoardGameGeek and find lots of people who have even less of a life than I do, and have been playing this tiny niche game since they bought an ugly prerelease copy at a German gaming convention.

I suspect that might be the case with Cavum, though I confess to not having checked yet. I prefer to put off reading other reviews until I finish my own - not because I want to avoid tainting my opinion, but because I can't really be bothered. At first glance through the rules, Cavum looks like a classic heavy-weight Euro snooze fest, the kind the BGG nerds go all loopy over.

And to a degree, that first glance is right. If you're looking for an introductory game to get people into the hobby, this is not it. This would be like trying to teach your teenager to drive by putting him at the helm of a nuclear submarine. I had to read the rules four times and still keep them handy while we played (not sure if that's because they were complicated and tough to follow, or because I'm getting old and stupid). And it's very much a European-style game - you put down tiles to capture resources with limited actions and an abstract board, and nobody dies. So right out of the gate, it can't be a man's game, because there's no body count.

In Cavum, you're all miners in the same mountain. You dig tunnels (but only the ones you have on your tiles) and then you go spelunking for treasure. You fill orders for jewelry vendors and build stations in cities. You have to be able to trace complicated paths through the developing honeycomb, to make sure you can always collect as many precious stones as possible. But you only get a limited number of actions per turn, and unlike most games where you can do the same thing every time, you actually must perform twelve different things. There's an incredible amount of stuff to learn, and a lot happening all the time, so even when it's not your turn, you have to be paying attention.

To really draw the Euro fans, the theme is almost completely abstracted and nonsensical. You get hired by people to get them the gems they need to make one piece of jewelry, then you dig through the mountains furiously, trying to decide where best to place the giant stash of rubies the size of shooter marbles that you evidently carry inside your hat so you can place them wherever you want them. Only you can't just dig tunnels wherever you want, because every turn you have to dig a minimum of one straight tunnel, one T-intersection, one crossroad, and one six-directional hub. Because traditional miners always took the time to dig six different directions, with dead-ends going no place in particular, right? They especially put in that much effort for the money they would make from providing raw materials for a single diamond brooch.

So the rules have the density of carbon steel, and the gameplay reads like it was right out of a Berlin bistro where men in black turtleneck sweaters argue quietly while they sip harsh black coffee. But once you start playing, it all changes. Well, OK, it doesn't change very fast, because new players are going to spend the first turn or so trying to figure out what the hell to do with the dynamite tile. But once everyone knows the rules, this game revs up a lot.

For one thing, all this complication makes for an incredibly deep game. Winning strategies are as important as cautious game play. Plan ahead and build in contingencies. Watch for ways to hose your opponents, because those opportunities abound, and you want to do unto others before they shove a stick of TNT up your ass sideways (which, as I mentioned before, will not kill you).

And there's so much interaction, beyond just using the dynamite to cause irritable bowel syndrome. You can use stations to block opponents from gathering resources. You can stall so that you can place the last stockpile of gems and then be the only one to collect any. You can break up monopolies in cities, screw your opponents out of the stuff they need and otherwise get seriously cutthroat, but in a family-friendly German-board-game kind of way, where instead of saying, 'Ha! I took your capital!' you say, 'well, now, Franz, it appears I have broken your scoring hold over the city, and yet I feel no remorse, just a desire to be condescending so that I can hide being torn apart with internal guilt over my relationship with my mother.'

If you're not a fan of games that require focus and concentration, you'll hate Cavum. Stupid people should not play this game at all, and even smart people may want to decide whether they have the mental stamina to pour into a game. If you're all excited to watch Predator, you're not going to want to sit through Amadeus, even if you moonlight as the New York Times movie critic.

Unless you're a real man, and only play games where people die.

Pros:
Lots of strategic and tactical options
Very little luck
Really deep game
Can appeal to anyone who likes a good game, Euro fan or not

To make up for a sissy review about a Euro game, I'm publishing it here first. Wait until tonight, and you can read it at Drake's Flames (that's actually because I'm lazy. Sorry.)