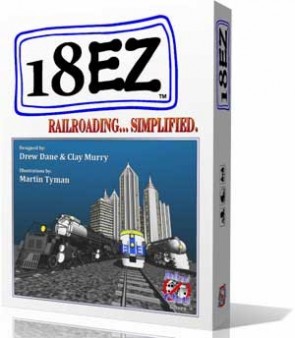 While not Ameritrash, it seems like there has been a fair amount of interest in train games here on F:AT.  Designed by Clay Murry and Drew Dane and self published by Anderw/Clay Games, 18EZ is designed to be an entry game into the wide world of 18XX.  18xx can be fairly intimidating to venture into.  Many of the "beginner" games, such as 18AL, 18GA, and 18FL are either print and play affairs, or published by small design houses such as Deep Though Games.   I think 18EZ is a great way to dip your toe into the ocean of 18xx games.

I was recently able to get 18EZ to the gaming table.  I played with my aunt and uncle. I'd like to take a little time to relate our level of train gamerliness. I think it is important to mention a bit of our background to help set the expectations, and our impressions of the game.

My aunt and uncle both game regularly with me. I'd call them average to serious gamers, but not particularly avid train gamers. My uncle has played 1830 with me once, and my aunt has played Baltimore and Ohio with us (which has similarities to 18xx). I've played about 4 18xx games, and a metric tonne of Winsome train games.

The explanation was easy, all questions were able to be easily clarified with the rules. As the explainer, I found the rules to be clean, and it was easy to go back and find and clarify points. Overall, I thought the rules were quite well done. No one was frustrated by not understanding a rule,  so we were off and gaming quickly.

One minor point of confusion: on page 5: "No route may pass through any city which has all of its spaces for Station Marker tokens filled by other railroad's Station Markers..." - this is irrelevant to level 1 as everyone only has 1 railhead (per page 2 s1.2). This is, no doubt, an important note for future levels, but for someone just sitting down with level 1 it might be a tad confusing.

The game played quite quickly with three. Everyone enjoyed it. We all agreed it was a nice light game by itself, and a very nice introduction into the world of 18xx and to some extent other train games as well.

Level 1 is quite simple, still, the concept of trying to make money off of routes, helping yourself without helping others definitely came into play. I won the game when my aunt connected our routes together which allowed me to use one of her profitable routes. That one connection clearly cost her the game. Lesson learned!

18EZ gives you a taste for the series but does not overwhelm you. I enjoyed my first 18xx game but it was a lot to take in. I thought my aunt hit it on the head, noting that it was "a nice way to do it, start with the easiest instead of not getting it for awhile."

As someone who has played several games of 18xx, I must say, it did a very good at helping to reinforce the gist of the track laying component. It was fun too, to have a teeny taste of a train rush, as well. Just for that whiff of what is to come...

Overall, for three players, one moderately exposed to 18xx and two who have a little exposure to the system, I would say 18EZ went over very well with us. I certainly expect it to hit the table again soon.

We learned Mahjong by playing with bits of rules, and then adding in thing like the Seasons, and the Special hands. This felt very much like that experience to us. Overall, we enjoyed level 1 for what it was, and are eager to move on to the additional levels. I think it makes a lot of sense to ease into a system like 18xx, by becoming proficient with a smaller rule set and adding additional rules in steps.

My aunt is a pretty tough customer on games, and she said as I was leaving that we should play it again soon, at the 1 Level, and then go on to Level 2. That was a pretty good indicator for me, that this game works nicely for introducing 18xx to people.

I think 18EZ did a very fine job of introducing the system to my aunt, and reinforcing game play concepts for my uncle and myself. We are looking forward to level 2, hopefully soon.  If you are interested in taking a foray into the world of 18XX, 18EZ is a nice way to wade in, and test the waters.

Note:  This review appears in a slightly different form at BoardGameGeek