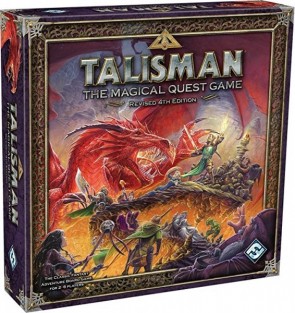 I'm a little surprised at myself that I even played Talisman again. After I played the third edition, I swore I would rather scrub grout than play any version of the game. But then I wound up with a copy of the Black Industries edition, and since so many people insisted that the new one was better, I thought it had to be worth one more try.

They were right - fourth edition is better. But I'm still not sure I would call this a great game.

Several things have changed from third edition to fourth. The most obvious would be the character selection. (Well, maybe not the most obvious - the art in third edition looks like it was created by a pimply 15-year-old who spent all his time drawing skulls all over his mother's photo albums, and the art in fourth edition is brilliant. But I'll get to that.) Instead of a bunch of stock Warhammer characters played with sculpts that were leftover after they made Warhammer Quest, fourth edition has a whole bunch of human characters, just a couple monsters, one elf and one dwarf. Now the characters make a lot more sense, which is nice because I found it questionable that a skaven would be as competitive as a dwarven berserker.

The new special powers also feel like they're good for something, which is another edge the fourth edition has. The prophetess has a great ability where she can have a little control over what she encounters when she draws a card, the minstrel can charm an animal companion, and the sorceress can steal followers from the other players. None of the characters feels as completely useless as a few of the guys in third edition, which is especially good if you're drawing your characters at random.

Fighting stuff hasn't changed, but the stuff you fight has. There are a lot more non-combat encounters in the adventure deck now, which kind of sucks if you're trying to kill stuff so you can get enough power to win the game, but is kind of cool if you just want to wander around a rectangular world and meet weird things. But seriously, this is also an improvement, because some of those nonviolent cards will help you get powered up even better than killing things (although wholesale slaughter is still a viable option).

The end game is completely different. Where third edition has you flipping over cards and throwing away your crap on the way to fight the big bad guy, the new one has a series of difficult encounters that are likely to slow you way down if you're not completely ready. And once you get to the very middle, you don't have a one-round bruhaha for all the marbles - you have to use the crown of command to kill everyone else, and if you roll as badly as I did, this can take a while.

In fact, the end of the game is arguably the best improvement over third edition (unless you count the teen-angst skateboard art). Because you need some time to kill everybody, there's a point in the game where one guy gets close to the front doors of the inner region, and suddenly everyone scrambles to get there, too. It's not like third edition, where the barbarian gets to the middle and two minutes later you're putting away the game. Instead, there's an sudden, intense competition to scramble over each other in a mad attempt to save yourself from oblivion. The guy who gets to the crown first has an edge, but it's not ironclad - in fact, there's every possibility that the first character to the crown still might not win.

But possibly the most important change, in my opinion, is that the game no longer looks like an 80's metal band album cover. The art in this edition is gorgeous and evocative. Where third edition makes you wonder if the art was created by a half-sober tattoo artist, fourth edition makes you want to play just because it's so damned good-looking. The characters are on cardboard standups instead of plastic miniatures, but I actually prefer that because that means they're in color. I don't have time to paint every plastic figure that ever came with a board game, so even when I'm playing games I really love, I frown at the fact that everyone is gray.

Now, several things have not changed. You still have virtually no control over where you land. You still have almost no control over winning or losing fights. You still have a country shaped like a double bed, and you still have the same thoroughly arbitrary paths to victory. The basic flaws of third edition are still here - a remarkable lack of meaningful decisions being one of them, and a game that seems to be ruled by the dice rather than your ability to outplay your opponents. If you're a snobby game nerd who thinks the best player has to win every time, you're going to hate Talisman, no matter what edition you're playing. But if you want a meandering adventure game with some cool interaction and gorgeous art, you might really dig the hell out of the new Talisman.

Now that I've played a version of Talisman that wasn't totally lame, I can see why people over the age of ten would actually want to play it. I can't say that it will be my first pick - I've got like twenty or thirty games I like better - but for an evening of light, adventurous gaming entertainment, I'll drag it out now and then. I wouldn't play third edition if you held an acetylene torch to my feet (unless you light it, then I'll play anything you want), but this new Talisman might just hit my table again.