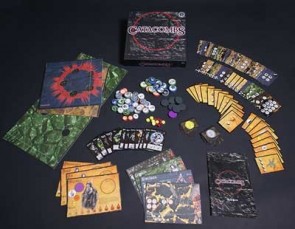 It is fairly rare that I review games anymore, even rarer that I beg a company to see if they have a review copy.

I did, and the game is Catacombs.

The reason for me to ask for a copy is that Catacombs is a genre of game that I adore, but am almost universally disappointed by: The crossover Strategy/Dex game. Usually this ends up being a skirmish game, and for every Micro Mutants, there are a ton of Clout or Packen Wir.

The hard part to get right is that you have to get a number of things right to make the game work:

1. It cannot be overly long. An hour is pushing the bounds.
2. The game has to focus on the dexterity element. That is usually the selling point.
3. It has to be relatively simple to grasp.

Whether these were actual conscious design criteria of Catacombs, the designers got it. And they produced a game that has a bit of a D&D feel that plays just inside of an hour and with a ton of disc flicking.

The game is fairly simple. Line up a set of encounters (including trips to a merchant and healer). Stick one of 4 bosses at the end and plow through the battles

Each battle has a separate small board containing obstacles. Place monsters and heroes on the boards and start fighting.

To attack, you flick your hero disc. Any enemy it touches directly takes a point of damage. Some enemies die with one hit, some require 2. All Heroes go first (in any order), then the GM gets to attack with all monsters.

That actually is the extent of the basic rules. The rest of the rules add a reasonable amount of chrome.

1. Each hero has a special power. The Wizard is particularly impressive, receiving a set of a dozen spells to use over the course of the game. He ends up being more of a defensive and strategic character.

2. Missile weapons are handled with a second disc shot from near your position. This allows you to remain in a defended location and "lean" around an obstacle to get a better shot.

3. Chain attacks allow a character to ping pong through a number of enemies, like a crazed Berserker.

4….12 Trolls Regenerate. Zombies stop to chew on things they attack. Fire Sprites become flaming obstacles. Centaurs can melee and then shoot. A couple of figures are immune to missile attacks. Each Boss has a special power as well as a "wandering monster" which is used to fill in certain slots in the earlier battle rooms.

The thing is, the game displays the kind of tactics in a D&D game. We found ourselves discussing our attack order, describing shots to work out where we could get our teammates in position to hit and even strategies to deal with each room.

At one point in each game you get to go shopping for a dozen items.

And looking over the game, you can see that more can easily be added. More monsters, more rooms (with rectangular wall shaped wooden pieces), more bosses, more items. Each room card also has a diagram indicating some room exits that clearly point to some expanded rules for dungeon layout.

Our first game went odd, however. We tore through the dungeon, entered the final boss room without a scratch on us, and were slowly bludgeoned to death by the Sorcerer in a long, painful combat. Our other games have been much more interesting. Our section game was particularly good, as we entered the boss lair with a few horrific injuries, and failed to kill the Medusa with a fateful bad decision on the next to last turn.

One thing that is a little hard to get the hang of is that there is Zero luck in the combat sections. Running a combat reminds me a little bit of Dorn. There is some skill required in the actual disc shooting element, but not as much as you might think.

Production Good:
The production is nice. The 3 boards have a nice smooth finish and a very minimal ridge in the center that never seemed to affect our shots. The wood bits and cards are heavy and good quality.

Many of the monsters also are on different color discs to make them highly distinguishable in combat.

Production Not so Good:
The art is not great. Monsters and heros look like penciled illustrations. The art is basically these illustrations tossed onto various textures. The box art itself is just the word Catacombs over some white MYSTRIC TENDRILS on a black background. None of it is overly distracting expect for one awful board texture. Particularly bad is one of the board textures that looks exactly like crumpled metallic green wrapping paper.

One of the 3 double-sided boards actually symmetric, so there are really 5 different obstacle arrangements.

Nothing that got in the way of enjoying the game here, and even a bit of sadistic enjoyment out of the wrapping paper.

Rules and player aids Good:
Overall good. There is a consistency to the rules that makes it a breeze to learn. Each hero gets a player aid that explains his power, and each monster has a rules and stat summary card to turn up. You rely need to reference the rules.

Rules and player aids Not so Good:
One item card is missing the gold cost. (Possibly this will be fixed in the full production run). We are a little uncertain about the exact rules for what happens when a disc is knocked of the board. Odds are, damage is still assessed, and markers are replaced at the edge of the board. I'm probably trying to read a little too much into the rules, but I always feel that the physical aspects of a dex game need a little more careful clarification than normal.

Chrome Elements Good:
The Item cards and wizard spells are generally well balanced. The thief completely comes into her own with a cloak of invisibility and poison dagger that allows for a perfect recreation of the D&D Thief Backstab ability. The Wizard's spells are perfect, meaning that he doesn't have to be extremely reluctant to use them, and every single one is useful in the right context. There are 10 or so different monster types, and each monster type is slightly different. This is a neat trick, given that monsters only have 1 or 2 HP.

Chrome Elements Not so Good:
The game needs more items. 6 of the 10 items come up in each game. Two of the items seem a little uninspired: (Barbarian extra Rage, and Wizard Chain Lightining), and the Map, Barbarian Axe and third missile shot for the elf pale next to the two Thief items and the Familiar.

Chrome Elements Bad:
There is only one thing that bothers me about Catacombs. The Sorcerer. The Sorcerer has the weakest wandering monster, and very few hit points. His special Boss power is that you have basically a 1/3 chance to actually hit him every time you do damage. With 4 hit points, this makes the final battle a rather drawn out affair. Even worse is the recommendation that you use the Sorcerer in your first game. This pretty much guarantees that you'll have an easy trip to the boss, and then end with a long, tedious and frustrating final combat.

Summary:
I like it. The base system works, is open to all sorts of possibilities for expansion, is extremely easy to pick up and doesn't outstay its welcome. My only serious complaints are that I want more stuff, as I could see a whole series of Descent-style expansions here.

I can spin this into a thousand different directions, and add so many crazed elements to the game. Trap discs with an effect on the label side when you hit them. Proper walls. A giant rolling ball that can only move so far each turn along a set path. Multi-room combat arenas. (I do like your idea of pit traps.) Rough patches to slow down shots. Rubber Bands around the obstacles. Multi-disc monsters linked by chains. Gelatinous Cubes. Doors that can be opened.