You Really Should Be Into...Arkham Horror 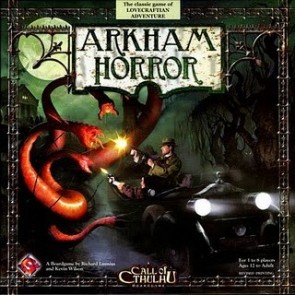 RPGs are great fun. I honestly think that some of the funniest nights of my life have been with my friends, playing an RPG. They don’t deserve the label they have as a dorky past-time, consisting of various Asperger’s sufferers hiding in Mum’s basement pushing a lead dragon around. As I’ve said many times, I don’t understand how an activity that requires social interaction can be called sad, when sitting at home playing on your X-Box isn’t.

Role-playing games do, however, call for a lot of work; especially on the part of the games master. Not only is there the running of the game on the night, but you’re generally looking at at least a week’s worth of planning beforehand. With Call of Cthulhu (AKA “The Single Greatest RPG Known To Man”), it can be even longer than that. It’s not uncommon for me to spend a month planning a one-off session.

Boardgaming, however, is relatively easy to set up. You know roughly how long the game’s going to take, you know roughly what’s going to happen and you know that there’s going to be a conclusive ending. However, it doesn’t really have the same feel as free-form role-playing. It does however, come damn close in Fantasy Flight Games’ remake of Games Workshop’s Arkham Horror.

Arkham Horror is the closest I’ve yet seen boardgaming come to being a full emulation of a role-playing game. The scope for what you can pull off is huge, and even with just the base set, you’ll never get a game that plays the same way twice. Load up on a couple of expansions and it’s very probable that you’ll never need to play another board game ever again. 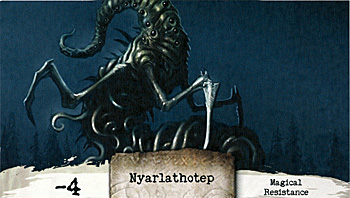 Set in the universe of H.P. Lovecraft’s Cthulhu Mythos, the central idea is that some big, bad, evil guy (Ancient One) is stirring in his or her slumber and attempting to break through into our world, which is generally considered to be a “bad thing” by most experts. The players take the roles of various characters who have been made aware of the problem via some means or the other (Investigators), and they have four options available to them: A) Close all the gates simultaneously (this has never happened), B) Seal all the gates with Elder Signs, the best magical means of stopping them breaking through (this happens about a third of the time), C) wait for the Ancient One to break through and then head-butt it into submission (this is often attempted, but never works), or D) when the Ancient One breaks through, all die screaming (this happens the rest of the time).

One of the features that makes Arkham Horror such fun to play, is that it’s a co-operative game – there is no DM, Keeper or Games-Master. All of the players take on the role of investigators, and the game itself plays the bad-guys. There are other games like this, such as Zombie Plague and Knizia’s The Lord of the Rings – but Arkham Horror ACTUALLY feels like you’re playing against a living opponent. Zombie Plague can sometimes feel rather automated, and Knizia’s game might as well have been retitled “Lemony Snicket’s A Series of Unfortunate Rapes”, but there are times when the “AI” (for want of a better term) for Arkham Horror actually seems to be plotting against you. It’s that clever.

What throws most new-comers to the game is the scope of what you can do with it. Even I’m discovering new things, and I must have played it fifty times or more. Speaking purely in terms of the potential for exploration and the size of it...in video game terms, Arkham Horror is about the size of The Elder Scrolls IV: Oblivion. Massive.

Throughout the course of the game, the players have to try and close down the openings to other dimensions that keep spawning across the board (Gates). They do this by travelling through them, having adventures on the other side, and climbing back through again.

The “adventures” both in the real world and other dimensions are handled by colour coded cards that contain a dollop of flavour text and skill challenge, which usually either rewards, or prevents “bad shit happening”. The decks are so huge (even in just the base set) that you won’t see the same thing happen very often – if at all. 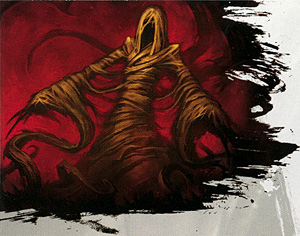 Rather than going on about the mechanics (because if you’re interested in that, you can always just read the rulebook here) this article is why Arkham Horror is so awesome. And trying to tell you why that is surprisingly hard.

Probably that largest part of the appeal is that it’s just so damn immersive. When you’ve got one player heading down to the woods, to pick up some clues, one player heading on the train to Dunwich to battle the Dunwich Horror, another traipsing through the Dreamlands to shut the gate and save Miskatonic University whilst you sit trying to fix your brain in Arkham Asylum...it’s hard not to be drawn in. Is there another board-game that offers scope and scale quite like that?

The monsters are often so hard that you’re genuinely fearing for your character’s life as they swarm past you. The travels through the harsher dimensions such as the Plateau of Leng and R’lyeh can be soul-destroying...

But you’re also pumped up for the moments of heroism, and everyone has a war story about it. Like the time Blake took down a Shoggoth whilst cursed...he needed three sixes on three dice...and he did it! Sure the Shoggoth came back to life the next turn and ate him, but that was funny, so everyone’s onto a winner here.

Or the time that I started off as a nun, and by the end of the game I was a bankrupt, naked, insane nun, cursed by God, trying to destroy Yibb-Tstll with a Derringer?

The base set of Arkham Horror goes for about £34.99, which is an absolute bargain considering the hours of play you’ll get out of it. The expansions are nice, though not necessary, additions, and vary between £14.99 and £34.99 each. It looked like the franchise was finished with last year’s Innsmouth Horror, but Fantasy Flight Games have just announced a new pack, The Lurker At The Threshhold, out later this year.

If you’re into gaming, Lovecraft or both, Arkham Horror will be right up your non-Euclidean alley.

Brad Harmer is editor and frequent columnist of www.emotionallyfourteen.com