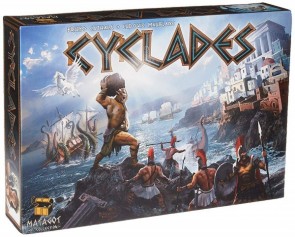 Game Name
Cyclades
Publisher
Matagot
Designer
There Will Be Games

Ancient Greeks had it really rough. For one thing, no pants. I know the Mediterranean is supposed to be mild, but sooner or later, it's got to get cold enough to make you wish you had some insulation on the ol' man gear. And if the fact that all the men had to wear skirts wasn't bad enough, they couldn't do a damned thing without getting permission from a whole panoply of tempermental deities.

You can see all the unpleasant crap Greeks had to put up with when you play Cyclades. Each player gets one of the divided nation-states of Greece and fights over islands and waterways while the gods pick at them and monsters eat their soldiers (technically, in Cyclades, only the harpy eats soldiers, but the other critters are still pretty mean-spirited). You can't so much as row a boat without getting the sign-off from one god or another, and since the fickle gods would only help one city at a time, you have to drop mad coin to make one or the other pay attention long enough to build a public toilet.

On the surface, Cyclades looks like a big-fight-on-a-map game. You have little soldiers, and you have boats, and you can have fights on land and sea. But unlike most games where you're fighting over a map, only one person every turn is going to get to do any particular action. Like if you want to attack someone, you have to bribe the crap out of Ares, and then nobody else will get the chance. Want to build a boat? Better get Poseidon on your side, or you're not building so much as a rubber life raft.

There are four different gods, plus Apollo, who is apparently a total wiener, because he does almost nothing for you and mostly just makes you suck for one turn. But on any given turn, there are exactly as many gods available as there are players, which means someone has to pick Apollo. This limited access to actions means that you'll be taking turns outbidding each other just for the chance to train a priest.

Not only do you have to pay attention to what you want to do on your turn, but you have to keep in mind that the first god in the line-up (which changes every turn) gives you first dibs on the mythological creatures that can totally wreak havoc on the game. So even if you didn't want to take a turn with Athena and educate some philosophers (who, by the way, look like Kenny Rogers), you may want to adjust your strategy so that you have the first crack at grabbing up the minotaur.

The funny thing is, with all these ugly beat-downs, the goal of the game requires absolutely no violence at all - you just have to build to metropolises. And you never have to do any violence to do that. You just call on Athena to train up some philosophers, and eventually they talk so much that buildings appear (I hear that happened in Athens all the time). Or you build four different kinds of buildings by calling on each of the four gods that actually do something, and then you have a metropolis. The only problem is, as soon as you have one of these super-cities, it's open season. So even if you didn't want to fight, as soon as you look like you have a chance to win, you'll be painting a target on your forehead.

One thing is important to keep in mind - this is not a nice game. I mean, it looks absolutely freaking gorgeous, and it's a butt-ton of fun (and that's an English butt-ton, not metric, so it's bigger), but you cannot play this game if you're not willing to whack somebody now and then. Brutal bidding wars, sudden invasions and downright mean monster attacks make this one of the most in-your-face, attack-your-friends games that ever came out of Europe. Sure, Space Hulk might have more bloodshed, but it's got nothing on the outright hostility you'll need to play Cyclades. If actual Greeks curb-stomped each other as often as these Greeks, it's no surprise they didn't have pants - they would have been changing them every ten minutes.

I mentioned this is a good-looking game, but I may not have emphasized it enough. Every color has a different sculpt for their boats and their soldiers. Five of the monsters are represented by awesome plastic miniatures. The art that decorates everything from the rulebook and cards to the boards and tiles, is stunning. The amount of work that went into making Cyclades a sweet-ass piece of eye-candy makes my head hurt just thinking about it. I mean, this is a flat-out pretty game.

I can't recommend Cyclades for every gamer alive. Some of you are going to complain about the bidding cycles and resource allocation, screaming about how real men don't play Euro games. Some of you are going to be a little put off by the fact that this game makes little girls cry. But if you're not above a little face-stabbing in your games, and you like to play awesome games, you really owe it to yourself to give Cyclades a chance. It's brutal, but holy sweet Mary, is it fun.

Cons:
Seriously brutal (may be a pro)