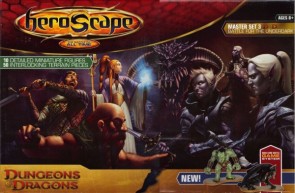 Game Name
HeroScape: Dungeons & Dragons
Publisher
Wizards of the Coast
There Will Be Games

I used to play a whole lot of roleplaying games. I played everything from small-press rags to big-dollar productions, and I played Dungeons & Dragons more than anything else. It wasn't my favorite, really, it was just that it had more modules and stuff, and everyone knew the rules. Sure, I would have rather played Deadlands or Blue Planet, but when everyone around you plays D&D, you either play D&D or you play online solitaire. And I did love to play D&D, so that worked out.

That was a long time ago, though, and I don't play many roleplaying games any more. I discovered at some point that the greatest danger in D&D was not that you might end up worshiping Satan, it was that it made it harder to get laid. I might break out D&D with the kids if they're bored on the weekend, but for the most part, those days are past. I still get a little nostalgic about it now and then, though, and so when I heard that Wizards was going to do D&D Scape, I was pretty excited.

Turns out, not everyone was with me. I was amazed at the angered masses who were furious because Dungeons & Dragons was going to wind up hip-deep in HeroScape (or the other way around, depending on who you're asking). To me, this was more HeroScape, and best of all, it finally addressed my greatest concern with the game. For years I've been getting less interested in HeroScape because of the bizarre, rather silly theme - I can only pit elves against robots and superheroes so many times before I start to see it as an exercise in tactical positioning. The story element disappears along with my suspension of disbelief, and then it's just too dry to eat up all my spare time.

But now, the story is back, and it's better than ever. I know a bunch of you may be in the 'D&D ruined Scape' camp, and I can understand that, but for me, this is like a Red Bull to the brain stem. I'm suddenly excited to play HeroScape again.

To understand what makes D&D Scape so great, I'll start with what doesn't. For starters, the new figures are cool, but that's not the hook. If I really want the figures that badly, I can always just go buy the D&D Minis. That's all these are, unfortunately. They just ran down some of the D&D prepaints and popped them onto a HeroScape base. That really feels a little cheap.

It's not the new price, either. Sure, the D&D master set is cheaper than the original, but it's not hard to see where they saved the money. You get eight dice instead of twelve. You get less than half the terrain, and only a third of the figures. It's 25% cheaper for half as much stuff, and in case numbers confuse you, that sucks. I can sure see why long-term players would feel a little rooked.

And it's not the new terrain types, either. The only new terrain pieces are dungeon, shadow and stalactites - and those are exactly the same sculpts as grass, water and icebergs, but now in shades of gray. You could create every piece of terrain yourself from the buckets of stuff you already own, using just a couple cans of spray paint and an ink roller.

With all these shortcuts and cost-reductions, it's not hard to see why the die-hard fans might feel a little misused. No more metal-winged angels fighting zombies and minutemen, no Vydar in this box or even the next wave, and the value you used to enjoy when you opened a master set dropping right down the toilet - these are good reasons to be pissed. You can't build big armies, because you don't have enough figures, and you can't build big maps, because you're short on tiles. Plus there's a common squad in the box... but just the one. So you have to buy a bunch more. Up to this point, you may feel a little like Wizards just showed you a giant dildo and said, 'here, hold this in your ass.'

But when Erevan blasts the advancing troll with flaming death, and the drow elves quit laughing and gape in horror as their greatest ally goes up in smoke, you won't be telling your friends about the exciting story of how you rolled double skulls three times in a row and left your opponent with all his order markers on the dead guy. You'll be shouting about how that one elf sorcerer ran pell-mell to escape the bloodshed as his compatriots fell like wheat, and then turned on his attacker to blast that evil troll into ashes with a last-minute attack of desperation. You're suddenly not seeing skulls, shields and wound markers. Now you're seeing dark caves and magic spells and ferocious dragons. Now the game turns into a story.

And that's where D&D Scape redeems itself. Classic HeroScape is a fantastic game, but it rarely felt like a story to me unless I built theme armies like werewolves versus vampires. It was tough to really drop into the game, or experience the immersion I used to get from a night of Dungeons & Dragons. Now, when your last surviving hero leaps atop the rocky outcropping and succeeds in beating back a host of dark elves, you'll celebrate his victory, not his die-rolling. You need smart play to win, but now you have a tale of heroics unfolding as you play.

It's not just the consistent theme that makes this work, either. The new master set includes a campaign feature that lets you keep surviving heroes from one battle to the next, and instead of building huge outdoor maps, each fight is a room in a dungeon. Sure, you can still just draft a 500 point army and battle across some uneven ground, but I could do that before. Now my fights have a purpose outside placing third in the local tournament. Now I'm fighting to stop the spread of evil!

For the old-school fans out there, D&D Scape will work just fine with the classic version you know and love. Points are balanced, figures have cool powers, and there are lots of great ways to make your people work together. Strip out the story and the license, and this is still HeroScape. It's just that now you don't get as much for your money.

I'm certainly not going to try to talk you down if you hate D&D HeroScape. I can think of lots of reasons that the execution of this set was a disappointment. I'm not going to attempt to convince you that you're wrong - but I'm still incredibly happy this happened. Because for the first time in a year or two, I'm really excited to play HeroScape again.

Cons:
So many shortcuts to save money might make you feel a little abused.