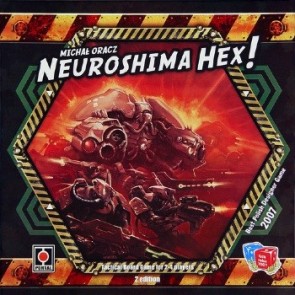 Neuroshima Hex! is based on a Polish RPG called Neuroshima, which I know nothing about, but the post-apocalyptic artwork is what initially attracted me to the game (think Fallout meets Warhammer 40k). The components are quite nice. It's all tiles and tokens, but Z-Man has matched FFG in quality. I should note that for all intents and purposes, this is a Euro, so it relies on iconography instead of text, but the icons and layout is very intuitive. The board, however, is a deceptive little beast. It's small. Stranger yet, the area you typically play with is significantly smaller. Upon first seeing it, you'll probably think, “No way is this going to work.” But this is one of those knife-fight-in-a-phone-booth games, and after playing it, you'll most likely appreciate the small play area. The extra spaces on the board are there for scenarios, of which the game comes with none, but I have yet to feel the need to even try one. The box is bigger than it needs to be. It's just five small bags of tiles and one little board, but it comes in a box the same size your average FFG box. There are expansions, but I don't have them, so I don't know if all that extra space is there so that they can fit.

I mentioned tiles. This is a battle game fueled by tile placement. Yeah, tile placement. Each player chooses one of the four factions, each one functioning differently than the others. Each faction has it's own deck of tiles, made up of units that will fight, modules that attach to units to grant boosts and special abilities, and tiles that trigger one-time actions, such a movement or battles. Players start the game with just an HQ tile with 20 hit points, then take turns drawing up to 3 tiles, discarding one, then choosing to either use, discard, or hold the other 2 tiles. Every so often a battle pops up, either from a tile or the board filling up. Stuff dies. HQs get hit. It's quite bloody. The game ends when either one player has the only surviving HQ on the board, or when one player runs out of tiles, causing a final battle, and the player with the most HP on their HQ wins.

The process from opening the game to playing it is full of little deceptions. There's the oversized box, the tiny board, the Ameritrash theme over the Euro mechanics... then there's playing it after reading the rules. After the rulebook explains that you draw up to three tiles, then discard one, it actually says, “Usually the least useful one.” I read that and thought the choice would be obvious. That there would always be a tile that would just pale in comparison to the others. Well, THAT NEVER HAPPENS. I can't tell you how many times I've drawn three tiles and found all of them to be incredibly useful to my current situation. Then there's the process of placing them. The tiles are, as the name of the game would suggest, hexes. Since most tiles don't attack from all six sides, facing is important. You'll constantly find yourself asking, “Should I have it face this way so it can attack the HQ even though it will die, or should I just keep it back to scare the opponent off from placing anything in front of it?” If you like games with plenty of opportunities to make decisions, you'll find that Neuroshima Hex! offers more than you may have expected. The other thing you don't really get from the rulebook is that there's a pretty tense build up through the game. Unless you are drawing terrible tiles (which can happen), the board will just fill up with guys pointing guns and fists (or claws, swords, etc.) at each other, like they're in a stand off. Just waiting. And like a pin drop, all hell breaks loose. Each unit has an initiative printed on it from one to three. Threes attack first, then twos, and so on. Between each round, casualties are removed, usually clearing the way for more gun fire to get to those units you had hiding in back. Modules and HQs mix things up by raising initiatives, adding attack strength, enabling attacks in other rounds, stealing powers, and other neat tricks. When you start a battle, you may think you had the outcome all figured out, but oftentimes there are details you missed, and by the time you realize it, it's too late.

There's a fair amount of diversity between the four factions. There's the Outpost, with lots of ranged attacks, and the Borgo, with lots of melee and who will usually fight first in a battle. The Hegemony has nets that disable other units, and the Moloch has lots of armored and tough to kill units. Learning how to effectively play each faction as well as how to play against the others gives the game a ton of replayability.

I didn't know what to expect from Neuroshima Hex!, but it delivered more than I could have hoped. I don't think I've owned a game that has made it to the table so many times within the first couple weeks of owning it. I've tried the game with two, three, and four players, including the four player team variant, and all of it has been good fun. With the regular three or four player rules, player elimination is a possibility, but that doesn't bother me, nor has it happened. The game has a reputation of being underrated, and I agree. There is way more fun in this game than one would expect, and I should have picked it up much sooner than I did. This is one Euro that can sit very comfortably with all those Ameritrash games on my shelf.