War For Edadh, or Let's Pick a Number Between 1 and 12 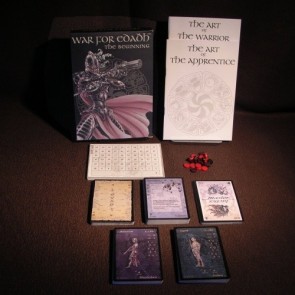 Game Name
War For Edadh
There Will Be Games

Before WAR FOR EDADH's many supporters immediately jump down my throat and tell me there's more to it than picking a number between 1 and 12, just hear me out. I know there is. But as far as an actual game goes, that's all there is.

I really hate to be the one who picks on the little guy, since I do love to see independent game companies find success with a great game, but Warrior Elite's WAR FOR EDADH will be taking a bit of a beating here. The game has won some lofty praise, much of which comes from “The Names We Can Trust.” To be fair, the game is just bursting at the seams with cool ideas. There's different styles to play, and the way the basic rules are laid out, teaching you little bits at at time, the game can be tailored to be as simple or as complex as you want it to be. Yet all these cool ideas and the customizable complexity don't really add up to actual gameplay.

WAR FOR EDADH is a fantasy battle card game. Two players form their fighting forces with cards, each card representing a single troop. The artwork on these cards are gorgeous, reminiscent of older Final Fantasy artwork (say, around FFVI). But these cards are just packed with information, so much so that the text, numbers, and iconography becomes a bit indecipherable. With the way the rules teach you how to play the game a little at time, you'll be quite far into the 2nd rule book (yes, I said 2nd rulebook) before you have any idea what much of this information is. And it will still be hard to read.

Battles are fought over terrain cards, each card tweaking the rules to the three different ranges the battle will be fought at: Ballistics, Charge, and Melee. Since you will want at least one troop for each range (or at least the first two ranges), you'll want troops that can fight well at those ranges. What comes in the box doesn't offer that many options, so I don't really count this as much of a decision making process. You're going to need to fight at those ranges, and you'd best make sure you can do it.

The real meat of the game is in the battle resolution. WAR FOR EDADH uses a system very similar to LORD OF THE RINGS: THE CONFRONTATION or DUNGEON TWISTER. Each player receives a hand of Mastery Cards, with each end of the card having a number between 1 and 12 on it. For example, the 3 card has 9 on the bottom of it. Each player selects one of this cards, places it face down, and they reveal simultaneously. Why would anyone ever play a number as low as a 1 or a 3? First off, they use less of what's called Mastery Points, or MP (everything in this game has an acronym, more on that later). You start with 50 MP. The higher numbered cards use more than the lower ones. As your units take damage, you'll track it on the same card as you track your MP, and if your MP marker ever drops below your damage marker, you lose. The bigger reason to play the lower cards is that they become higher numbers if your opponent plays a higher card. For example, that 3 I mentioned earlier becomes a 15 if your opponent plays a card between 10 and 12. If you lose, then you select one of your troops, compare the damage dealt by your opponent's chosen troop to your defense, and take damage accordingly. If you take enough damage, you could lose your troop immediately. As you lose troops, your opponent is able to combine attack values against your troops, speeding up the process of beating you into submission. This is what I called “The Slippery Slope,” meaning that as you start to lose, it gets easier to lose. I'm simplifying it a bit (there's a chance you could block the damage all together), but that's the basic flow of it. You do this three times, selecting a different troop each time, then you move on to the End Duration step. Here you check to see if you've lost, retire troops to get more MP, and if you have more cards in your discard pile than your opponent, you become shaken. If you're shaken for two durations in a row, you lose the game.

Like I said, there's a few more details to it than that, and there's more details as you go on through the rules, but none of them really add any more gameplay, just more bookkeeping. This is where WAR FOR EDADH falls totally flat. The real gameplay comes in choosing a Mastery Card and trying to read your opponent to figure out what they're going to play. If they're low on MP, they probably won't be playing the 12 card. Even knowing something like that, it's still a hefty amount of sheer guess work, since you're doing nothing more than trying to guess which of those lower cards they're going to play. Maybe they will play a high card and win that round, but they'll be hurting on MP so badly the next turn, their chances of surviving the next End Duration phase are pretty low. Everything else left in the game after picking a Mastery Card is just going through the bookkeeping. Sure, you still have to select which troop you'll use this round, but it's usually an arbitrary decision like, “Well, I won this round, so I'll use this troop because it does the most damage,” or “I lost this round, so I'll use this troop because it's the weakest.” Going through the steps after the Mastery Cards is where you'll spend most of your time in WAR FOR EDADH, and that's why I say there really isn't that much gameplay to be had.

While the rules do a good job of guiding you through the game and adding layers as you go, they're still fairly cumbersome. The part about determining if a unit is shaken is particularly awkwardly worded, and needlessly so. And there's way too many acronyms for it's own good. You'll have to juggle between MP, ML, CV, GD, GV, CB, C, U, CU. Good luck trying to keep them all straight.

The other major thing I didn't talk about was Stratagem cards. I found these to be fairly interesting. When you select your Mastery Card, you have the option to use your Tactics card. If you win this round, you'll be able to bring one of your Stratagem cards into play on the next duration, giving you an advantage over your opponent. For example, the Terrain Advantage card will give your troops a +5 defense every round.

Again, I've streamlined things a fair amount, but this is the essentials of WAR FOR EDADH. With each layer that the rules add, the core of the game remains the same: Trying to read your opponent and selecting an appropriate card for the situation. Everything after that is just legwork, which becomes more repetitive and trying than the time before. It's a shame there wasn't more to do in WAR FOR EDADH, because it really does have some cool ideas for a card game...it just doesn't seem to have anywhere to go with them.