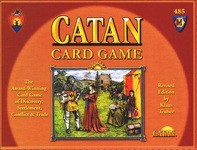 I've commented that the classic game The Settlers of Catan is one of my very favorite games. It has variety, tons of interaction, and accessible rules. In fact, I'd even venture to say that it's one of the few perfect game designs I've ever seen in my life. I honestly have no complaints about the game in its basic form.

Well, almost no complaints. In truth, I've always been irritated by the fact that it only plays 3-4 players in its most basic form. Sure, you can buy the 5-6 player expansion, but that does add some time, and most people won't be into that. But couples who enjoy the game are just plain out of luck. The Settlers of Catan simply doesn't work as a two-player game. The board is too open, trading is almost meaningless, and it just feels empty. This is where the Catan Card Game comes in.

The Catan Card Game is one of the best two-player games ever made. It takes what made the original game so good, and adapts in a spectacular way so that it can be played with just two people. As in the original version, players collect resources by rolling dice. In the board game version, these resources are represented by a hand of cards. In this case, those resources are now counted on cards that sit on the play surface, and are rotated to indicate how many resources you have of that type. Those resources can then be spent to build cities, settlements, and roads to connect them. Players are no longer on a board made up of hexes. Now the action moves to separate tableaus of cards for each player. That means that there won't be the same jockeying for position on the board.

So far that sounds pretty much like the original game, and up until this point it mostly is. There are some key differences though. The biggest one is the lack of physical board, which means there aren't those little sweet spots you sometimes can find in the original game. For those who have complained about the importance of the initial placement in the board game, that issue has been removed. Also, the dice operate differently. Instead of rolling two six-sided dice, you now roll one six-sided die, and one that is an event die (more on that one later). Each resource card is tied to one number on the die, and you start with six different resource cards. This means that every turn, you will roll and produce a new resource. This is a nice solution to those long stretches in the base game where players produce nothing.

Still, if that were all there was to the game, it would get stale in a hurry, and would merely be dismissed as a little brother to the original classic. However, the Catan Card Game distinguishes itself by providing players with a wealth of new options not available in the board game. There are numerous buildings that can be added as improvements to your settlements and cities, all of which grant little bonuses or powers. This is where the steadier production stream comes in handy, since there is a lot more to spend your resources on. The event die that I mentioned earlier ensures that some little happening will take place every round. Not only that, but there is a system of knights which grant bonuses to the player with the greatest fighting force. Finally, the addition of action cards provides a little extra whammy to the game, allowing players to steal resources and blow up each other's buildings.

And therein lies the real genius of the Catan Card Game. Since trading doesn't work great with two players (it's allowed, but rare in practice), and since there isn't a way to block each other on the map, the interaction takes the form of nasty cards to play on each other, and little moments when you steal things from each other. Everything your opponent is doing is in the open, so that means you can be quite mean to each other. Indeed, the game encourages this kind of open competition. It's a different type of interaction, but in no way is it inferior to the type of trading and dealing that happens in the original game. In feel, the game is much closer to the Cities and Knights of Catan. Indeed, many of the aspects of the card game were worked into that expansion, like the city improvements and action cards.

The game isn't perfect. The biggest problem is that there are a lot of little rules that are there for balance. It's not too difficult to remember, but it would be nice if the game had the same clean feel that it's big brother does. As mentioned before, trading is kind of empty. It's hard to not help your opponent with any trade, so most players just won't bother with it. The biggest trouble for some people will be the increased length. While the original game is often done in about 45 minutes, the card game will usually clock in at least at an hour, and usually closer to 90 minutes. It doesn't bother me very much, because it adds a good deal of grist to the mill, but just keep in mind you aren't playing Catan lite. Because of this, it's a game strictly for those who are already familiar with the original game.

As a rule, the Catan Card game is highly underrated. It distinguishes itself from it's big brother by amping up the direct competition, and finding a way to reproduce the resource management and very light civ-building of the original game, with only two players. It's an absolute must for all couples who enjoy playing The Settlers of Catan, and for people who can't always get two opponents.

As I understand it, the card game is being retired this fall in favor of a redeveloped version called The Rivals of Catan. This version will apparently be more accessible, quicker, and generally more streamlined. That's a good thing if it means that some form of the game will be in print.