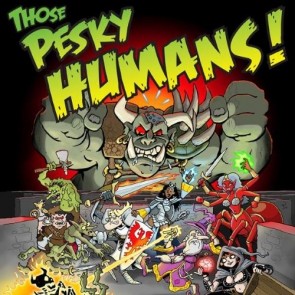 Going into Those Pesky Humans, I had high hopes, dungeon crawling is easily one of my favorite pastimes at the game table and the idea of being focused more on the perspective of the dungeon denizens, while not wholly original, promised a unique take on things. That it supposedly played quick and had good looking art was just icing on the jewel encrusted cake. However, what I ended up with was a lot of missed opportunity and middling game design wrapped in an attractive yet generic package. The bottom line is that there are a number of superior games that hit every mark this one tries for and in a world with so many options, there is no reason to settle for just alright.

It’s telling that the high point of the entire experience is the art and components. The illustration is in the John Kovalic/Sergio Aragonés style of silly and fun fantasy and it looks great throughout. It isn’t anything you haven’t seen before but it’s as good as any other work in the style. I also love the decision to use cardboard stand ups rather than minis as it really highlights the quality art and is something I’d like to see a lot more of in other games. The overall physical production is generally solid throughout, though not amazing. The tiles and stand ups are high quality board but the cards are the typical super cheapo Chinese printing; they already looked haggard brand new out of the box. And it doesn’t come with quite enough stands for the monsters/heroes.

By far though, the biggest disappointment for me is in the totally wasted premise. I’ve long harbored a desire to write a police procedural that features a detective force of monsters solving the murders and robberies perpetrated by “heroic” adventurers, so the idea of playing a dungeon crawler from the perspective of the monsters seemed great. Yet despite being sold as a game in which you “turn the tables and play as the monsters”, in practice, it plays like any other dungeon crawler with a DM or overlord. One player is the monsters and anyone else (it plays 2-4) is a hero trying to get in, grab the treasure and get out. At no point in the game does it feel like there is any special focus on being the monsters or a level of thematic detail to make it feel different than any other DMed crawl. Most of it just feels like a stripped down Descent.

The game also promotes itself as having near unlimited replayability since you build your dungeon out of modular tiles arranged however the monster player sees fit. But while at first I thought that setting up a different dungeon each time with the varied tiles and treasures would be interesting, in practice the rooms all feel pretty similar. Some of them have different equipment on them, while others impart some minor special effect, but not only were they too samey, there can’t be that much variety when you use ten tiles per game and there are only ten double sided tiles total to choose from ever. And while I’m sure there are some subtle strategies that can be implemented in their relative positioning, the overall feel was that each dungeon still felt the same to play through. Picking the once-a-game special abilities for each character was similarly disappointing; some of them seem vastly more useful than others and while a nice addition, don’t add enough difference to drive a strong sense of variety between the different possible set ups for the hero characters.

It’s supposed to be just a light silly game so some of the strategic simplicity can be excused as a conscious design choice to limit play time and rules complexity, but it’s all for naught if what is left in there isn’t well thought out. So while some of the mechanical quirks are understandable given the scope of the game, just because they are understandable doesn’t mean they are acceptable or serve to create an enjoyable experience. For example, as the bad guy player you only spawn monsters next to your leader, a dude who moves slower than my grandmother, so when the two sides start on opposite ends of the dungeon, it takes a few turns of doing pretty much nothing before you even want to think about spawning. Then, because the heroes can just run through all your dudes (opponents don’t block movement and there are no attacks of opportunity or parting shots), once you get close, they just run away. Since you can spawn any number of monsters at a time, limited only by how many spawn cards you have been banking all the previous turns, it seemed obvious to just wait until the big bad was sorta close and then crap out fifteen dudes and shred the heroes before they got to move again. So big whoop, I waited around for a while doing practically nothing and then won for doing something totally boring and anti climactic. For the heroes, their best bet is to just avoid conflict at all times, so instead of bashing your way around opening treasure chests with goblin skulls, you’re left trying to optimize your movement points to stay away from bad guys all the time.

The game play is rife with these sorts of issues that smack of amateur design and development. It feels like a game I would have made up with my D&D friends when we were kids. None of this stuff is overly terrible, and the overall ruleset is decent enough for a print and play (which is what TPH started out as), but in a $50 retail boxed game, this kind of nonsense is a deal breaker. This is doubly so when there are literally more than 100 other dungeon crawls to pick from; why choose the alright yet flawed game when you can have one of the many established classics?

And therein lies the real problem with the game; not that it’s so utterly terrible or even that it doesn’t have anything of value to offer, it’s just that the game is so derivative of every other crawler out there, both good and bad, that there is little reason to stand up and take notice. The mechanics aren’t anything special and the promise of it flipping the script and at least thematically differentiating itself from the pack is left totally unfulfilled. So in the end we’re left with yet another dungeon delve that plays out like just about every other one that came before it. I could see this going over alright with the Munchkin crowd that favors jokes and simplicity over quality game play, but even for them I think there are better picks out there.  It could also be targeted at younger players and do alright, but again, there are much better alternatives. In the end, unless you are a diehard pokemaniac game hunter who’s gotta catch em all, owners of any other quality crawler shouldn’t really bother and that’s a shame since I really wanted to love this game based on the initial premise and fun look. As it stands now, I can’t possibly see this ever getting off the shelf when I could spend the same time playing something more fun and enjoyable.

Matt Loter is member of the Fortress: Ameritrash staff.

Click here for more board game articles by Matt Loter.