DOOM: The Board Game Review 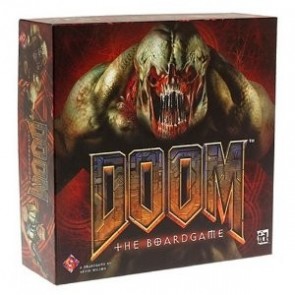 Game Name
Doom: The Boardgame
Publisher
Fantasy Flight Games
There Will Be Games

DOOM: The Board Game was released in 2004 by Fantasy Flight Games only to be unfairly maligned as being too difficult to win. This review aims to set the record straight about the real good and bad points about this game. Make no mistake though as this is ultimately a positive review about what I consider to be both the greatest sci-fi dungeon-crawler board game ever made and one of the best tactical miniatures board games ever made.

The game comes in a square box that's a bit taller than most square boxes, with solid box-art that avoids any cartoon-y look, despite having an apparently computer-modeled marine on the side. While this may not be one of Fantasy Flight Game's coffin-boxes its got enough pieces in it to qualify. To start with you get a whole bunch of sturdy map tiles of various shapes and sizes. The tile graphics are purposely understated to represent the various rooms and corridors they might be used for. The important thing from a functionality perspective is that the square grid-lines are easily identified. In fact, functional is probably the best way to describe all of the games pieces - from the plethora of well-detailed soft plastic miniatures to the many cardboard chits and specialty dice for combat. That's right, this game uses dice for combat so if you're against using the six-sided cubes then you should probably abandon this review now. Of course there are a couple decks of cards, but one is only used at the start of the game and the other is used exclusively by one of the players. Finally there is a short rulebook with many examples and a scenario booklet that contains five scenarios, which is somewhat of a negative for the game as that's not very many.

In DOOM: TBG one player is the Invader who controls all the monsters and does any setup or upkeep required for the scenarios. The other player(s) each control a single Marine character. In a way this makes the game appeal to both players who like to be competitive and those who like to play cooperative games. I usually refer to these as team-play games even if one of the teams is a single player. A bonus to having a human player controlling the monsters is they never feel scripted, even if that goes against the older video game versions of DOOM most have played. The more intelligent and reactive monsters also helps to give the game a better replay value despite the low number of included scenarios. The two sides are asymmetric with different goals and means. At the start of the game each marine is given some Skill cards that set them apart from each other. This is important to note because otherwise the marines would all be the same. You aren't going to get a pre-generated character sheet with a colorful picture for a dude named Throthgar Breathalyzer whose life story is summed up in a sentence or two written in italics at the bottom. Beyond your marines skills, his (or her) personal attributes are entirely up to your imagination. If you want him to be Sgt Psycho, a tough member of special ops who collects “souvenirs” from the bodies of his enemies and just happens to look like Karl Urban that's up to you. Altogether there are ten different weapons your marine might use during the game, most of which need to be picked up along the way. Most also require ammo that also needs to be accumulated.

I'm getting a little ahead of stuff here though so let's backtrack to what the marines can actually do during their turn. Your average marine has several options to consider. He can choose to sprint ahead 8 squares, or stay put and attack twice, or move 4 squares and attack once, or move 4 squares and place an order, or attack then place an order. The basic orders are Aim (re-roll his next attack), Dodge (force a re-roll of an attack against him), and Guard (make an interrupt attack during the Invaders turn). In order to attack a Marine needs good old Line Of Sight, which is usually easy to determine thanks to the square grid. Attacking is also where the special dice come into play. Depending on the weapon (or monster for the Invader) you'll roll specific combinations of dice. In most cases only one of the dice will have an X to indicate an automatic miss. The rest of the sides and other dice will have a number indicating the range of the attack (i.e. how many squares); possibly a bullet symbol that means an ammo token is spent, and some symbols to show how much damage was done. However, damage is only applied in increments equal to the targets Armor so the more you have of that the better. Marines start with a set number of health tokens with a first-aid symbol on them to track damage taken and when they're all gone you're dead. But wait, this is based on a video game were you re-spawn after dying and the same is true in DOOM: TBG. So you do return to play not far from where your last incarnation died. Don't think that makes things easy though since if the Invader kills the marines, called a frag in the game, a pre-determined number of times he wins.

The Invader player starts their turn by replenishing a hand of cards from a deck. The cards themselves either spawn one of the 8 different monster types in addition to what the scenario calls for or affect things more directly like causing a gun to jam or ambushing otherwise Ready marines. Should the Invader draw the last card it counts as a frag so there's no time to hang around in the scenarios. Speaking of the scenario objectives, one issue many players have with the game is scaling. In other words how well it works with different numbers of players. The starting setup in the rulebook does account for how many players are in the game so generally the less players the stronger they start out. Also, the game comes with three different colors of each set of monsters that match the three different colors of the Marine figures. If, for example, only the red and blue Marines are being played then only the red and blue monsters can be used during the game. The scenarios show which monster colors show up so that's not a problem. The problem comes with the items in the scenarios as those do not scale. So if there was one box of ammo in a room for one marine there will still only be that one box of ammo for three marines. Same goes for additional armor, health regeneration, etc. In this way the game becomes slightly harder with more Marine players. Simply adding a few more tokens can fix this, but technically it is an oversight that should have been caught inplay testing.

This game is tense and people with weak hearts should not play it. Don't come into it expecting your typical adventure game where you walk through while a GM holds your hand. The Invader wants nothing more than to kill you off. As a marine in DOOM: TBG you are just trying to survive long enough to complete your mission. You don't just walk through a door to see what's there because you know its not safe. You first prepare for what might be there and then you open it. When there's multiple marines you quickly learn to start thinking like a squad and working together. You form tactics where each marine is doing something specific like keeping an eye around that last corner or standing ready with the chainsaw or scouting ahead and running back. Oh yes, nothing makes you feel more immersed in the theme than when you need to just fucking run for it.

The game can get a bit analytical finding the optimal move for your marine, or monster if you're playing the Invader, but that's part of the fun of these types of tactical miniature games. Its their shtick and what I'm looking to do when I pull one off the shelf. Its also where DOOM: TBG's theme trumps its fantasy cousin Descent: Journeys In The Dark. Cautiously moving from room-to-room paying attention to line-of-sight and tactical advantages makes sense for a group of soldiers..Whereas a band of fantasy adventurers are practically expected to quickly hack their way through things in search of fame and fortune. Like I said, DOOM: TBG isn't about finding treasure or buying new boots, its all about survival and completing your mission.

I think this game will appeal to people looking for a dungeon-crawl style game that's a little darker in theme and light in mechanics. The length is about 3 hours and there really isn't much downtime. Plus the Invader player has just as much to think about as the marine players do so its actually worthwhile to play either side. With two-players it really feels more like a tactical skirmish game similar to Space Hulk. I'd say the game is best with two or three players, but still good with four provided you account for the aforementioned lack of supplies in the scenarios. It can also be purchased for very reasonable prices as can its sole expansion. The expansion adds a little more of everything so its good for frequent players, but everyone else is okay skipping it.