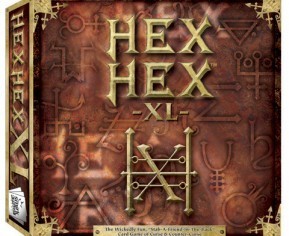 It's that time of the year for ghosts and goblins...and what better way to celebrate than to get your friends all together and unleash nasty Hexes on them?

Hex Hex XL is one of the latest releases from Smirk and Dagger Games, and comes just in time for the holiday season.  It's actually a reprint of their original game Hex Hex, but with additional expansion content included as well as three total ways to play.

The game is all about playing "hot potato" with a Hex that gets unleashed by the starting player each round.  Players use cards in their hands to deflect these nasty curses, split them in two for more mayhem, directly zap opponents, force them to discard, steal cards from their hand, all sorts of evil stuff.

Each round has a hand of five cards dealt out to each player.  Most of these cards are going to be very straightforward, allowing you to pass the current curse either to your left, right, or somewhere across from you.  Some are otherwise intricate, such as the card that forces you to discard your entire hand and randomly cherry-pick cards from opponents to play when needed.  The specialized cards are more rare than the general 'pass the curse' cards, so it's always cool and exciting when you are dealt one, as they always change up the gameplay significantly.

The starting player then points his or her finger at someone and passes the first hex (a token) to them.  That player may then respond by playing a card to deflect the curse to someone else.  Whoever that curse eventually ends up in front of--and that person either can't or chooses not to pass it further--will get zapped for 1 point of "Voice" loss as the Curse explodes in their face.  If that's the only curse left in play, the round ends, cards are discarded, and a new round begins with a new start player and each player getting a new hand of five cards.  Of course, some cards can split the curses in two or introduce new ones to the table during the course of the round, and all of those curses must be dealt with before the round can end.

You play a number of rounds equal to the number of players + 1, and at the end of those rounds, the player left with the highest "Voice" score is the winner.  That's it, it's pretty straightforward in terms of game mechanics.

The game does have an optional "Create a rule" reward for the overall victor, to be implemented on future games.  You can't create something that benefits players unevenly (such as "Joey always starts with 10 Voice") but you can create crazy rules such as "Players must touch a card to their chin before playing it, or lose 1 Voice."  Multiple games could see a charter's list worth of specialized rules layered on top of each other, until of course someone gets fed up, wins, and says, "New rule: all previous rules are ignored."  Yeah, it's that kind of game.

There are also two other ways to play it out of the box.  There's the "Vexed" variant that has special rules that will ping and zing folks who have been cursed recently.  These are almost always detrimental and gives extra incentive to dodge those Hexes.  Some of these are also quite silly, such as preventing people from speaking or laughing if they are currently in a Vexed state.  Lastly is the Hexen Stix variant, which includes five black and white wooden hexagonal sticks.  Players can play a "Grab" card, and then there's a scramble to grab one of these colored sticks.  Then, there is a reward/penalty depending on whether you grabbed a white, black, or couldn't get one at all (as there are always one fewer sticks than the number of players in the game.)

Smirk and Dagger really wanted to give this game the deluxe treatment, and it shows.  The game comes with a pile of glossy, sturdy game cards for each of the three variants; tons of tokens for tracking curses and their varying types; sturdy player Voice cards for tracking score, and glass beads for marking them; the wooden sticks for Hexen Stix; and more.

It definitely feels like a quality production for $37.95 MSRP.  The cards are a touch stiff and can be a little more difficult to shuffle, but I'll take sturdy cards over flimsy ones every time.

The glass beads are honestly nice but are too large for their score cards.  They get the job done, but either should have been smaller or the player score sheets larger.  It's a minor annoyance, though.

All of this comes in a sturdy box, which has nice compartments for everything and stores very conveniently.

This is a fun game, capable of generating a lot of laughs as you take turns zapping each other, but it is definitely not the kind of game your'e going to expect when you first bust it out.

The heavy text on some cards as well as the theme and artwork is probably going to have you expecting a different kind of game.  While you'd think you're in for a rules-heavy, deeper strategy card game, this is definitely a party game through and through.

For one thing, the small handsize each round really means that you are mostly along for the ride.  Yeah, there are short term decisions to make, especially if you are lucky enough to be dealt one of the more game-altering cards, but a lot of times you wait until you get passed the curse, then make a quick, short-term decision to pass it, if you can.  While you'd like to target the leader, you may not have the cards to pass it to them, and even if you do there's little way of knowing whether they can just pass it on, reflect it back, or so on and so forth.

The fact too that you discard your whole hand at the end of each round and draw a new hand of five completely nullifies any sort of hand management--it truly is use 'em or lose 'em.  So mostly you end up with rounds of play where folks are slapping down cards, hoping for the best, and then repeating the process.  It's fun, to be sure, but it's a sort of random zapfest where the fun is probably going to come from the folks you're playing with more than a direct consequence of the game itself.  You strap yourself in and go along for the ride.

I think there's a good, fun game in here that would very likely get bumped up to the next level with a few houserules.  I'd love to see either larger hands for each round or--even better--the ability to save cards from round to round.  We haven't tried it this way yet but I'm pretty sure we're going to try one of the other of those fixes to make the game have just a bit more strategy to it.  And of course, the game supports these sort of house-rules, as all it takes is to have a winning player introduce one of those as an "official" rule for the next game.  (We're going to fudge and just pretend that one of those rules were created previously.)

As is, it's a nicely produced, certainly fun filler that you'll have to realize up front--you're really just along for the ride, and if you're playing with a group of folks you like, you guys are very likely going to have a blast with it.

So if you're in the party game mindset, I think this will fit the bill.  Just don't expect more from it than there is, at least out of the box.  I think if you're willing to put a little into it with the crazy rules or be willing to tweak it to taste, there's much more to be gotten out of it.  I'm giving it a hestiant thumbs up--I enjoy it, but it's definitely one you might want to research first.  It's not one I'm going to be bringing to the table all the time, but it's one of those that's fun enough when I do.