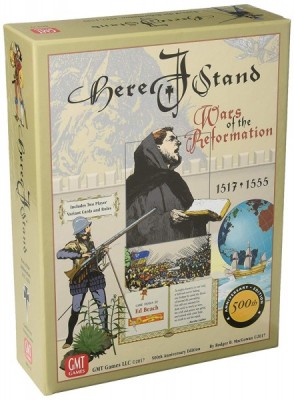 Before commencing with this review, I wanted to spend a moment dwelling on why I'm writing it. As a general rule of thumb I only write reviews for actual review copies but there are exceptions: games that I think have been criminally under- or over-rated and, in one case, because a game was a gift from a friend and they specifically asked me to. But I can think of no more compelling reason to write a review - actually a whole bunch of reviews - than to celebrate GMT Games' fantastic generosity to gamers who've fallen on hard times during the global recession, offering not only free copies of games but huge extra discounts in their yearly sale. There's little I've seen during my years of gaming that better highlights the incredible spirit of kindness and camaraderie that permeates the board gaming community, and after being a beneficiary of the scheme myself, I felt GMT deserved the spotlight for a bit. So, in recognition of their outstanding services to their customers, over the next few months I plan to review every GMT game I own. Unfortunately I already did the Twilight Struggle Deluxe edition a few weeks back: it's my favourite game and if you've not read the review or played the game I urge you to go read it. Next on the list is the multiplayer card-driven game Here I Stand.

Here I Stand is, on the face of it, just another attempt at finding a satisfactory manner in which to play a CDG with more than two. However a little digging will reveal it's far more than that. For starters although the billed subject matter of the "Wars of the Reformation" appears suitably militaristic at first glance, the actual conflicts that arose from the Reformation were so inextricably linked with the religion and politics of the era that game has no choice but to attempt to model all three in one go. A tall order perhaps but one at which the designer succeeds admirably. In doing so he highlights one of the key strengths of the CDG system and, arguably, takes the genre into new territory. It seems obvious in retrospect but the basic concept of CDG's, in which you play a card that either effects an event or gives you points that you can then spend on activating your military units is actually extraordinarily open-ended. Why, mechanically, should the effects of those events and points be confined simply to military units? The points are basically just action points after all, and just as the AP system has been used everywhere from light wargames such as Space Hulk to heavy Euros such as Tikal, there's no earthly reason why it can't see a wider use in a wargame.

So that's exactly what happens here. What, exactly, you spend your points on depends on which side you've taken, further illustrating the flexibility of the system. The Pope and Protestant players can initiate debates with one another in an attempt to control the spread of Protestantism, while the former can build religious colleges and the latter can burn books in other mechanical methods of spreading their creed. The Ottoman player can send pirates out raid the ports and vessels of Christian nations, while the three major military powers - England, France and Austria - can use points to explore the new world. That's only a small snapshot of the actions available and of course, it comes on top of the standard entertainment value of the modern card driven game. For starters there's the fairly deep strategy of raising and moving soldiers and leaders to accomplish your military, and also the agonizing choices over whether to play your cards for operations points or events and the various issues with the timing and hand management which that entails. That double whammy is enough on its own to make virtually every card driven game ever designed engrossing and worthwhile: Here I Stand offers a whole lot more thrown into the mix. With a well-researched and well-implemented set of events in the deck as well, it also manages to make the most of the often under-utilized capacity of the CDG system to teach the players some history as they game.

Of course all this variety doesn't come for free. With so many variable player powers at work you might well expect there to be balance issues but, amazingly, the game does really seem to offer all the players a fairly equal chance to win. My limited experience would suggest that the Papacy and the Austrians are a little trickier to play than some of the other powers, but the game is about as well balanced as you could realistically expect under the circumstances. What's inescapable though is the price you pay in attendant complexity and play time. The rulebook is huge, and the games are quite capable of lasting for a full day or, occasionally, more. The rules are actually slightly less daunting that they appear: veteran CDG players will find that most of the military mechanics have been imported from other classic titles in the genre, and for everyone there's no actual need to learn all the rules off the bat, only the core rules and the particular ones that are relevant to your faction. Only the Pope and Protestant players, for example, need to learn the religious struggle rules and in turn they get to ignore the rules for the New World and for Piracy. Fortunately for those of us without a limitless well of free time to dedicate to gaming religious history the game actually works surprisingly well played via e-mail although the game time can run into many months.

So far, only five paragraphs into the review, the game has already notched up a pretty impressive CV. It makes full use of the open-ended nature of an old system, thereby breathing new life into a fairly stale genre, and it introduces a high level of asymmetry without unbalancing the game. However the real triumph of this design, in my opinion, is not either of these things but the manner in which the game weaves plotting and negotiation with the other players into the very fabric its strategy and tactics without turning the whole thing into a popularity contest or otherwise compromising the depth of its mechanical decision-making. This is an incredibly rare achievement: in my opinion the only other game to have successfully pulled this trick is Diplomacy. Like that venerable title Here I Stand provides a purpose-built phase for the process where players take time away from the game board to meet and chat in secret. Unlike Diplomacy there's no need for a games master (although one can help smooth the flow of the game) and there's a lot more to negotiate over than just board position. You see, unlike a lot of other multi-player CDG's Here I Stand uses both a single draw deck for all the players and retains events that are keyed to a single power. So it's quite possible for Henry VIII of England to find himself with a hand of cards which will benefit one or more of his opponents. He could just ignore the events and play the cards for their points value but the smart operator will first be having a chat with the players concerned to see what sort of price he might be able to extract from them in exchange for playing the card as its beneficial event. Successful negotiation to ensure that the most powerful cards your side can use is essential to doing well in the game. And to ensure that players avoid the obvious route of simply ditching powerful cards belonging to their opponents, most of them are keyed to occur as mandatory events on certain later game turns, putting the pressure on the players to conclude successful deals while their cards are still worth something. And of course, crucially, these deals aren't binding, so there's plenty of scope for Diplomacy style white-knuckle treachery without, crucially, the sometimes unfortunate side effect of completely changing the game position of one of more players which can sometimes happen in the older game.

There's a fairly high degree of randomness in the game but as a whole, it's a great example of the way random factors can be used to generate excitement and tension in a game without it becoming overbearing. And a good job too since a game of this length that could switch on some bad dice would be by and large inexcusable. The first big factor is the card draw but as we've already seen the diplomatic aspects of the game tend to mitigate against the worst excesses of fortune since you can negotiate to get the events you want played. The second is that you throw a lot of dice for a lot of things: for combat, for religious debates, for the reformation and various other things using the now-common mechanic of a 5 or 6 being a "success" and (if necessary) comparing the successes thrown by each side to get a winner. But the key issue here is that you throw a lot of dice over the course of the game so the luck is generally likely to even out. Of course with six players in the mix and a lot of turns to get through it's always possible someone is going to be hard done by and that is unfortunate given that the game demands such commitment. But I think it's a price worth paying, given the thrills and variety that randomness can bring to a game.

I doubt it will have escaped your eagle-like perception, dear reader, that on the whole I've been heaping praise upon this game like there's no tomorrow. So obviously it'll be amongst my highest-rated games and something I play every other weekend, right? Well sadly not. The complexity and time overheads that I've already mentioned are pretty much insurmountable for me in terms of it seeing regular play and unfortunately it suffers from a slew of other minor issues. The map is large and papery and the artwork uninspired. The turn structure is complex and the strategy fairly deep and that leads to inevitable downtime between each player taking an action. It also really needs a full complement of six players to work properly and trying to schedule an entire free day for six gamers at the same time is a tall order for most people. Yes, PBEM gets around most of these issues but it's very, very slow and sometimes a player looses interest or is suddenly blindsided by real-life commitments and the game is never played to completion. There's also a shorter tournament scenario and set-ups for less players but they're comparatively uninspired. Although the game is well balanced I have seen occasional examples of king-making during the endgame. All this stops it getting near the top grade for me. And yet I cannot escape the tremendously cunning and unique nature of the design. It deserves respect. And by and large it's got it from all sides of the gaming community.