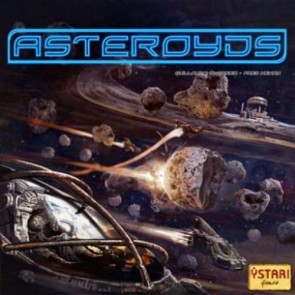 Game Name
Asteroyds
Publisher
Ystari
There Will Be Games

No, the game has nothing to do with the classic 80s coin-op.  It's a fun, Roborally-inspired romp that will let you dodge some asteroi...er...asteroyds, fly through some gates, and still make it home in time to score some major space nookie.  (DISCLAIMER:  The latter part of the previous sentence is not depicted within the confines of the boardgame, but amorous gamers should feel free to improvise.)

Asteroyds (Ystari/Rio Grande Games, 2-6 players, ~20+ minutes, depending on number of players and mode) is all about zipping your ship through some gates before your opponents do.  To do this, you program your moves on your player sheet in advance, and then carry out your orders exactly as you laid them out.

But any player of Roborally knows there's a catch, and in Asteroyds--I'm assuming the mispelling makes it XTREME--the catch is the ever-changing board itself.  You play on a board filled with hexes, and on those hexes are asteroid tokens.  These tokens are also hexagonal, having a value on each hex coorepsonding to one of the faces of a six-sided die.  They're also color-coded red, white, blue, or a combination of two of those, and move according to the values shown on the appropriately colored dice each turn.

Here's how a turn plays out:  You roll a red, white, and blue die.  Then, looking at the board, you program your movement for the turn based on where you need to go and where you visualize the asteroids ending up.  You can look at the white die and see where white asteroids near you will be moving, based on the value along the sides of that asteroid.  Your movement options are move forward; turn right and move forward; turn left and move forward; perform a 180 degree turn; and, in certain game modes, fire your blasters.  Don't get too excited by that last option though...but more on that in a minute.

You have a series of columns, each having these options in them.  You can program up to all but the last column for "free".  If you want to add that last column with a command, you forfeit the protection of your shields for a turn.  Shields protect you from either you colliding into objects in space, and vice-versa.  If you either hit or are hit by an object, you take damage, and if you take too much, you're destroyed and out of the race.  Shields can help protect against this, so if you choose to use that final column to get a leap on your opponents, better be sure.

There are different pilots as well, and each of them have a special one-time ability that you can also execute.  Hector can hit the burners and move twice forward in one go;  Dolorosa can spin 180 degrees and immediately move once in her new direction.  These maneuvers are unique to each pilot and can give you an edge on the competition.

You're on a timer, so don't think you have all day.  The game includes a small electronic timer, and you either have 50 seconds for beginners, or 20 seconds for experts, to program all your moves after glancing at the dice and the board.  To program, you simply put a transparent color token in the row you've chosen for each action.  If the timer goes off, then you simply forfeit any columns for which you have no action row selected.

Then, you move the asteroids.  First the red asteroids move two in the direction indicated on the red die.  For example, if the topmost hex facing of a red asteroid shows a 1 and a 1 was rolled on the red die, it moves in that direction two squares.  Then white moves in the same manner, matching the white die, but only one square in the appropriate direction.  Last is blue, and of the three, blue asteroids are the only ones that can "push" objects.  Like white they move only one square, but if their progress is impeded, they push the object in their way one square in that direction.

It should be noted that some asteroids are dual-colored, and will move more than once as appropriate.  A blue/white asteroid will therefore move in the direction on the white die first, and then when moving blue asteroids, it will move again based on the value on the blue die.

Once all asteroid movement is complete, then it's time to resolve your commands.  Column by column, each player executes their chosen moves.  The goal in the basic game is to fly through each of the gates on the board, collecting a token matching the symbol for that gate as you pass through.    Of course, these gates are also on moving asteroids...you didn't think it would be easy, did you?  So each move that might have *looked* like a good idea while you were setting up your turn may now either have you overshooting a gate that is now not where you expected it to be, or worse, having you go full-throttle into an asteroid that you didn't expect to be blocking your path.

The game continues until one player has gone through every gate, or only one player remains standing.  There are also other game modes, and sadly this is where the blasters come in.  One mode has you shooting each gate instead of flying through them.  Yes, this means that there is no player versus player conflict.  It would be easy to house rule, I'd think, having blasters hit other players for 2 damage, or 1 with shields up.  But since the rules make it seem like everyone just sort of...moves simultaneously, you'd have to figure something out there in terms of movement and priority, so people could actually plan when to shoot each other.  But in the rules as is, there is no player-blasting action.  Pity, that.

Most Ystari games are well-produced, and this is no exception.   You get a nice four-fold mounted board, 6 player status charts, six small plastic spacecraft, 3 dice, an electronic timer with "Asteroyds" actually printed on it, 36 thick hexagonal asteroid tokens, 6 pilot tokens (used in conjunction with their special power), 24 "target" tokens which have the symbols of the gates on them, 48 color-coded transparent tokens to match the plastic ships, and a set of rules.

The ships are a bit small, but otherwise the components are very good.  The map is large, with plenty of room.  The character sheets are all laid out logically, though it might take you a minute to realize what each row does.  The asteroid tokens will see the most use and they all look like they'll hold up to repeat plays.

The rulebook could use some help.  It isn't the best written in the world, and some things are a bit confusing on first read-through, even though this is ultimately a very simple game.  The set-up for each scenario doesn't explicitly indicate you do so by the picture, and the size of the pictures for set-up means you'll probably be squinting and carefully counting spaces, making sure you're putting everything where it goes.  Of course, there's nothing stopping you from randomizing the board, so feel free to have fun with it.  The rulebook even encourages this, allowing you to set up however you like, with fewer asteroids, in whatever configuration you wish.  The back of the rulebook even has some flavor text and paragraphs about each racer, some of it humorous.  The extra effort to personalize each pilot is always appreciated, even if it means little in the actual playing of the game.

I know this is probably going to be sacrilege, but although I appreciate Roborally and admire its design, I have never been that big of a fan of actually playing it.  Sure, you get those fun moments of driving into a pit or being swept off a moving platform, but most of the time it's about twenty minutes of fun stretched out over the course of 90 minutes.

Even though Roborally has a timer, I've found that the maintenance, dealing, and subsequent puzzling over each hand slows the game down greatly.  I love cards as much as the next guy, but in Roborally, it's all about minimizing the bad things that are going to happen on your turn.  You may want to jet forward but get dealt a hand of Turn Rights.  But most often you get a mixture of cards that you really don't want, and it's all about trying to figure out what the hell you're going to do with the junk you're dealt.  Also, because the deck of cards is relatively small, you're having to shuffle and deal nearly every turn, which can be a headache with a large group of players.  You quickly find yourself dealing more with the upkeep of the game and furrowing your brow over your hand of cards than whooping and hollering as you shred your opponent with some hot laser blasts.  Yeah, that's admittedly a lot of fun, but it just ain't happening often enough.

Asteroyds cuts out the cards, so there's no shuffling and dealing.  You know exactly what you can do every turn.  With the tight time constraints and ever-changing board, the fun comes in the chaos that ensues when you misjudge the movement of the gates and asteroids.

Best of all, without the shuffling and things like that, turns go fairly quickly.  You roll the die, eyeball the board, take the fifty seconds to program your moves, then you can even split up the duty of moving the asteroids around the board, which doesn't take nearly the amount of time you'd expect.  Also, it's fun just to watch the board unfold, as a blue asteroid smacks another into someone's path, or if someone got aggressive with their moves suddenly being rammed by a fast moving red asteroid.  Then you fire off your moves, watch the magic happen, then rinse, later, repeat.  Tag the goals or be last man standing.

Two players can easily knock this out in twenty minutes or less on their first play.  With more players, the time doesn't increase exponentially as you still get the same amount of time, can split asteroid moving duties even further, and there is little harm in players making their moves simultaneously.

So all in all, this is a Roborally killer for me, with the caveat that I'm not that big of a fan of actually playing Roborally to begin with.  Yeah, I'm not thrilled by the lack of player interaction other than keeping an eye on the progress of others, but again that is something to be house-ruled, and the game encourages players to customize the game to their tastes.  I dig the theme, like the bits, and enjoy all the chaos compacted into a tighter time frame without some of the maintenance headaches and dead turns.

* Needs more player interaction
* Although the board shifts, might feel "samey" after a few dozen plays
* Lacks the multiple maps/boards of Roborally