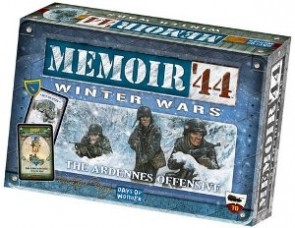 Ever since seeing paratroopers fighting in the snow during the Band of Brothers episodes Bastogne and Breaking Point I’ve been fascinated by the Ardennes Offensive. So obviously when Days of Wonder announced they were releasing a new expansion for one of my favourite military games, Memoir '44,  based on the campaign I jumped right in there and asked for a review copy before finding out much about it. When my review copy turned up therefore I was slightly surprised to discover that the spanking new Winter Wars expansion isn’t so much designed to bring the Ardennes to the M44 system but rather a supplement that uses the historical offensive as an umbrella setting to introduce a somewhat disparate bunch of new material into the game. There’s potentially something of interest to any Memoir '44 fan here so I figured that rather than do my usual style of “whole box” review, I’d break this down into the various new components in the box and examine them one by one.

The first thing you’ll notice, or at least the first thing I noticed, is a wealth of new terrain hexes. However none of them are really “new”. Rather they’re winter versions of hexes that already exist from the base game and terrain pack. In addition to standard things like hills, towns and forests the most notable inclusions are snow-covered road and rail hexes. There are also some frozen river hexes along with winter-style castles and churches which look particularly evocative nestled amongst the frost and ice. How much use these hexes are to you depends on what expansions you already own and how worried you are about aesthetics. If you own the Eastern Front expansion then the base-game terrain duplicates are doubly duplicated here, which isn’t much use unless you also own a copy of the extra-large Memoir ‘44: Breakthrough boards, in which case they allow you to construct larger scenarios. If you don’t already own the Terrain Pack then it’s worth noting that, provided you’re not bothered by the look of the thing, this expansion contains the two most commonly used terrain types from the Terrain Pack - road and rail - potentially allowing you to construct quite a few new scenarios from this expansion alone. But on the whole I find it disappointing that the bulk of the physical components provided as part of the expansion are really only useful to aesthetes.

Of course those terrain hexes are put to some use in the eight scenarios provided with the expansion. Four are for the base game (with the winter board if you have it) and the other four are breakthrough scenarios for which you’ll need that expansion. I’d be lying if I said I’d played all these scenarios but I’ve sampled a few during my review plays and found them to be of the same excellently high standard that most recent Memoir '44 scenarios have met, making full use of the new rules and units provided to offer an exciting and challenging experience, far more tactical and strategic than many of the scenarios provided with the base game. I particularly liked the new "reduced visibility" rule that emphasizes close assaults and in doing so also emphasizes the importance of Armour Overrun, offering a simple yet effective window into the Blitzkreig tactics that dominated the battle. The downside to the selection is that to make use of all those terrain hexes in the box, they’re very terrain-heavy and the breakthrough ones especially can take an age to set up. I read of one person who spent a full hour hour just putting the board together for one scenario. That sounds excessive to me, and the breakthrough scenarios take a while longer to play than ordinary ones so you’ll get plenty of gaming out of your effort, but the fact remains that setup time can certainly be an issue. I would also have really liked to see some campaign rules to tie all eight together for those who have a copy of the Campaign Book. Given that all the scenarios are from the same historical offensive it would make sense, besides helping to tie this disparate bunch of new material into a new coherent whole and I can’t see it would have been a lot of work to include one.

The next big thing in the box is a new deck of command cards. This is a curious mixture which has been put together in order to facilitate greater maneuverability for your troops. It contains two copies of most of the tactics cards from the base game, most of which have been subtly re-worded to be slightly more powerful (Medics & Mechanics for example can now be used on multiple units if you wish). The rest of the deck consists of section cards in a mix which has been re-balanced slightly to offer greater freedom of movement and which, in addition, feature a new “on the move” rule that allows you to order extra units anywhere on the board to move but not to battle, in addition to the ordered section units that behave as normal. The stated use for this deck is in the larger-board Memoir ‘44: Breakthrough scenarios where the extra maneuverability options provided by the cards offer quite a lot more strategy to the players. The rules suggest that for standard scenarios you might want to incorporate a few of the new cards into your standard deck but warn about the increased lethality of the result. I’m not sure about that as it would seem a sure-fire way to imbalanced the deck, but I do think it’s entirely worthwhile using this new deck in it’s entirety over the standard deck in some of the longer small-board scenarios like Stalingrad from the Eastern Front expansion. The new deck offers a number of advantages over the old. For starters the duplicated tactics cards mean you can never be sure you’re “seen off” a particular card in the deck. They tend to make games play to conclusion faster without sacrificing any tactical interest. The “on the move” rule also makes it easier for you to rescue single-figure units from the enemy, which was always a source of annoyance in the original game, as well as giving you more chance to make use of the terrain which is the strategic heart of Memoir '44 after all. I like the new deck a lot, although I suspect it’ll take a fair amount of trial and error to find out which standard-size scenarios it’s suitable for and which become too quick and lethal with the introduction of the new cards.

The final innovation is a deck of winter combat cards which you hold in your hand alongside your command cards and can play to influence the outcome of attacks. I may have saved the best ‘til last here: these are a brilliant innovation that really add to the depth and fun of the game. You have to have good judgment to select the best time to play your combat cards and they can be used to iron out the worst excesses of randomness in the combat system, yet they introduce more tension and excitement into the already fraught business of attacking. They also have a neat balancing mechanic in that you only get new cards when you play recon command cards from your hand: so drawing and playing the weakest command cards now comes with a benefit to compensate. My only complaint with these is that although labeled as “winter combat” cards, they’re a little generic and many would apply to any battle situation. Still, I’ve really enjoying using them, and I can see myself adding them into play of winter time scenarios from the Eastern Front expansion.

In conclusion I have to say that although I generally feel positive toward the contents of this expansion, overall the whole is somehow less than the sum of its parts. This is partly due to a value perception: it annoys me that a lot of the money you pay for this expansion is going on some largely decorative features in the shape of terrain hexes, and partly down to the scattergun approach that seems to have characterized a lot of the more recent Memoir '44 expansions. You have to wonder, for example, why the Breakthrough deck included here wasn’t included with the Breakthrough expansion originally, and if it’s a retrospective fix why is it bundled here with a bunch of relatively unrelated stuff rather than being released as a cheap standalone? Ultimately, and indeed unavoidably given the scale of material that is now available for Memoir '44, the value of this expansion is related largely to how you feel about the base game itself and what else you own from the line. If you’re a Memoir ‘44: Breakthrough fan, or you just want a relatively simple way to game The Bulge then this box is a near-necessity as it’s crammed full of great stuff that will greatly enhance your enjoyment of the game. For more casual Memoir '44 players or those who don’t own the Memoir ‘44: Breakthrough expansion, there are certainly better expansions to get first.