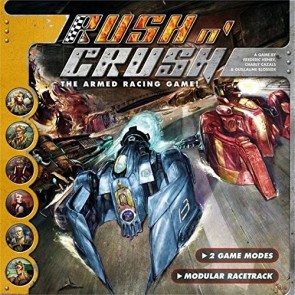 Does anybody here remember the Playstation game "Wipeout?"  Bitchin' game with futuristic racers, lots of weapons, and an awesome soundtrack.  Rush n' Crush is kinda like Wipeout, except without the soundtrack.  And also apparently in the future, racers are !#$$@# difficult to pick up.

Rush n' Crush (Designed by Frederic Henry, Charly Cazals, and Guillaume Blossier, published by Alderac Entertainment Group, 3-6 players, 1 hour+) is a game of futuristic racing and combat, where pilots careen around obstacles, push their racers to the limit, and try to obliterate their foes with machine guns and flamethrowers.

As in any racing game, the idea is to be the first to cross the finish line while maintaining your car/resources along the way, but this time, instead of simply blocking or hoping for the best cards/dice rolls, you can take it to the leaders with an array of advanced weaponry.  Unleash hot death on your opponents, dodge piles of rubble, jutting walls, and pillars, and avoid the incoming bullets from those lagging behind but gunning for your position--literally.

Like most race games, you've got some amount of finite and variable resources that really define how risks are taken.  In many racing games, the variable resource will be the actual amount of spaces you move from turn to turn, while the fixed resources usually deal in helping you work around the swings of fate that dice sometimes bring.

Rush n' Crush flips that on its ear by having your speed being the finite or fixed resource, and making the variable resource be the number of lane changes you receive.  It's actually pretty genius--after all, how weird is it to not know how fast you're going to go?  It's thematically a little strange to choose a gear, floor it, and get a variable result from that. 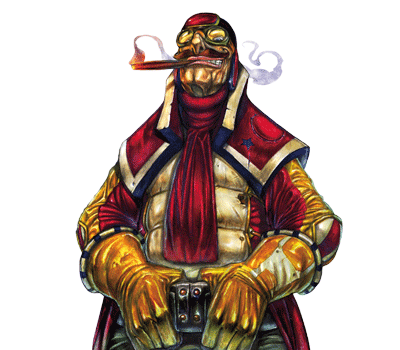 Lane changes are a cool resource to make variable because in real life, reactions *are* variable.  It's a combination of attention, perception, reflexes, surroundings, personal fatigue, experience, and training.

The speed that you're moving also determines how many lane changes you get.  The faster you're moving, the less time you're going to have to react.  Based on your speed, to the right there are a number of dice to roll.  Usually, you roll that number and keep the highest, but eventually you'll reach a threshold where you're traveling so quickly that you'll start rolling dice and keeping the *lowest* value.

Why are lane changes important?  Because on your turn, you will move your racer the amount of spaces equal to your current speed.  The number of times you can change lanes are determined by that roll.  So let's say you are heading into a sharp curve populated by racers, and at the nadir of the curve there's a giant pile of rubble.  If you're traveling too quickly, you are likely to not have enough lane changes to avoid either bumping into the other racers or crashing hard into the wall, which has the possibility to do a good amount of damage.

Of course, you might *want* to crash and bump into your fellow racers, as some of the vehicles have combat bumpers and buzzsaws for ripping and shredding everyone in your way.  You can also bump people into walls and other obstacles (which ain't nice, but it sure is fun!)

All this weaponry and crashing takes its toll on the racers.  Each car has an amount of body and heat points.  Body points get chipped away by bumping into other racers, having their buzzsaws cut into you as they try to swoop into your lane, or by going hard into walls and obstacles.  Heat is generated by pushing your engine too hard by revving high, or by the flamethrower bursts from your enemies.

Luckily, you do have some things to help you mitigate your luck, as long as they last.  Brakes can help you go down in gears more quickly should you be heading into a nasty situation.  Turbo helps by allowing you to rev even harder in one turn, but at the risk of overheating your engine.  Lastly, you have a pool of lane changes that you can use when you get into a bind, but use them up, and you're at the mercy of the dice and your insane amounts of speed.

So basically, each player in order takes turns manipulating their speed, dodging their foes and their nasty toys, and making death-defying swoops around whatever obstacles the track places in front of you.  Cross the finish line first, and you get the bragging rights.

Alderac continues to impress with the quality of their components...for the most part.  Rush n' Crush comes with ten 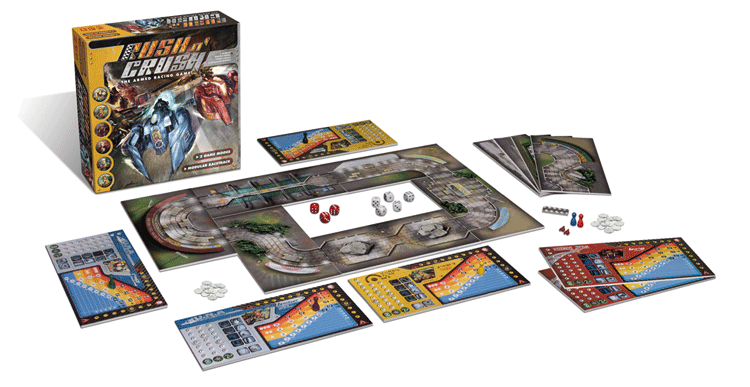 *extremely* sturdy double-sided board tiles.  These are awesome in that they allow you to make so many different types of tracks.  The beginner's track in the basic rulebook is a nice, not-so-deadly intro to the game system, but you can make whatever types of track you like.  Some of the configurations could be downright sadistic, and really force to players to manage their speed.  I was pleasantly surprised with just how many circular tracks could be made with just these ten tiles, including curves that branch outward from the normal oval and back again.  Considering you could simply make a track that moved from start to finish without looping, you've got a nice amount of options in terms of how you set up your track, keeping the game fresh.

The driver dashboards are also nice, thick cardboard.  The drivers punch out and can swap between cars on their respective teams, and each driver has their personal selection of weapons and upgrades.  Some combinations of cars and drivers prefer flamethrowers or mines...others buzzsaws and machine guns.  To be honest, swapping out the racers on a team doesn't seem like a big deal, but the six included racers give some nice different flavor as is without moving anyone around.

The little discs that you use to mark your various things on your dashboards are slipperly little clear discs that I'm not crazy about but they get the job done.  I could see losing some of these, but as far as I can tell the game ships with far more than you will need even with six players, so they've got the whole "whoops, there goes one down the air vent" thing covered.

That leaves the little cars themselves.

After hearing all the bitching about these little things, I was determined that the whole thing had become one of those "conventional wisdom" things that was simply getting repeated, and I was going to find them at the very least "not bad."  That was my goal.  And when I first took them out of the box and snapped them together, I felt as though my suspicions were confirmed.  They were small, but these little guys weren't so bad after all.

Then we played our first game with them.

I must sheepishly bow to the wisdom of the reviewers that came before me (Hi, Pete and Matt!)  These little buggers are awful.  You can't grip 'em, you'll be sliding them around as best you can, they'll fall apart, they'll slip between your fingers...they're terrible.  I will definitely have to find a replacement set.  I think I've got some of those Buck Rogers ships that you can order from American Science and Surplus left, if they fit the track, I am replacing them if at all possible.

Unless you're burned out on racing games--and I can understand if some are as there have been a plethora of them available over the years--this is a great little game.  The balance of weapons and racing is nice in that they are a real threat, but they don't absolutely dominate gameplay.  (Note:  Use the advanced rules if you want the most in weaponized mayhem, on the whole these rules make weapons more deadly.)

The notion that you are in control of your speed but your reactions may fail you just when you need them is fairly unique for this genre.  The turbo and associated heat allow players to rev hard when they feel they can accept the risk, and you can keep the throttle pegged so long as you feel you can continue swooping, dodging, and avoiding becoming a fireball of hot death.

Having the ability to drop mines and riddle your foes with bullets keeps the interaction higher than normal, and all in all it's just a fun time with a nice sci-fi theme.

And weapons.  Lots and lots of weapons.