So Say We All! - Battlestar Galactica: Exodus Expansion Review 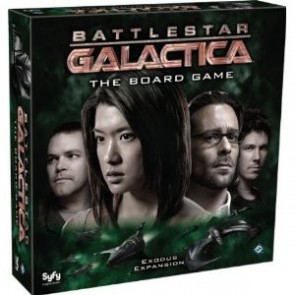 Out of the many triumphs that Fantasy Flight Games has had, none stands as tall as Battlestar Galactica. The 2008 release by Corey Koniezca is a masterpiece of thematic game design, combining harsh cooperation with palpable tension and suspicion. The game also brought a fantastic understanding of what the popular TV drama was about. Who can we trust to help us? What motives make people do what they do? And most of all, what are we willing to sacrifice in the name of survival? Pretty heady stuff for a $50 board game.

So it comes as no surprise that FFG moved quickly to capitalize on their success. In true Fantasy Flight style, they released the first expansion in 2009, called Pegasus. The expansion drew from the events of the second and third seasons of the TV show, and added lots of new aspects to the game, including new characters, a third faction of Cylon leaders, and a brand new endgame. Still, it had a fairly mixed reception. The added complexity removed the original game's accessibility, and many of the new additions felt a little tacked on. In the end, it remains a very good expansion, but one that never felt as finely tuned as the original game.

And now, 18 months later, we have the next expansion, Exodus. Fans of the game will be thrilled with the new additions, particularly those who, like me, had a positive reaction to Pegasus. The really good news is that those who were lukewarm on Pegasus might find themselves more enthusiastic with the second expansion. It's a better addition all around, and in spite of the considerable complexity spike, I think it's one of the best expansions I've ever played for ANY game.

The most basic additions are the new characters and cards. These are all-around very true to the spirit of the show. The addition of special skill check abilities on "0-strength" skill cards is an especially nasty addition, allowing crafty Cylons to throw skill checks that were once a sure thing. The new characters are all quite interesting, and at this point, we have just about every character the average fan would likely want in the game (well, and Cally). I have no complaints at all about these new components, and I'd just as soon leave them in the game all the time.

The new loyalty cards are a more extreme addition. No longer are the humans totally united in their quest for Earth. Now, a lot of the humans have their own motives and goals to fulfill. Almost all of these are bad for the fleet, but if they go unfulfilled, the humans lose valuable resources at the end of a game. When a goal is completed, the player is dealt a new loyalty card, so the deck is much more fluid in Exodus. Not only this, but the "Final Five" of the TV show have been added. If any of the Final Five are looked at by another player, they'll have to face a dire consequence. Don't be surprised to hear everyone say to not look at their loyalty cards. It's a great twist to the game, and for me it makes the game feel even more like the TV show.

The best addition to the game is the new Cylon Fleet variant. This variant involves a second board to the game. Whenever Cylon ships are activated without effect, a new ship is placed on this board. When enough ships are present, the Cylons appear on the main board to attack Galactica. The result is a much more persistant threat from the Cylons. It's a welcome addition to the game, as the original sometimes would go through long periods with no attacks at all. Not only that, but the intensified space battles make pilots much more important. There is almost always something to do in a Viper, and the new office of CAG has some of its own responsibilities. The Cylon Fleet board also has a new Cylon location for revealed Cylons. I cannot speak highly enough of the Cylon Fleet variant. It amps up the space battles, building the tension and the action around Galactica. I honestly don't think I can go back to the original method of Cylon attacks after playing with this variant.

The final addition will by far be the most controversial. The Ionian Nebula is a brand new endgame, in the tradition of Pegasus's New Caprica. Throughout the game, players will accumulate trauma tokens, both good and bad. Humans want to avoid the bad ones, and revealed Cylons want to avoid the good. Of course, there is always the possibility that the trauma token could execute your character as well. Tokens are accumulated through crisis cards, the brig, and sickbay, so it suddenly becomes a big deal when a player spend a lot of time in the brig. The trauma tokens also dictate how the rest of the people on Galactica will act, because now there are a whole stack of allies to interact with. Depending on what trauma token is on the ally, you may get a positive ability (like drawing three skill cards) or a negative effect (like cooling your heels in the brig). After an ally is encountered, a new one is added. The trick here is that the current player will now be able to add one of their trauma tokens to that ally, dictating how that ally will respond to whomever encounters them.

Towards the end of the game, each player faces a choice, called a Crossroad. These choices are game-makers, and they can swing the game heavily in either direction. As if that weren't enough, players who have accumulated the most of the wrong kind of trauma face the possibility of being eliminated (or "boxed," if you're a Cylon). That means that player is out of the game, and has to watch the last little bit from the sideline. That last part has resulted in the biggest outcry from reviews I've read, since player elimination is a dirty word these days.

I had no idea what to think about the Ionian Nebula when it was explained to me. It felt convoluted and swingy, and in truth, it is. However, it also adds a lot to the game. The player elimination is a dire consequence, as are the random executions, but it just makes it all the more important to guard against trauma tokens, since the life of your character actually does depend on it. The most impressive thing about the Ionian Nebula is that it attempts to translate the most complex part of the show into game mechanics. Emotional baggage, pivotal character moments, and deadly consequences are something that can be difficult to translate into a board game, but this variant does just that. It's ambitious and gutsy, and I really admire that, even though it's a little obtuse in places.

The only downside to this expansion is that the rules make the game much more complex. The upturn in the difficulty curve is much sharper here than in Pegasus, partially because there are more rules, and partially because many of them need to be seen in action to understand them. However, the trade-off is definitely worth the added complexity. For those who care, Exodus combines very well with Pegasus. The addition of treachery and the Pegasus ship means that the game has that much more theme and interaction.

What else is there to say? Exodus is the kind of expansion we all hoped Pegasus would be. It brings Battlestar Galactica to an entirely new level of theme and interaction. As a matter of fact, I would go so far as to say that I've never played a game system that is this ambitious in its recreation of an existing universe. It's an exciting addition to the game, very well-implemented and complete. Battlestar Galactica was already a masterpiece, but Exodus takes the game to the next level.