Get the whole family to hate you with Survive: Escape From Atlantis! 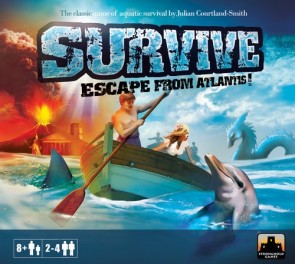 Game Name
Survive: Escape from Atlantis
Publisher
Stronghold Games
There Will Be Games

I played my first game of SURVIVE! only months before the release of the reprint from Stronghold Games.  Upon completion of the game, a rare thing happened:  I decided that I needed this game and my wife actually agreed with me.

And that's not the only thing that makes SURVIVE a rare case.  There's plenty of games out there that are revered as classics by older gamers, but for younger guys like me, it's clear that those legacies are built upon nostalgia.  But SURVIVE holds up.  The perfect balance between strategy, luck, and lightweight rules makes the game accessible to several different crowds, casual, hardcore, and non-gamers alike.  That is, unless they can't take just how cutthroat it is.  Don't let that shirtless, bored-looking guy or that friendly dolphin on the box fool you.  SURVIVE is a mean game.  You'll laugh with glee as you have sea serpents devour your opponents helpless Atlanteans, and they'll likely return that favor when the chance arises.

The game is incredibly simple in terms of rules.  The island of Atlantis is sinking, and you've got to move your guys off the island and onto the safety of the islands at the four corners of the board.  At the beginning of the game, you choose where each of your 10 Atlanteans start on the island.  Each one of them has a score on the bottom ranging between 1 and 6.  You get more guys with the lower numbers on bottom and only one each for 4, 5, and 6. Once you place one on the board, you don't get to look at the score underneath until the game is over, even if they are removed from play before the game ends.You get three moves on your turn, which you can divide up however you like.  Ideally, you want to get your guys onto the boats since they'll get to safety faster.  If you decide to take your chances with swimming to the outer islands, each swimmer can only move one space per turn.  After that, you remove one of the land tiles that make up the island.  The land tiles have information printed on the back, which populates the board with creatures, can be held to move creatures around later or possibly defend against one if they attack one of your Atlanteans.  Then you roll the creature die to see which type of creature you get to move this turn, shark (which will only eat guys in the water), whale (which destroys boats but leaves people on them safe), or sea serpent (which destroys everything).  The game ends when someone reveals the tile with the volcano on the bottom, or when all the Atlanteans still on the board have reached safety.  The score underneath the Atlanteans that made it to safety is tallied up and the highest scoring player wins.  That's right, just because one player gets more guys to safety does not necessarily mean that they won.

There's plenty of opportunity to destroy your relationships in SURVIVE, be it with the creatures or by moving a boat away while an opponent has a guy who just about to jump on it.  Yet there's an ever so subtle diplomatic angle as well.  Boats can hold three people at a time, and loading one up with nothing but your own is pretty much a guarantee that they'll be serpent food by the time they reach safety.  By allowing someone else to hitch a ride on one of your boats, you're saying, "Hey, don't sink this boat because you've got a stake in it as well."  Of course, they might be sadistic enough to sink it anyways.  One of my favorite things to do is to move the boat to an island, with a sea serpent right next to the boat.  I get my guys off, then if I roll a serpent, I have the serpent eat the guys I shared the boat with.  Murderous fun at it's finest.

Stronghold has, for the most part, done an admirable job with the components.  The larger board and tiles are gorgeous, and I really like the different thicknesses between the sand, forest, and mountain terrains.  The 3D effect is pretty cool.  I don't mind the iconography used for the information under the tiles, but for the sake of playing with non-gamers, the text as it appeared in the 80's version would have been much easier to understand. And I much prefer the old Atlantean figures over the new ones.  The new ones tend to fall over frequently when they're in the boats, which spoils the mystery of what score is underneath it.  The blue pieces have their score painted on in black, and against that navy blue, it's extremely difficult to read.  I immediately painted over the numbers in white.

Despite my small gripes over the components, Stronghold has included enough variety in the box for me to overlook them.  The rulebook has plenty of variants to try out, the best amongst them being the alternate creature dice that are included.  These dice make creature movement much more unpredictable, as one of them determines which creature moves and the other determines how far they can move.  When sea serpents can move three spaces as opposed to their usual one, the game becomes much more bloodier.  And if that isn't enough brutality for you, Stronghold has made a mini-expansion in the form of giant squids.  Squids have the ability to pull one specific person off of a boat, and even worse, off of the island.  I game with some sadistic bastards, and once we tried the playing with the giant squids, we haven't gone back.

SURVIVE flat out rocks.  It's quick, dirty, and while it's a little silly, it still has enough strategy to keep hobby gamers happy.  Stronghold has done a stand up job with the reprint, with plenty of optional rules to outshine a few issues with the components.  Anyone who enjoys a competitive game has a spot for SURVIVE in their collection, and will likely find it being a big hit amongst several different types of groups...so long as those people enjoy slaughtering each other.